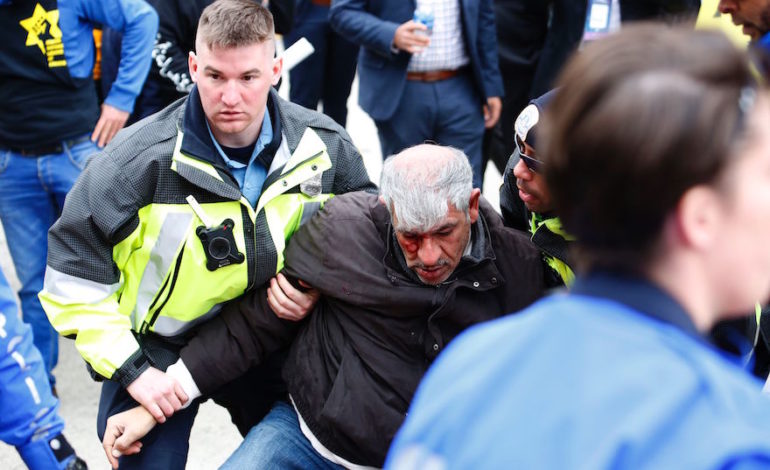 WASHINGTON, D.C. ― A 55-year old Palestinian-American instructor at a North Carolina community college was “brutally beaten” by members of the Jewish Defense League (JDL) whil
e walking through a protest outside the AIPAC conference in Washington D.C. on Sunday.

The man was identified as Kamal Nayfeh.

The JDL members “punched and kicked him and hit him in the face with flag poles, leaving him with cuts and bruises all over his face and body,” said the Institute for Middle East Understanding (IMEU) in a statement.

Photos were taken of Nayfeh after the and beatings show his face bloodied and bruised.

The video begins while the attack was ongoing, but it is unknown how it began.

After the assault, Nayfeh was treated for injuries at a nearby hospital and police arrested two assaulters.

Nayfeh’s daughter, Danya, released a statement questioning why the arrested men were not charged with a hate crime.

“When I heard the screams and found out my father was being beaten nearby, I was horrified. I ran to him as quickly as I could. He appeared stunned and his eye looked awful, all swollen and cut up. They beat him after they heard he was Palestinian. He was not threatening at all, it’s perfectly clear that my father was brutalized simply because of who he is.
The police, who were already present, took a long time to make an arrest, despite the fact that my father was assaulted in front of plenty of witnesses. The perpetrators were left to freely walk around for a while before being detained. I had to ask the police to take action. I know they could have done more to keep everyone safe from this group, and I don’t know why this wasn’t treated as a hate crime. Our entire family is shaken by this incident. Communities can’t feel safe and secure when the JDL and other hate groups are emboldened by this new hateful atmosphere we’re living in.”

The JDL was founded in New York in 1968 and was designated as a right-wing terrorist group by the FBI in a 2000/2001 report, according to the Southern Poverty Center.

Its members are responsible for attempted bombings of congressional offices and a mosque, planting a smoke bomb in New York, and a number of assaults including of beating Jewish organization staff and a holocaust survivor.