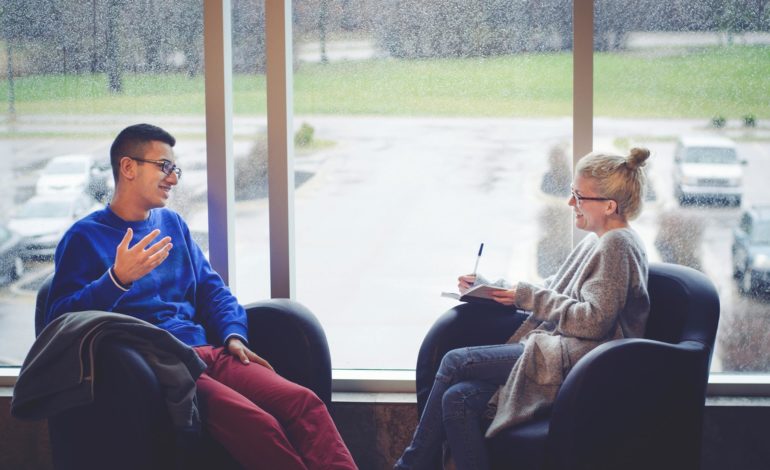 Agnes Fischer of The Solidarity 365 Project interviewing a Dearborn Muslim

DEARBORN — As local resident Agnes Fischer drove by a Muslim crowd praying outside Levagood Park and listened to church bells chiming nearby one day, she began to cry in awe of the city of Dearborn.

That scene inspired the 41-year-old photographer, HYPE Athletics yoga instructor and director of fitness and personal training to start a project that had been in the back of her mind since high school.

Using the atrium at HYPE Athletics as her studio, she utilizes her skills as a photographer and her love for one-on-one conversations to interview a Muslim for two hours and take his or her photo. She then shares the person’s photo and story on her official Facebook page, The Solidarity 365 Project.

The page now has more than 1,500 followers and receives dozens of thank you messages a day.

Fischer said the project aims to end Islamophobia by allowing non-Muslims to meet a Muslim each day of the year — breaking down barriers built on misconceptions by changing perspectives.

“I just knew if I touched a couple White non-Muslims, my job is done,” she said. “… That’s really the gist of it — just civic engagement, just trying to change people’s perception and showing what Muslims are really like… They’re normal everyday people.”

Fischer, who was born and raised in east Dearborn, befriended many Muslims and Arab Americans as she was growing up. She told The AANews she’d never witnessed discrimination in the area— until the east end students were transferred to the west end, a prominently White area.

“There was a lot of prejudice, bigotry and Islamophobia,” she said. “… A lot of high schoolers were picking on Arab kids… It just started escalating.”

She said she developed the need to protect Arab kids and speak up for them during that time, as most of her friends were Muslims. Fischer had also been looked after by Muslims after her uncle, who was her caretaker, passed away.

“I had an admiration for them and a respect for them because I felt like they were a huge influence on my life,” she said, adding that that’s when she thought of writing a book about Muslims in Dearborn.

But it wasn’t until her adulthood that anything happened.

While Fischer started off with the book, she came up with the Solidarity Project two weeks before the New Year.

“I had already started writing the book,” she said. “I was only halfway done when I was like, ‘I’m going to do that and something else…’ It was kind of a hasty decision.”

Fischer also said the atmosphere has been very positive on her page so far. She said she believes it will stay that way, but admitted that she had her doubts at first. She said she didn’t know how people would react to her page and prayed for the best.

“I was like, ‘God, please don’t let somebody come on this page and start threatening…’” she said. “That hasn’t happened and I seriously think I developed a good following [that would not] allow it.”

Fischer said she’s really happy that this project gives Muslims a chance to shine and be recognized for their efforts, especially the youth who don’t realize their significance in the world.

“I couldn’t imagine turning on the TV every day and being told how horrible [I am], how horrible [my religion] is,” she said. “[Muslims are] being persecuted by people who don’t know [them] at all and don’t care to know [them].”

Fischer said her three children are the ones to thank because they put up with her being away from home a lot with three jobs on top of her projects.

“They’re the real MVPs of this whole project and they’re always super supportive,” she said.

When asked if she’s planning to start the project again next year, she said new developments are stemming out of it.

“This is like a catalyst for other stuff,” she said. “I can’t say they’re detaching completely from it forever. The seeds are being planted; so where they bloom and develop, it will always lead back to the project.”

Describing her new plan as a surprise, she said all she can say is that it will focus on the cultural aspects of religion.