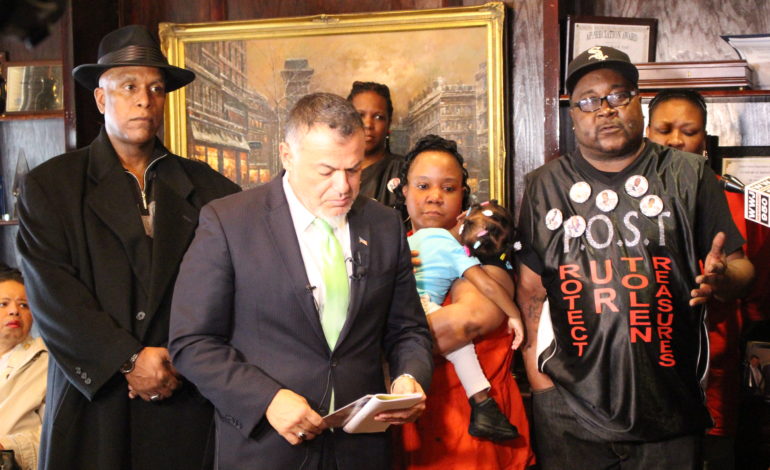 Kevin Kellom, father of Terrance, an unamred man fatally shot by ICE and Detroit Police officers in 2015 describes the moments he witnessed his son fall to his living room floor from 8 gun shots. Photo by The AANews

DETROIT — On Thursday, April 6, the mother of Terrance Kellom, an unarmed Black man fatally shot in his father’s home in April 2015, filed a $50 million lawsuit against three officers linked to her son’s death.

Nelda Kellom stated in her complaint that Immigration and Customs Enforcement Agent Mitchell Quinn had no reason or justification to shoot her son.

Nabih Ayad, the attorney representing Kellom, told reporters in his downtown Detroit office that the officers raided the home illegally with an arrest warrant, not a search warrant, before shooting Kellom.

Ayad said the arrest warrant was for robbing a pizza delivery man and a probation violation.

According to the Wayne County Prosecutor’s Office, Kellom supposedly displayed a rifle and stole money and pizzas from a delivery man on Detroit’s east side on March 31, 2015.

Ayad said a jury needs to make the decision because the case is an example of the “good old boys network” where officers protect each other no matter who is in the wrong.

He also said that Quinn was charged with aggravated assault for pointing a gun to his ex-wife’s head and was later suspended from the Detroit Police Department.

Wayne County Prosecutor Kym Worthy has previously said the shooting was justified and that the evidence supported Quinn’s story that Kellom used a hammer to create a hole in the attic floor, crawled through and dropped into the first-floor bedroom closet.

Kevin Kellom said his son had never done anything to deserve being shot.

He became emotional when describing the last moments of his son, and said that police escorted his son down the stairs and he told him to comply.

It was when Terrance stuck his arms out and said “but Dad,” Quinn immediately fired at him, the father said.

He questioned the evidence that his son broke a hole through the upstairs floor with a hammer, because it would have taken too long for officers not notice and that there would be additional officers waiting for him downstairs.

After the shooting, Kevin Kellom said a female officer, identified as Eaton in the lawsuit, asked Quinn why he shot Terrance Kellom at all.

“My son had never done nothing wrong for the police to come in this house and kill him like that,” Kellom said. “I’m not going to say he was a saint … but if he’d done wrong, you arrest him, take him to jail, let him get charged and take it from there.”