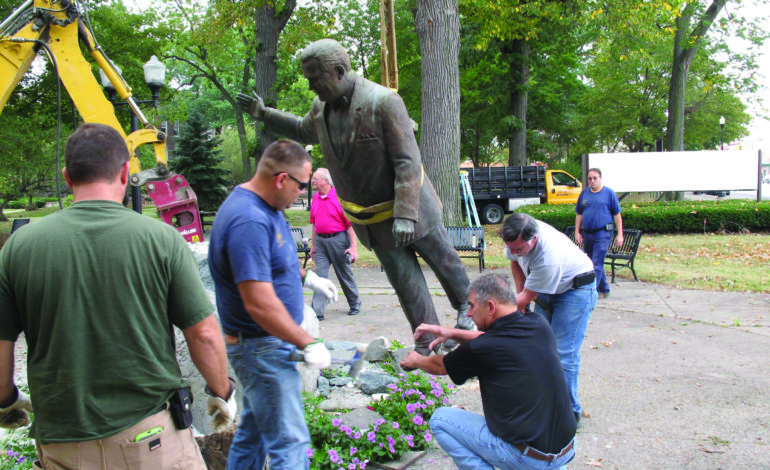 Former Mayor Orville Hubbard’s statue stood in front of the Dearborn City Hall on Michigan Avenue and Schaefer Road from 1989-2015. After much community debate, the sale of the building and national events like the Charleston massacre in 2015, the statue was removed and placed into storage. Many said it was for good reason.

Hubbard was never shy to express his boldly racist and segregationist views.

Here are just a few of the comments he made over the years: “I’m not a racist, but I just hate those Black bastards.”

“I don’t hate n—–s. Christ, I don’t even dislike them. But if whites don’t want to live with n—–s, they sure as hell don’t have to. Dammit, this is a free country. This is America.”

“They say the Jews own this country, the Irish run it and the n—–s have all the fun.”

“Some people, the Syrians (Arabs), are even worse than the n—s.”

Last week, the city of Dearborn chose to resurrect Hubbard’s statue in front of the Dearborn Historical Museum on Brady Street near Michigan Ave. Before its unveiling, the city spent close to $7,000 of taxpayer money on its restoration.

Hubbard’s likeness was prominently displayed, in front of the building, in the shadow of the American flag, with no historical context of his disgusting views on race and diversity.

His statue has no place in today’s Dearborn.

These days, our city is getting more diverse by the day, and non-White immigrants have rebuilt many sections of our city, namely the flourishing avenues of east Dearborn, where Arab American businesses abound.

Surely, Hubbard, if we judge him by his own words, would denounce that development.

He did what he did and said what he said during an era of civil rights. He was on the wrong side of history then, and he is nothing to celebrate now.

How do we attract new businesses and young families when we rejoice in Hubbard’s legacy? Are his ideas what we strive to be today? We hope not.

Some will say he was a strong executive who kept the city clean, took care of our parks, and picked up the trash on time. That may all be true. But his ongoing legacy was that of his unapologetically bigoted rhetoric.

In fact, he was such a well-known racist that the New York Times reported his death in 1982. The Times didn’t do that because he was great at shoveling the snow.

If anything, Hubbard’s statue should be inside the museum, accompanied by a full and accurate accounting of his history, from his administrative achievements to his racist proclamations.

Celebrating his legacy with an out of context statue is an affront to Dearborn’s diversity and to our Arab American community in particular.