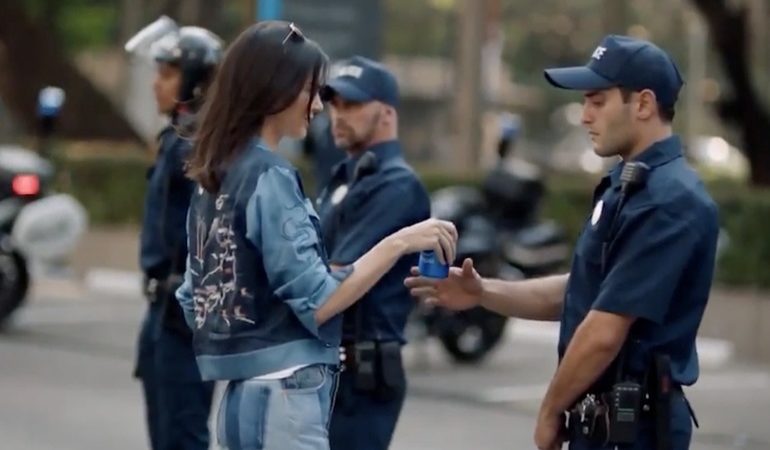 The ad, released late on Tuesday, shows Jenner, a model and reality TV star, in a photo shoot when she notices a protest march passing by her location. She joins the crowd as it nears a line of police officers.

Jenner approaches one of the officers and hands him a can of Pepsi, prompting the officer to smile while marchers cheer and hug.

The spot drew immediate criticism on Twitter for belittling the street protests seen across the United States over the last few years following police killings of unarmed black men and teens.

While the ad does not make clear what the protest opposes — the only clues being peace signs and a background song with the lyrics “we are the movement this generation” — observers were quick to condemn it.

“If I had carried Pepsi, I guess I never would have gotten arrested. Who knew?” activist DeRay McKesson, one of the best-known voices of the Black Lives Matter movement, said on Twitter. “Pepsi, this ad is trash.”

“The Kendall Jenner Pepsi fiasco is a perfect example of what happens when there’s no Black people in the room when decisions are being made,” added comedian and writer Trayvon Free.

PepsiCo described the online and television ad it called “Jump In” as the start of a new campaign.

“The ‘Jump In’ Pepsi Moments film takes a more progressive approach to truly reflect today’s generation and what living for now looks like,” Pepsi said in a statement posted online before the controversy flared.

Pepsi officials did not immediately respond to a request for comment on Wednesday.

The police in the ad were clad in black shirts and baseball caps, a contrast to the heavily armored presences seen at anti-police-violence protests in cities from Ferguson, Missouri, to Baltimore.

Some online commentators called out the stark differences by posting an image taken by Reuters photographer Jonathan Bachman in Baton Rouge last year showing a Black woman in a dress standing passively as police armed in riot helmets and heavily padded suits took her into custody.