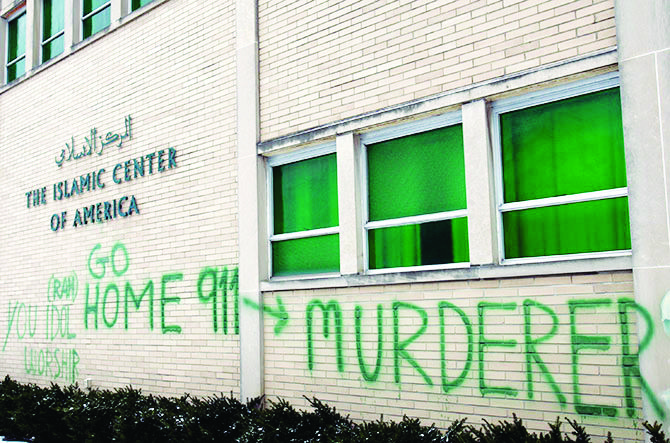 On Thursday, April 6, the U.S. Senate unanimously passed a resolution condemning hate crimes against ethnic and religious groups, and vowed to push for establishing appropriate measures for the reporting and prosecuting of violence against minorities.

Amid rising attacks on individuals and places of worship in Muslim, Sikh, Jewish, African American and LGBTQ communities, the resolution (SR 118) calls on federal law enforcement to work with state and local officials in investigating reports of these incidents and bringing offenders to justice.

It also aims to offer federal assistance to victims and enhance security at places of worship, and encourages federal law enforcement officials to improve required reporting and expedite its investigations of hate crimes.

The national organization works to engage Muslim Americans in the political process and ensure legislation is more equitable for the community nationwide.

Alzayat told The AANews it was drafted in response to the increasing, yet underreported number of hate crimes.

By passing the resolution, the Senate promises to provide support for federal, state and local agencies to establish a task force to hone the process.

He said with help from the Muslim Public Affairs Council (MPAC), they approached Sen. Harris, whose office was “receptive” and helped refine the language before introducing it to the Senate. Harris then added her name as co-sponsor and engaged with colleagues on both sides of the aisle to advocate for bipartisan support, Alzayat added.

The resolution spent about three weeks in the Senate, where its language was refined so that it would receive backing.

All 100 members of the Senate signed it.

Alzayat said there’s a perception in the Muslim American community that government officials and Congress hold troubling positions against Muslims. However, he said this victory shows that when there is professional and persistent engagement among Muslim communities to work within the political system, they can impact how Muslims and Arabs are viewed or treated.

He added that there is currently no legal mandate on compiling data on attacks against Muslim Americans in national or state law enforcement departments.

When an attack on a Muslim American or a house of worship occurs, local law enforcement officials tend to investigate and prosecute the case as a criminal affair, just as the Chapel Hill Police Department charged a man who fatally shot his three Muslim neighbors with a crime “motivated by an ongoing neighbor dispute over parking.”

Alzayat said he hopes the resolution will encourage local officials to view the attacks holistically; and that if found to be hate crimes, law officials begin to prosecute the crimes as such. That higher degree of punishment would act as a deterrent, he added.

In March, Secretary of Homeland Security John Kelly released a statement in response to the onslaught of hate crimes.

“I strongly condemn any violent acts to perpetuate fear and intimidation not only against individuals, but entire communities,” Kelly said in the letter. “I pledge the full support of the Department of Homeland Security to assist local, state and federal investigations into these incidents.”

Senator Harris said in a statement she is proud to lead the unified voice of a bipartisan group of senators to condemn the rise of hate crimes that target minority communities.

“Many of our constituents have been directly impacted by the unconscionable rise of hate crimes and hate-motivated violence in the United States,” she stated. “Law enforcement must do more to ensure minority communities are secure.”

Senator Collins said in a release that the resolution sheds light on “cowardly acts” and calls on law enforcement officials to thoroughly investigate hate crimes and take steps to prevent them.

Senator Feinstein said the rise in hate crimes is in part due to “the perception that people in positions of power are indifferent and do not prioritize protecting the rights of all Americans.”

Senator Rubio wrote in a statement that with many Americans feeling discouraged by “divisiveness and animosity, it’s important to make it clear that we stand united in condemning the targeting of anyone simply because they are different.”

“We stand united against such violence and discrimination, and encourage law enforcement at all levels to work together to curb these actions,” she said.

Hate crimes by the numbers

A 2016 Southern Poverty LawCenter (SPLC) report revealed a spike in anti-Muslim sentiments was at the forefront of documented hate crimes and a 14 percent rise in hate groups for the first time since 2010.

The number of assaults reached its peak with 481 hate crimes in 2001, following the 9/11 attacks. Anti-Muslim harassment totaled 4.4 percent of all hate crimes.

Michigan had the highest number of hate incidents in the Midwest in the 10 days following President Trump’s election.

There were at least 40 incidents involving bias against African Americans, Latinos, immigrants, Jews, Muslims, LGBT and others in Michigan in the period following the Nov. 8 election, 18 of them involving suspects who mentioned Trump, according to the SPLC report.

The center said there were 867 hate incidents nationally post-election. Michigan had the sixth-highest number of hate incidents during that time period.

Despite the increased number of such cases, there are differences in data regarding how many hate crimes actually occurred.

Data from the FBI suggest there have been fewer than 6,000 hate crimes within the past decade. However, the Bureau of Justice Statistics’ victimization phone survey reported just under 300,000 incidents.

But not all states report every hate crime that occurs. Only 41 of 203 hate crimes recorded in Maryland were reported in FBI data, according to the Huffington Post.

Other problems include programs not correctly distinguishing whether an incident should be counted as criminal or non-criminal.