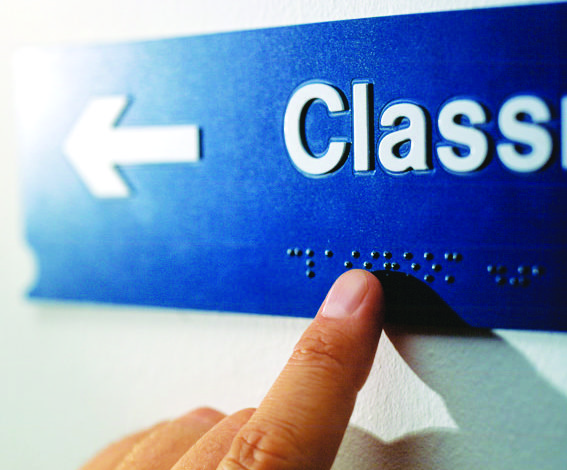 DEARBORN — It can be challenging for a disabled student to get around his college campus. For the blind, painless navigation through a maze of hallways, stairs, elevators and classrooms depends on accessible passages and braille labels.

However, Khodr Farhat, a visually impaired University of Michigan-Dearborn student, discovered something odd about the signs while roaming the campus during his first months there. Many of the braille prints were incorrect and there were no signs where there needed to be.

Braille is a writing system for blind or visually impaired people in which varied arrangements of raised dots representing letters and numerals are identified by touch.

Farhat approached university officials, who verified the flaws and have begun working with him in a multi-year process to fix them.

For his efforts, Farhat was one of 50 students to be presented with the university’s Difference Maker of the Year Award on Wednesday, April 12.

He was nominated by 11 UM-Dearborn staff, including professors, the dean of departments and the chair of the language school.

The 23-year-old political science major said he walks throughout the campus often and that many students have become familiar with him.

But despite Americans with Disabilities Act regulations and university consultants working to ensure campuses and public spaces properly accommodate handicapped individuals, he found inconsistencies that made it more difficult for him to find his way to his classes. He also uncovered unsafe environments.

For example, a blind person on the way to the second floor would read a braille sign stating he or she was on the third.

About a month ago, Farhat contacted the university’s health equity department, disability office and chancellor’s office to report the mistakes.

In doing so, he also met with a group of challenged students and focused his efforts on addressing concerns regarding inaccessible parking spots, ramps, elevators and classroom desks.

He also said he used to notice unattended vehicles and construction equipment left at entryways on campus.

“If I run into an unattended truck, I can hurt myself,” Farhat said.

Farhat said changes are already underway, in line with the administration’s three-phase project to update 30 buildings on campus for improved accommodation. The first phase will be complete in about a month.

In recognition of Disabilities Awareness Month last October, UM-Dearborn sent out a mass email urging campus community members to be aware of students and faculty with special physical limitations, enabling them to safely navigate on campus and throughout campus buildings.

The email provided tips like being vigilant of one’s surroundings, not blocking hallway or entryways and taking the time to become better informed about people with disabilities.

He was also appointed as a disability affairs council member by the administration at U of M’s main campus in Ann Arbor, where there are plans to review all braille signs.