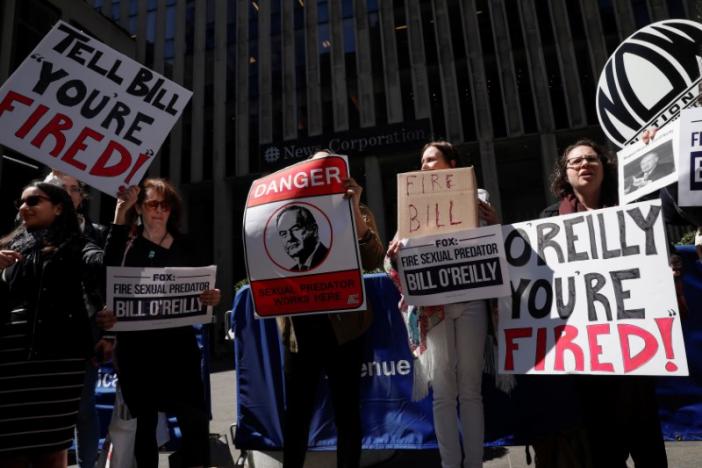 O’Reilly said in an April 1 statement that he had been unfairly targeted because of his public prominence. Marc Kasowitz, O’Reilly’s lawyer, said in a statement on Tuesday that the television host “has been subjected to a brutal campaign of character assassination that is unprecedented in post-McCarthyist America.”

It is not known exactly how Fox News will handle O’Reilly’s exit or whether he would be allowed to say goodbye to viewers on the air, according to the New York magazine report.

Representatives at Fox News and its parent Twenty-First Century Fox Inc were not immediately available for comment. A representative for O’Reilly, who has been off the air on vacation since April 11, declined to comment.

A Vatican photograph showed O’Reilly shaking hands with Pope Francis after a general audience on Wednesday, but it was not clear if the Pope knew who the television host was.

The New York Times reported on April 1 that Fox and O’Reilly, a 20-year veteran of the conservative cable network, paid five women a total of $13 million to settle harassment claims. The five women who received settlements either worked for O’Reilly or appeared as guests on his program, according to the New York Times story.

O’Reilly said in the statement at the time that he had settled only to spare his children from the controversy.

O’Reilly’s exit follows that of former Fox News Chairman Roger Ailes, who was forced to resign in July after being accused of sexual misconduct by a number of women, including former anchor Gretchen Carlson. Ailes has repeatedly denied any wrongdoing.

“The O’Reilly Factor” is the most watched program on Fox News and is coming off the highest-rated first quarter in its history, averaging 4 million viewers, according to Nielsen.

Investors seemed to take the news in stride. Shares of Twenty-First Century Fox were down less than 1 percent at $30.50 in Wednesday afternoon trading.

O’Reilly’s departure will not have any effect on Twenty-First Century Fox’s overall profitability, said Brian Wieser, an analyst at Pivotal Research.

Media mogul Rupert Murdoch and his son Lachlan are co-executive chairmen of the company and son James is chief executive officer.

“They could literally go dark during the time his program airs and they would still be profitable,” said Wieser.

A bigger issue for investors is what the Murdochs will do to prevent the company being in the headlines again just a few months from now, Wieser said. “That’s bigger than O’Reilly,” he said. “The cultural issue is a big issue.”