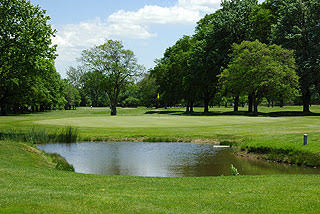 DEARBORN HEIGHTS — Following months of passionate resistance by Dearborn Heights residents against the sale of the Warren Valley Golf Course to developers, Wayne County decided to sell the property.

However, the site was not bought by real estate developers as originally intended. Rather, the county is contemplating selling to Dearborn Heights at the $1.8 million price originally offered to Delta Management.

Dearborn Heights Mayor Dan Paletko said the city would be able to find the funds to purchase the golf course without a bond or special finances, reassuring patrons of the golf course and opponents of a sale to Delta Management that ongoing negotiations to keep the green space were “looking good.”

The Dearborn Heights City Council, heeding to the demands of its constituents, voted against the original proposal on a 5 to 1 margin on March 14. The reasons for the vote included the negative environmental impact of the proposed real estate development projects on a floodplain, a consensus for the preservation of wetlands and concerns over an already crowded school district. A March 20 letter to Wayne County Executive Warren Evans from Mayor Paletko   expressed desire from the mayor to negoiate for the city of Dearborn Heights to purchase the Warren Valley Golf Course from the County.

In response, Evans agreed, on behalf of the County, to “sell Warren Valley  to Dearborn Heights for the same sale price of $1.8 million.”

Concerned residents, many in opposition to the initial plan, filled the seats of the youth room in the Caroline Kennedy Library Monday evening to take part in a public meeting about the future of the golf course.

Many of the attendees included members of the “Save Hines Park” Facebook group, an assembly of community members organizing for the specific purpose of opposing “Wayne County’s plan to sell the 250 acre Warren Valley Golf Course in Hines Park to build a housing development in the Rouge River floodplain.”

Paletko, Wayne County Commissioner Diane Webb (D-Dearborn Heights) and Councilmembers Dave Abdallah, Ray Muscat and Lisa Hicks-Clayton facilitated the discussion. Some congratulated the residents on their efforts to stop development of the property.

A City Council resolution allows Paletko to open discussions with legal counsel to purchase the property on behalf of residents to keep Warren Valley a green space. The purchase by the city was discussed as the only alternative to selling the land to the developer.

Earlier this month, an anonymous page administrator for the Save Hines Park Facebook group opined, “The Huron Clinton Metropark Association is closing[…]golf courses, but they are planning to keep them parkland. Why can’t Wayne County do the same?”

Should Dearborn Heights purchase the golf course, it will not seek any kind of tax abatement over the property.

“Once that housing goes in, most of our property values are going to drop and its going to flood,” Paletko said about potential development. “That’s why I think it’s important that the city purchases it.”

Webb reported receiving more than 2,000 letters in opposition to any real estate development on the course.

She said she was “extremely proud” of the volume of concern expressed by residents. Having been commissioner for eight years, she said she never “got more than five or six letters on anything.”

The mayor and commissioner added that if the city is to purchase the golf course, a thorough vetting on the drainage system in the area would need to be instituted to benchmark the property’s management. Many residents and officials agreed with the Army Corps of Engineers’ strong advisement against development on natural floodplains.

The next round of negotiations, according to the mayor, will take place in a closed meeting. The closed door negotiations, he said, will be completed in “a month and a half.”