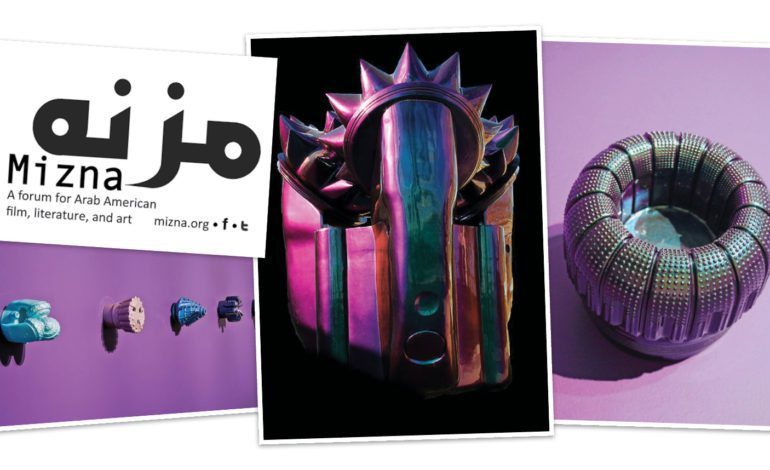 TWIN CITIES, MN — Since its inception in 1999, the literary journal Mizna has been a platform for the arts and free expression of a multitude of writers and artists from an Arab and Arab American nexus.

The journal, published by Mizna.org, a non-profit arts organization that promotes contemporary expressions of Arab American culture, balances its local niche with a nuanced global perspective to deliver a balanced picture embodied in the multifaceted experience of the Arab diaspora.

Featuring musicians and artists, poetry and essays, Mizna is a multi-disciplinary publication that seeks to capture a multitude of voices, issues and perspectives.

Mizna.org also focuses on providing a forum for Arab American art and expression, and the journal can be found in cultural centers, museums, libraries and cafe tables all across the United States.

The award winning journal produces a film festival as its core program, along with other projects. Its yearly film festival draws heavily from Arab World film through artistic depictions true to humanistic themes.

According to Mizna Program Director Moheb Soliman, the film festival depicts experiences that thematically “tie into the diaspora.”

That voice, Soliman explained, exists in artistic expression. “Rather than us having a political mission, [Mizna] is much more about being an organization that can be a main platform for the Arab American experience.”

“We really think of ourselves as a platform for Arab American artistic voices out there to speak about their experience in the literary and cinematic sphere,” Soliman told The Arab American News.

Mizna’s aims aren’t oriented in politics, yet the platform intersects with communities and movements oriented in social justice and activism inspired by both its global orientation and its niche locality.

Mizna is … about being an organization that can be a main platform for the Arab American experience.” -Moheb Soliman

The literary journal, put out twice a year, centers each publication around a theme that underscores the content and orientation of the submissions. It’s next theme, set to be published in its summer 2017 volume, navigates through the idea of “Surviving.”

Gary Paul Nabhan, a writer and ethnobotanist, was guest editor of Mizna’s most recent environmental issue.

In addition to his biological work, Nabhan is also a highly successful author and published poet, creatively calling for the future of not only ethnobiology but also of the planet.

The literary organization also teamed up with longtime partner Northern Lights.mn, a multimedia arts organization, and the Anthropocene Awareness Association to put on a panel discussion in February on the topic of the environment in the Arab World.

The journal, which always includes a visual artist, featured Senegal-born Kuwaiti artist Monira Al-Qadiri, who built pearl-based sculptures seeking to capture “the exploitation” of pearl and oil, materials that are both on the same color scheme, reside on opposite ends on a dichroic color spectrum and are symbolic staples of Kuwait’s natural and economic landscape.

The art, both in its symbolic contrast of materials and thematically relevant combination of organic material, juxtaposes oil— dirty, volatile and environmentally unsustainable— with pearl, which is native to Kuwait’s shorelines, as an iconic natural material symbolizing the essence of her country.

Big oil’s displacement of pearls, Soliman explained, created a critical demand on the environment that Al-Qadiri puts at the forefront of the environmentally-minded Arab American conscience through her art.

In addition to its extensive multidisciplinary featuring of artists, musicians, poets, essayists and activists, Mizna is also involved in its community through its provision of workshops and cultural development events.

In 2004, Mizna opened up as a tangible space to hold classes, workshops and events. The center’s classes include Arabic language classes, from the conversation-based level to the advanced.

As a small journal that captures the diversity of Arab and Arab American experiences across the diaspora, Mizna effectively offers nontraditional perspectives and insights on global and humanistic issues with a unique sense of Arabness.

Soliman described himself as “amazed” that the Arab American literary platform was incubated and thrived outside of the Dearborn or Detroit area, yet he describes this aspect as having enriched the multidimensional character of the journal. He described the Minneapolis-St. Paul Twin Cities area where the journal is headquartered as a locality that has interwoven the publication with the strong culture of intersectional social justice and activism characteristic to Twin Cities.

“As a minority,” he said of being in a city where Arab Americans are not the dominant minority group, “[you] feel yourself as American, [and] live a very hybrid life and a hybridized experience.”

In giving justice to a world-view that is eclectic and nuanced, the journal dispels the myth of stagnant and antiquated Arab artistic expression that ended after Scheherazade’s one-thousand and one nights or Nizar Qabbani’s last poem, showing that Arab art is timely, intersectional, current and alive.