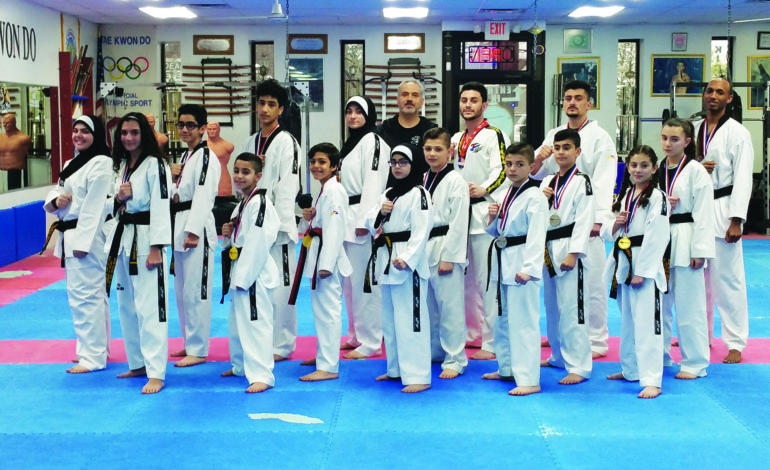 DEARBORN — On April 8, 16 of Koubeissi Taekwondo School’s students of various ages and divisions finished strong at the Michigan State Taekwondo Championships, all qualifying for the 2017 USA Taekwondo National Championships.

Many of the students had fought and won medals in previous state tournaments, so the success is not new to the accomplished school.

“They train so hard,” Koubeissi, founder of Koubeissi Taekwondo School, told The AANews, regarding his students. “They’ve been training for six months and now we still have three months to go for nationals.”

Koubeissi said he believes his students are ready because they’ve gained experience competing at several tournaments, not just the state championships every year.

“Nationals is different,” he said, revealing the importance of it to every competitor. “…If you place, you set a record for the future… For example, Hameed placed third in the U.S. and so he got a chance to place this year maybe second or first.”

As number three in the U.S., Master Hameed Dakroub, 27, qualified as one of the top seeds to go to the U.S. National Team Trials last year.

“It’s one of the hardest competitions in the U.S.,” Dakroub said. “You’re competing with all the former Olympic medalists.”

He said he came up a little short, but he’s proud to be ranked number three in the country and to have another shot at it this year.

Since Dakroub, who is in the adult division, qualified for nationals, he didn’t have to compete in the state championships. Instead, he coached alongside Koubeissi and a few of his contemporaries.

“It’s always fun to see [the students] transition to more difficult divisions,” he said. “To see them grow and to see them compete is just fun. It’s great for everybody.”

Master Afiel Da Silva, 25, both competed and coached, garnering a silver medal in the adult division. The second place winner discovered a lung inflammation after competing.

“It can be athletically induced,” he said. “But I kind of just pushed through and kept fighting.”

Zeinab, 15, said she hopes to make it to the Olympic team one day and wants to also instruct students, like her father. When she wasn’t competing, she coached younger students at the championships, along with Nour Mehdi, 18, a black belt who chose to volunteer rather than participate.

Hussein, 10, said he felt a little pressured because like many children, he looks up to his father and wants to make him proud.

Another 10-year-old, Zayn Hojeije, placed second in his division.

“I was nervous when I was getting ready to fight,” he told The AANews about his match. “Then, when I started to fight, I felt good.”

The youngest of the group, Ali Obeid, 9, won gold.

The excited champion said it’s his second time winning gold, but this time it’s different because he’s going to the nationals.

As for the nerves, they did kick in a little bit before the match, but then he felt much better.

When asked why he likes Taekwondo, Obeid said, “This is what I do.”

Youssef Hojeije, 12, qualified for the nationals automatically because officials mistakenly did not allow him to compete.

The 2017 USA Taekwondo National Championships will be held from June 29 to July 6 at Cobo Center in Detroit. The competition was last held in Detroit in 2008.

Koubeissi encourages the community to come and cheer on their competitors.

“Everybody should come and watch, especially since it’s in our hometown,” he said.