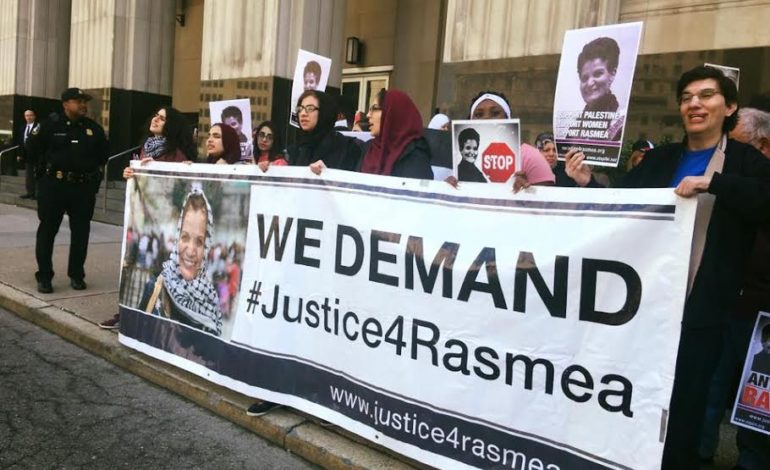 DETROIT— Hours before Rasmea Odeh entered her plea in court on Tuesday, dozens of supporters, ranging from organizers and Chicago-based defense team members, rallied outside the U.S. District Court for the Eastern District of Michigan in opposition to the parameters set around her conviction.

Odeh, a longtime activist and director of the Arab American Action Network, was found guilty in 2014 of lying on her naturalization application because she’d failed to disclose that she’d been convicted in 1969 by an Israeli military court of being involved in two bombing in Jerusalem as a member of the Popular Front for the Liberation of Palestine. She has maintained that her Israeli trial was based on a coerced confession, which has been used as leverage in American courts to indict her.

Odeh’s supporters insist that she was not given the chance to contest the allegations by explaining that she suffered from Post-Traumatic Stress Disorder as a result of the torture— including sexual assault—  she endured during her captivity in an Israeli prison.

Her case opened in 2013 after nearly 20 years as an organizer of mainly Arab American immigrant women in the United States.

Critics of the Department of Justice’s decision to indict Odeh point out that the accusations, levied in an Israeli military court and not a civilian one, do not form the basis for a fair or just trial.

Abudayyeh, in particular, questioned the reliability of a charge originating from Israel’s “kangaroo court” tribunal where, “based on their own records, 99.74 percent of Palestinians that come before it” are convicted.

They argue that by targeting Odeh, the justice system is targeting the Palestinian struggle, as opposed to issuing an indictment.

“[Chicago Mayor] Rahm Emanuel’s father was part of the terrorist militia Irgun,” said one activist, Sahar. “Yet when he was elected, Wikipedia removed his father’s page.”

Many of the activists agreed that there would be no reason to revisit the 70-year-old’s immigration status after decades of her service in the U.S., aside from the threat of a growing pro-Palestinian movement.

“She was helping all the families to settle, and she didn’t have any bad things,” added a member of the Detroit-based chapter of USPCN. “I hope their conscience will wake up and see what they are doing to the Palestinians there and here.”

In response to the evidence of torture that won Odeh an appeal in 2014, the federal government moved to designate her as a “terrorist” rather than “immigrant.”

“Even if she had been acquitted, they could still put her in denaturalization in the criminal case in Detroit,” said defense attorney Michael Deutsch in an April 3 interview with “Law and Disorder.”

Odeh’s 2:30 p.m. plea hearing drew so many people that they filled an additional courtroom. The hearing was projected on a television from Judge Gershwin Drain’s courtroom.

After reading her rights to her and questioning her about the details of her last trial, Drain asked Odeh whether she pleaded guilty or not guilty.

A paralyzing aura of tension filled the room as breaths and tears were both held back in anticipation of her answer.

“Don’t do it,” one supporter could be heard saying.

“I signed it,” Odeh reluctantly admitted, making it clear that while she had acknowledged having autographed the naturalization application, she had refused to explicitly plead guilty.

The judge nonetheless took her response as an admission of guilt.

Odeh had previously accepted a plea deal in March in which she agreed to be deported to Jordan rather than face five to seven years of jail time.

“I had no choice,” Odeh later said to the crowd, subsequently telling the AANews, “It’s like asking me with what tool would you like to be…killed with.”

Whether or not Odeh had been found innocent or guilty, her supporters argue, has little bearing on the final decision to denaturalize her.

Odeh’s deportation sentencing hearing is set for August 17 at 2 p.m.

“I don’t want to leave,” Odeh said of her arrangement. “This is my second country. But they want me to leave, because they want to destroy us and destroy our struggle.”