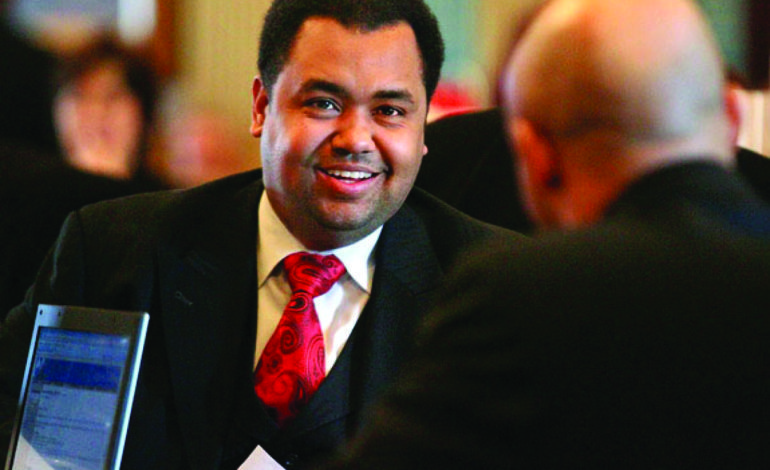 DETROIT — It’s not uncommon for the children of influential figures to dedicate their careers to ensuring their parents’ legacies are kept alive, but State Senator Coleman Young II (D-Detroit) made an audacious move in announcing his candidacy for Detroit mayor.

Young, whose term ends next year, is the son of former Detroit Mayor Coleman A. Young — the city’s first Black and longest serving mayor (1974-1994). He is challenging incumbent Mayor Mike Duggan, who took office in November 2015.

Duggan, who received 55 percent of the vote, was the first White mayor elected in the majority-Black city since Roman Gribbs left office in 1974. To many, his name is synonymous with Detroit’s resurgence.

But Young told The AANews he is launching a grassroots campaign to become mayor because Duggan’s office has instead propagated corruption and has long forgotten African Americans neighborhoods.

Young said at a time when billions of dollars are flowing into the city’s downtown area, 45 percent of the population lives in poverty, 12 percent are unemployed and neighborhoods see a murder each day.

In recent years, deteriorating conditions and teacher strikes have plagued the city’s public school system and has been at the crux of a national discussion about public education.

Young said his plan to strengthen education and curb crime involves extending both the school day and the school year.

He also said Wayne County and billionaire Dan Gilbert are in talks to build an estimated $400 million high-tech prison in or right outside downtown Detroit.

“Something is fundamentally wrong with that picture,” Young said, adding that Duggan was accused in 2015 of collusion as he set special prices for preferred contractors.

“He needs to step aside and let an honest young man get the job done for all Detroiters — by putting people to work, rebuilding roads, schools and the city’s infrastructure,” Young said.

He said he would make sure Detroit developers are able to keep employment in the city through binding agreements that hold them accountable if they do not hire Detroiters.

During Young senior’s tenure as the first Black mayor of Detroit, he was a symbol of African American success and pride across the nation. At the same time, the city’s population continued to decline.

However, Young said he is not concerned that Detroit’s challenges could tarnish his famous name and subsequently hurt his chances to be elected. He attributed the financial and population decline to the city’s shifting priorities after WWII.

Young paid tribute to his father and said he will attempt to continue his legacy. He also aspires to be like him every day.

Whether it’s the Renaissance Center, the Joe Louis Arena or the Fox Theatre, Young said the core of downtown Detroit was built or blueprinted by his father.

“His legacy lives on as the city lives on, he said. “There is not a plan or project that is being built in Detroit now that my father did not influence or plan for.”

Young senior also promoted diversity in the police department, pushed contractors to hire African Americans and other minorities, an unpopular undertaking at the time.

Mayor Young was also one of the first to advocate for the development of a public transit rail system along Woodward Avenue during the ’70s, but the project was blocked by Republican lawmakers as it proved to be too expensive, according to Jan Nelles in a 2012 Urban Affairs Review article.

“I believe there are so many opportunities…that I think we can look at his legacy, study what he’s done and try to duplicate and reinvent that to the best way possible,” Young said.

Duggan, he said, is the antithesis of Young senior’s vision.

Young said only 33 percent of Detroiters were hired for the construction of the Little Caesars Arena in Midtown Detroit.

Young, 30, has a 10-year record of public service. Before beginning his term as state senator, he served two terms in the Michigan House of Representatives, beginning in 2006.

He has also helped people keep their lights on, keep their homes and  find jobs. γ