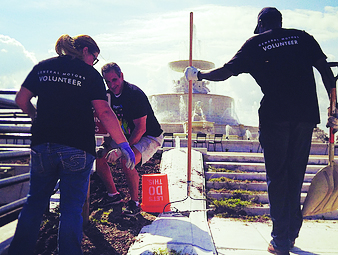 DETROIT — Turns out Metro Detroit loves the rejuvenated Belle Isle. After decades of city neglect and budget drama, the jewel of a park is shining again.

About 320,000 daffodils have been planted this spring, with a goal of having one daffodil for every one of Detroit’s residents.

And that kind of attention to detail is bringing crowds. Since the Department of Natural Resources took over operations from the city, Belle Isle Park has seen double digit increases in visits every year.

“What we hear is people feel comfortable because it’s a clean, safe environment and they appreciate it,” said Ron Olson, the state’s director of parks and recreation.

To help keep it sparkling, volunteers helped celebrate Earth Day on April 22 by sprucing up the park. The annual spring cleaning event was coordinated by the Natural Resources department and the Belle Isle Conservancy and ran on Saturday on the Detroit River island, northeast of downtown.

Belle Isle became a state park in 2014 under a 30-year lease agreement with Detroit, which had struggled for years to come up with the funds to maintain and improve the park.