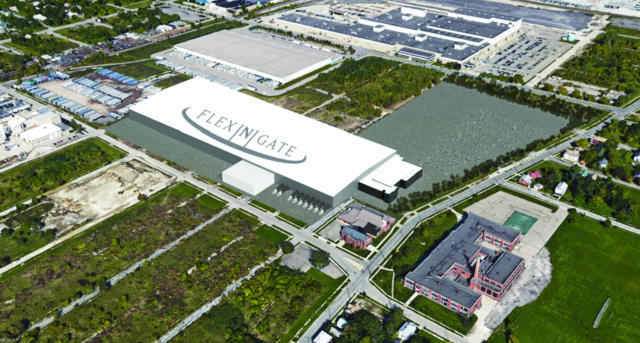 DETROIT — Auto parts maker Flex-N-Gate will build a plant in Detroit in what local officials described on Monday as the first new investment by an automotive supplier in decades in the Motor City, the cradle and former beating heart of the car industry.

“This is the largest automotive supplier investment in Detroit in more than 20 years,” Mayor Mike Duggan said at a groundbreaking ceremony under a light blue spring sky on Detroit’s northeast side. “We’re starting to compete and win again.”

Urbana, Illinois-based Flex-N-Gate will invest $95 million in the plant, which will employ 400-700 people and supply parts to Ford Motor Co. It is scheduled to open in the first quarter of 2018.

Flex-N-Gate owner Shahid Khan said Ford was the “great impetus” behind locating the plant in Detroit and that his company aims to employ locals. Workers would earn up to $27 per hour, including benefits, and the plant will use state-of-the-art automated technology “in order to pay people a living wage,” he said.

A Ford spokeswoman said the company would not provide “specific production details at this time” on which models would use the plant’s parts.

Auto plants once proliferated across Detroit, but many are now empty, red-brick husks. Only General Motors Co. and Fiat Chrysler Automobiles NV still have operational plants in the city.

Khan said the decision to invest in Detroit predated Donald Trump’s presidency. But he said that in the U.S. automotive industry today, “you have to have a social conscience. You can do that and still make investments like this.”