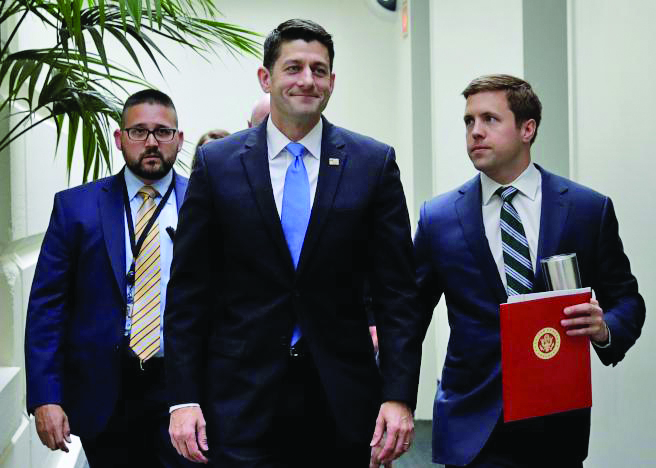 Speaker of the House Paul Ryan smiles as he departs a meeting at the U.S. Capitol before a vote to repeal Obamacare in Washington, D.C., U.S., May 4 - Photo by Reuters

WASHINGTON, D.C. — On Wednesday, the House of Representatives passed a $1.2 trillion spending bill to fund the government through September and avoid a shutdown of many federal agencies. Money would have been depleted on Saturday.

Earlier, Republicans who control the House, as well as minority Democrats, had expressed confidence that the measure would clear the House even though some conservatives were balking at the cost and some of the policies included.

For example, the measure bulks up federal funding for border security but does not pay for starting construction on a U.S.-Mexico border wall that  President Trump, a Republican, promised would be built to keep out illegal immigrants and drugs.

Trump had said that he would make Mexico pay for the wall, but the Mexican government refused, making it necessary for the new administration to ask Congress for the money.

Democrats and many Republicans have argued that a wall is an ineffective and wasteful way of securing the southern border.

Another battle over the barrier is expected when Congress tries to pass a spending bill for the fiscal year starting Oct. 1.

The bill next goes to the Senate for a vote on passage, likely at press time to take place on Thursday or Friday.

“I look forward to the House passing the bill today so that we can take it up and send it to President Trump for his signature soon,” Senate Majority Leader Mitch McConnell, a Republican, said in a floor speech.

The legislation adds $12.5 billion in spending this fiscal year for the Pentagon, with another $2.5 billion available after Trump gives details on his plans for defeating the militant group ISIS.

It ignores many of the spending cuts on domestic programs that the White House had sought and adds $2 billion for the National Institutes of Health, $295 million for Puerto Rico’s underfunded Medicaid healthcare for the poor and $407 million to fight fires in Western states.

But the legislation was late in coming. The fiscal year began last Oct. 1, and for the last seven months federal agencies have been operating mainly on simple extensions of the previous year’s funding and the priorities that came with that.

Future of American democracy: On inequality, polarization and violence

Exclusive: Q&A with Kamala Harris ahead of election