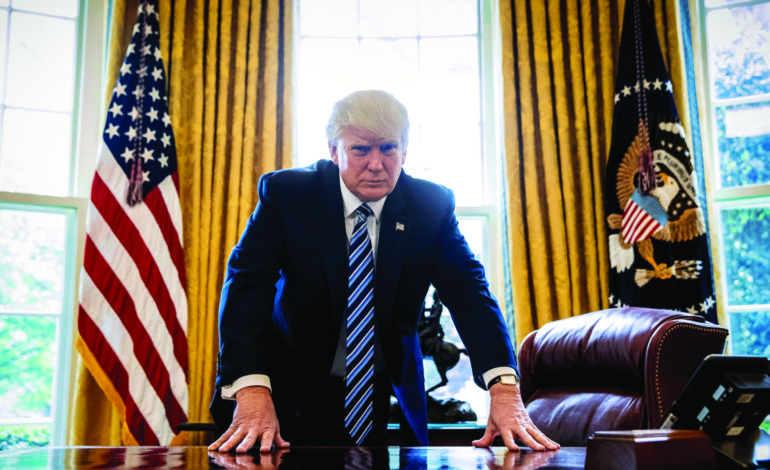 President Trump’s first 100 days were characterized by attempts to reject every act of President Obama’s in his eight years in office.

In other words, this is also known as “Whitelash”; a rejection of everything passed by the first Black president by a reactionary reputed bigot.

In fact, the entirety of Trump’s 100 days in office was marked by the illusion of action; it was little more than a corollary of the continuous attempt at undoing legislation.

Most notably, it could be summarized as the least notable of presidencies accurately embodying Trump’s all-talk, no action disposition.

The grand finale involved a hastened tearing down of a carefully crafted and drafted healthcare bill that immediately severed health care access to more than 14 million Americans. Despite Trump’s shouting victory, the slim 217-213 margin, with no Democratic support, that showed a host of resistance even from his own party, could hardly be described as such.

One Republican, Rep. Chris Collins (R-NY) admitted that he didn’t even read the bill in full.

There is no aspect of his foreign policy that is clear; his attitudes towards America’s most notorious allies and enemies remain ambiguous and unclear.

On the eve of the centennial day, Trump failed to pass a hastened bill through Congress, thrusting it through the House while it looks like it will fail in the Senate.

He disrespeted and dismissed members of his own party, despite Republicans holding their collective nose and approving his awful executive orders for the sake of party unity, by bashing House Speaker Paul Ryan and angering numerous others.

His two Muslim bans, his claims-to-fame on a campaign trail that ran on little more than vitriolic bigotry, were complete failures— one of which is pending a hearing by the Supreme Court.

His electronics ban, a sorry attempt at imposing economic sanctions against competitor Emirates Airlines, succeeded in nothing more than drastically reducing the amount of U.S. bound flights from Mid-East competitors and reducing freedom of choice for Americans.

His promises to move the Israeli embassy to Jerusalem proved banal, rendering him a disappointment full of empty promises to the nation that his son-in-law continuously bankrolls.

In fact, there is no aspect of his foreign policy that is clear; his attitudes towards America’s most notorious allies and enemies remain ambiguous and unclear.

For the first time, America can say it really does not know what its foreign policy really entails.

Trump probably cannot even say what his position is on Saudi Arabia or Israel; two tied and true American allies that recently received their first foreign visits by the president.

One second he is reiterating his unwavering commitment to Saudi Arabia, and the next minute he contentiously questions their loyalty.

One minute Trump gets Israeli Prime Minister Benjamin Netanyahu giddy with promises to pick up where Obama refused to step up; and the next he lets down the Jewish state by suggesting it ease up on settlements.

In one instance, Trump will prop up rhetorical brinksmanship with North Korea to the extent where he sends an armada ashore— albeit in the wrong direction, much like his general trajectory of presidential decision-making; yet the next he is praising Kim Jong Un as a “smart cookie.”

When he wasn’t praising the dictator, Trump continued on in lowering the standards of the presidency through childish statements. He has also issued the most executive orders out of any president, including Obama or George W. Bush.

Just as Trump conned the coal miners in Appalachia with empty promises before revoking their work programs and health care, not one executive order has done anything to benefit the American people. γ