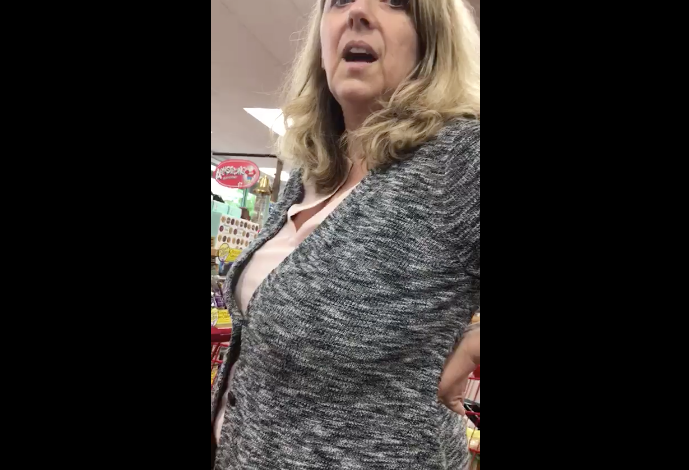 WASHINGTON ― A video of a woman appearing to tell off a Muslim shopper went viral, in which the woman told her, “I wish they didn’t let you in the country.”

The encounter allegedly took place at a Trader Joe’s in northern Virginia over the weekend, according to a South Carolina-based comedian who posted the video and claimed the Muslim woman is his friend.

Comedian Jeremy McLellan posted the video on Facebook and writes that the video was shot Saturday at the Trader Joe’s in Reston, and that he has confirmed it is real.

The entire encounter between the two women is not shown in the video, but McLellan’s post details his friend’s account of what happened in the line:

McLellan writes that his friend, who is a Muslim woman, offered to let the woman seen in the video go in front of her in line because she was in a hurry. At that point, the woman “started talking bad” about another Muslim woman in the store, who was wearing a niqab, McLellan writes.

The comedian’s post says the woman then asked his Muslim friend why she didn’t cover as well, and his friend replied that it was a choice.

“The woman didn’t believe her and started talking about FGM (female genital mutilation) and telling her “I wish they didn’t let you in the country.”

That’s when his friend started filming.

The unidentified shopper, seen wearing black loafers and jeans, says, “So you play dumb, and then you say everybody’s— okay. I got it.”

There’s a pause, and then the woman identified as McLellan’s friend, behind the camera, says, “I shouldn’t have let you in front of me.”

“I wish they didn’t let you in the country,” the unidentified woman counters.