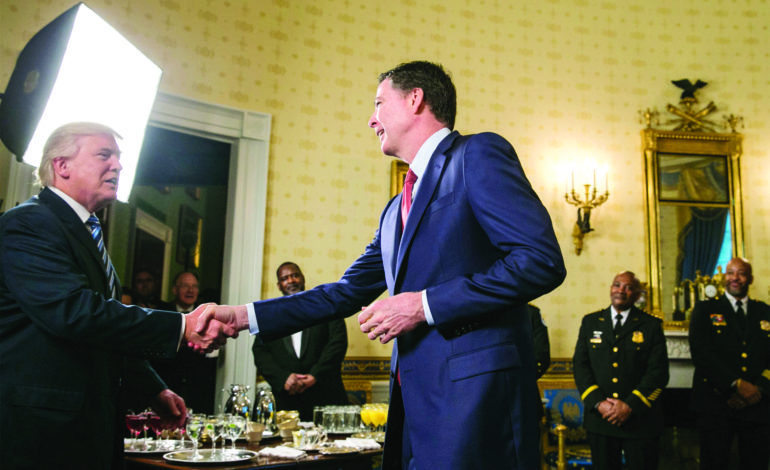 In another display of power overreach, Trump played Nixon when he fired FBI director James Comey.

Or perhaps he thought he was still on the Apprentice, with “You’re fired” as his only misguided attempt at wielding power.

Here, in firing Comey, the ends do not justify the means; the Americans are paying attention to the cause of Comey’s firing, not merely that he was.

They also should be paying attention to Trump’s fickle reasons for firing Comey, having changed from citing his investigation into Clinton’s e-mail fiasco to allegedly being “a showboat” and “a grandstander… to in part because he had lost the support of rank-and-file F.B.I. employees”

However, Andrew G. McCabe, the new acting director of the agency, told the Senate that Mr. Comey enjoyed “broad support within the F.B.I. and still does to this day.”

Despite Trump receiving near-praise and fanfare for striking Syria a few weeks ago, not even the American media had his back in his latest misstep, returning as usual to critiquing his latest act of inanity.

The American people did not have one day to validate their assessment of why Comey was fired; they had 110.

Comey was not fired soon after talking about Clinton’s infamous emails, he was fired nearly four months after the inauguration of President Trump.

Had Comey been fired in January, Trump’s pathetic alibis would have relegated at least a reconciliatory overlook as a fair option.

Yet Trump had fired Comey in the months after intensified investigation launched into Russian meddling in the 2016 presidential
election.

And, after impassioned and near-delusional denials of any involvement, the situational evidence against Trump cannot be more incriminating.

He had fired Comey just months after his intentions to heighten investigation were credible and had begun to assemble the manpower and resources to carry on a task demanded by the American people for so long.

The one time, and perhaps the most visible instance, where an official in the Trump’s administration displays an appropriate and professional use of his power inevitably runs counter to Trump’s whims.

Nor can anyone deny the role that Attorney General Jeff Sessions, a partner in crime, who has recused himself from this investigation because of contacts with the Russian Ambassador to the U.S., had in either administering or in encouraging the decision to fire the FBI director.

Reports by various sources confirmed that Sessions was told to find reasons to fire Comey, as if his mobilizing of an investigative committee that was soon to incriminate Trump’s campaign was not enough.

Where the paralleling incidents fail to intersect is where Attorney General Elliot Richardson, unlike Sessions, maintained his integrity by refusing to fire Cox.

In this week’s debacle, Trump continued to set terrible Presidential precedents that, in avoiding an incriminating investigation, resulted in widespread and warranted public and media outrage in response to a clear misuse and abuse of power.

Trump is no longer able to maintain the contrasting duality of an American that has no respect for law and order or civil values.

The only question, for a president who marked 100 days of impunity and abused power, is if it’s his presidency or this country that is closer to perilous doom.