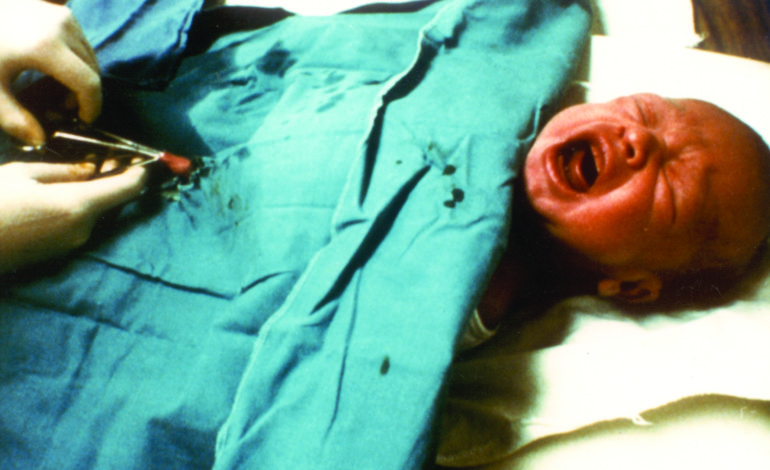 There was a festive spirit in a Syrian neighborhood, decades before children were acquainted with desolation — a young boy was growing fretful as the moment for a special occasion approached.

An entire neighborhood, where mere residence equaled family, knew why Mohamad, 12, along with a few of his brothers and cousins, were going to feel different today. Most of them were invited to the party.

Wherever the “mutahir” or purifier goes, women sing the tunes of joy through a traditional “zalghouta” proclaiming a boy’s transcendence into manhood.

Unlike most men, Mohamad, a Hamtramck immigrant, now 40, who wished to be identified with an alias, can recall with vivid memory every heartbeat that lead up to his circumcision.

Mohamad said that at the time he and his pubescent kin had no idea why they hadn’t been circumcised as infants, but they understood it was a big deal and that it had to be done.

He sat bare on the floor unafraid, he insisted; the support from his entire family who stood behind him and those who firmly gripped his arms and legs might have helped bear the pain of a procedure done without anesthetic.

It was quick, but the procedure was a “life changing experience,” Mohamad said. “It helped me understand my identity.” He added that he still needed some time to recover.

More than 80 percent of American males aged 14 to 59-years-old said they’d been circumcised, according to the Centers for Disease Control and Prevention. However, few of them have experienced Mohamad’s insight, as the majority undergo the surgery within a few hours or a month after birth.

Nonetheless, not every male is circumcised and many vehemently criticize the ritual.

The long-brewed debate around the practice’s health and moral ramifications has reemerged, in the wake of two Detroit physicians facing federal charges for allegedly performing Female Genital Mutilation (FGM), a surgery physically reconstructing the genitalia of 6 and 7-year-old girls from Minnesota.

One physician and his wife held the hands of girls screaming in pain, court documents showed.

The girls’ respective grandparents have been given custody as the parents await sentencing. FGM was outlawed in a 1996 federal law that also imposed a five-year prison sentence. In 2013, the Transport for Female Genital Mutilation Act amended this law to outlaw “vacation cutting”, the practice of taking a girl overseas for the procedure.

Legislation in the Michigan House and Senate has since been introduced, bumping the procedure to a felony in the state punishable by up to 15 years in prison.

“Female genital mutilation constitutes a particularly brutal form of violence against women and girls,” Daniel Lemisch, the acting U.S. Attorney for the Eastern District of Michigan, said in a statement. “The practice has no place in modern society and those who perform FGM on minors will be held accountable under federal law.”

While FGM is considered abhorrent across most societies, the ritual is widely practiced by some religious groups, including an insular sect of Shi’a Muslims in West India: the Dawoodi Bohras.

The deeply-rooted cultural practice continues in secret after members immigrate to countries around the world.

An exploratory online survey conducted by Sahiyo, an advocacy organization working against FGM, reported that 80 percent of Bohra women have undergone FGM or “khatna.” About half of them said the reason was religious or traditional, 45 percent said it was done to decrease sexual arousal and the rest cited hygiene and cleanliness.

Similarly, male circumcision is one of the oldest and most common surgical procedures— as an estimated 30 percent of males are circumcised worldwide— and is performed for many religious, cultural and medical reasons, according to a comprehensive 2007 report by the World Health Organization (WHO) and United Nations Program on HIV/AIDS. Two-thirds of the world’s circumcised males are Muslims.

The controversy surrounding circumcision includes justification of the procedure’s health benefits in males and females, in contrast with the ethical arguments regarding consent and human rights, and against unnecessarily dismembering portions of an individual’s genitals for non-medical reasons.

Male circumcision has its roots in ancient Egyptian and Jewish practices and can be traced in depictions in Egyptian tombs from 2300 B.C.E.

Religious, cultural and social factors have led the push for the procedure. For example, Muslims are required to be circumcised to perform the pilgrimage to Mecca, tribes in Ghana have traditionally not elected uncircumcised chiefs and parents have long chosen to ensure their sons fit in, according to the WHO study.

In most cultures, circumcision earns passage to manhood, although it may have been a test of bravery and endurance.

Today, most circumcisions are performed shortly after birth in a hospital or clinic, using local anesthetics and sterilized tools.

The procedure involves removal of the foreskin of the penis, extra skin extending from the shaft that covers the glans, by pulling that skin in front of the glans and cutting it. The skin is held in place and bandaged without stitching.

However, there are risks involved. Adolescent or adult circumcision can especially be associated with excessive bleeding and infection. Serious conditions can occur if circumcision is undertaken by inexperienced practitioners, with inadequate instruments or with poor after-care.

It is also argued that sexual pleasure may diminish due to the removal of the nerve endings in the foreskin and subsequent thickening of the outer tissue of the glans.

Mohamad, the Syrian immigrant, said he recalled seeing a surprising amount of blood after the ritual, but not feeling pain until soon after.

Chadi Haddad, an OBGYN chairman at a Dearborn Heights hospital, said he performs circumcisions almost every time he oversees a baby’s delivery.

He said the circumcision is usually a simple procedure often done one day after birth, or eight days, per Jewish practice. He also said parents are asked if they want the surgery done and are required to sign a consent form.

He added the surgery is more painful and leads to a longer recovery time if done at an older age.

Haddad said circumcision has hygienic benefits and that the lack of a foreskin makes it easier to wash the penis and eliminates the ideal moist environment needed for of infections and bacteria to grow.

However, a movement against circumcision spearheaded by human rights, religious and secular organizations has intensified the long-running debate in recent years.

The WHO report shows that about 90 percent of fathers who are circumcised chose the procedure for their sons, mainly so they do not look different than their peers.

Among other reasons, those who oppose circumcision contend that a newborn or infant cannot consent to a surgery with life-long impact, and therefore a decision to undergo the surgery should be left to a fully developed adult.

They also argue that since the practice originated from religious and traditional motivations, the intention to circumcise had never been for better health or hygiene — cosmetics has always and often continues to dominate the basis for the procedure.

Another reason for the surgery includes the perception by both men and women that circumcised men have improved sexual pleasure — a falsehood, according to a 2013 report in The Journal of Sexual Medicine.

The American Academy of Pediatrics reaffirmed its stance on circumcision in May 2005, stating that there are insufficient data to recommend routine circumcision. In 2012, the German Pediatric Organization (GPO) and Dutch Medical Association strongly criticized performing circumcision on babies and infants.

The GPO said that during a boy’s pre-pubescent age, there is only very rarely a real medical indication for removing the foreskin and that the argument of preventative use is mainly based on data that was collected in Sub-Saharan Africa and has been strongly doubted.

Aside from the adverse psychological effects, physicians also point out that the foreskin is a vital part of the male anatomy.

“The male foreskin is a part of the skin of the organ and fulfils important functions that protect the very sensitive glans,” the GPO wrote in a statement. “It normally covers the glans and protects it from harmful substances, friction, drying out and injuries. It has apocrine sweat glands…which has an antibacterial and antiviral function. The natural oils lubricate, moisten and protect the mucous membrane covering of the glans and the inner foreskin.”

Physicians also point out that the foreskin contains more than 20,000 nerve endings, and that cutting parts of the anatomy to inhibit infection and disease is not the answer. Women do not cut their breasts to prevent cancer from forming, for example.

It is also important to note that about 100 babies die every year due to complications from circumcision.

The arguments against male circumcision are comparable to Female Genital Mutilation. Opponents say mutilation of the female genitals, which include either removal of the clitoral hood, complete removal of the clitoris or stitching shut of the labia, are supposedly done for the same “hygienic” reasons.

There are no known health benefits associated with FGM. Bodies such as the WHO, the United Nations Children’s Fund (UNICEF), the United Nations Population Fund (UNFPA), the International Council of Nurses, the American Academy of Pediatrics and the Royal College of Obstetricians and Gynecologists consider FGM to be universally unacceptable, as it is an “infringement on the physical and psychosexual integrity of women and girls and is a form of violence against them.”

This raises the question whether the same arguments hold true for male circumcision.