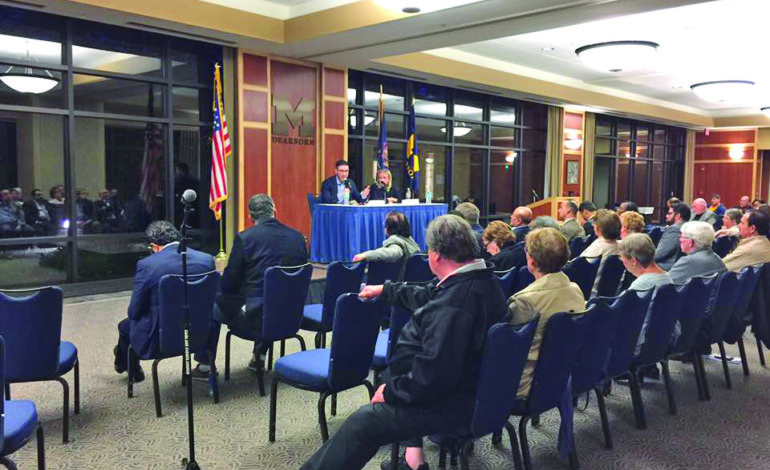 The event took place in the Michigan Room at the University of Michigan-Dearborn and included community leaders, students, concerned residents and activists, each invested in addressing problems of substance abuse and sharing concerns about health care and access.

The SAFE Coalition and the Detroit Department of Transportation co-hosted the event with the provision of resources and information regarding issues around infrastructural funding and support for municipal services.

The panel, intended to focus on the various issues, ended up largely discussing the impact of substance abuse in the community.

“In every town hall [you] can’t anticipate what there’s going to be,” said Dingell, noting that the “surprising” gravitation of the community forum towards mental health and substance abuse “shows you what a significant issue drug addiction is.”

In response to the inquiries and personal stories, which Dingell connected to her own personal experiences with a sister who battled drug addiction, she commended the community for having “discussed more about drug addiction than in any town hall.”

“We have to not demonize those with legitimate drug issues,” she said, adding that it was important to administer “legitimate uses” of certain drugs for medical purposes while focusing on the “opioid drug crisis in our communities.”

Recognizing that Dearborn is not immune or exempt from the heroin and opioid crisis that has plagued the U.S., notably the rust-belt Midwest, numerous Dearborn residents and community activists
called for approaches that are dialectic and rehabilitative rather than punitive and stigmatizing.

Hassan Abdullah, executive director of the newly formed SAFE Coalition, reiterated that addiction “is a disease and it’s important it be treated like one; both socially, medically and emotionally. Those are three important factors to address this issue.”

He reminded the audience that “there are people doing the work to help control this issue”, the problems of which he identified as exasperated from social pressures the community places on mental health issues and stigmas, taboos around illness and a lack of public spaces or forums for those affected to find solace in confiding in.

Likewise, Fairouz Bazzi, a nurse running for Dearborn City Council, reiterated that addiction “is a disease.” She urged audience members to seek help for their affected loved ones.

“There is a good amount of shame in being an addict,” she said, shifting the conversation from youth to focusing on the battles with addiction faced by older groups. “It’s not just for the young kids. We have 60, 70, 80-year-old people
who have opioid addictions, who are depressed, who are seeking help and are forgotten.”

The officers also have been taught to make use of naloxone, an antidote that reverses the effects of an opioid overdose.

A critical part of shifting the conversation to rehabilitation involves restructuring many overly punitive aspects of the criminal justice system, which further punish and harm, rather than help, addicted individuals.

“When people get to the court system, if they see a drug offense, they give them the mandatory sentencing,” Abdullah said. “Circumstantial evidence is not considered. Funding to mental health facilities has been stagnant for decades, but recently has seen a decrease. We
underfund and underpay behavioral health clinics and specialists.”

In response, Hammoud has requested a bill in the State House to reimburse health care professionals for the work being done.

Following the House of Representative’s recent passing of provisions aimed at knocking over pillars of the Obama-era Affordable Care Act, numerous residents came forward to share their concerns and dissatisfactions with existing health care provision.

“From the state level, the ACA wasn’t the answer,” Hammoud said. “It tackled the uninsured, but we do still have a big portion of underinsured.”

“We underfund and underpay behavioral health clinics and specialists,” he added.

Dingell admitted that the obscurities of recent healthcare legislation means that local legislators “don’t know what’s going to be in the final [healthcare] bill.”

Yet much of what she did know sufficed to warrant concern from consumers and providers. “What they’ve done in the bill to pass the house is to take it from a subsidy to a tax credit. A lot of people don’t have the money, so it could really hurt people.”

More than 50 percent of children in Michigan have health insurance paid for by Medicaid, a program that threatens to be jeopardized with the prospect of Trump-administration block grants. “Those that need [health insurance] the most will not be able to afford it.”

Jennifer, the mother of a severely disabled 17-year-old, said she was not able to find the appropriate level of care and assistance for her special needs child at local public schools—bridging similar problems with public education as well as health care.

“Separate schools for kids with disabilities is against the law, if you do not go about it the right way,” she said.

In light of the voting down of the Regional Transit Authority’s proposal to institute new public transit lines around Southeast Michigan, Hammoud advocated future campaigning for a similar proposal that would tackle environmental issues, high car insurance costs and congestion problems that result from Michigan’s car culture.

While Wayne County voted in favor of the proposal, Macomb and Oakland county voted against it.

“The DDOT should not route its own buses,” one Dearborn resident said at the town hall, speaking out against the inconvenience of “buses [that] are going through schools/residential areas.”

“Infrastructure is one of the issues we should be able to agree on,” Dingell told The AANews. In response to some of the concerns about Flint and Detroit’s water mismanagement, she acknowledged that “Water needs to be part of the infrastructure discussion.”

At the state level, Dingell and other Democratic legislators in Michigan await the president’s decision as they anticipate a decision for their own prospective infrastructure bill.

“We need to reach bipartisan agreement,” she said.

He said legislation has been introduced that “mandates annual testing of children for any lead poisoning…and legislation that requires testing of all water in healthcare [institutions]…and water lead testing at all schools.” γ