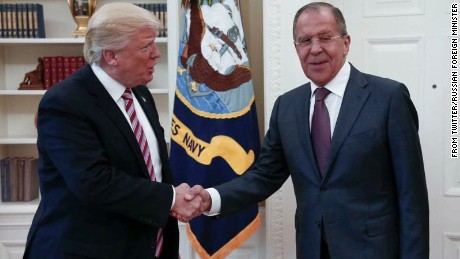 WASHINGTON, D.C.-Facing heavy criticism over his handling of highly classified information, U.S. President Donald Trump defended having shared “facts” with senior Russian officials, saying on Tuesday he had an “absolute right” to do so and had been trying to get Moscow to be more active in combating Islamic State militants.

Trump’s acknowledgement that he had given sensitive information during a White House meeting last week undercut intense efforts by senior aides to play down the incident.

The president took to Twitter on Tuesday to defend his actions against intense criticism, including from some of his fellow Republicans, after news reports emerged on Monday of Trump’s conversations about a planned Islamic State operation.

The disclosures roiled the administration as it struggled to move past the backlash over Trump’s abrupt firing on May 9 of FBI Director James Comey, who was investigating potential ties between Russia and Trump’s 2016 presidential campaign.

The U.S. dollar fell on Tuesday in part due to concerns that Trump’s presidency will become caught up in controversies and he will fail to deliver on promises to overhaul the U.S. tax and healthcare systems.

“As President I wanted to share with Russia (at an openly scheduled W.H. meeting) which I have the absolute right to do, facts pertaining to terrorism and airline flight safety,” Trump tweeted. “Humanitarian reasons, plus I want Russia to greatly step up their fight against ISIS & terrorism.” Islamic State, or ISIS, is a common foe of Moscow and Washington.

A U.S. president has the authority to disclose even the most highly classified information at will, but U.S. and allied officials told Reuters that Trump had endangered cooperation from an ally that has some intelligence on Islamic State.

National Security Adviser H.R. McMaster said Trump did not know the source of the information he revealed to Kislyak and Lavrov, the public face of Russian foreign policies that are often at odds with U.S. aims.

“The president wasn’t even aware of where this information came from. He wasn’t briefed on the source and method of the information either,” McMaster told reporters on Tuesday. “What the president shared was wholly appropriate,” he said.