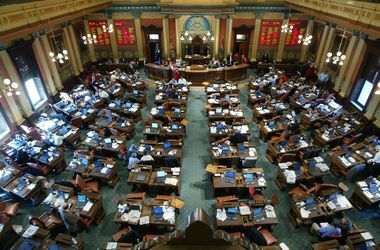 LANSING-The Michigan Senate approved legislation on Wednesday making genital mutilation of girls a state felony punishable by up to 15 years in prison, both for doctors who perform the procedure and parents who transport a child to undergo the surgery.

The legislation, which now goes to the state House of Representatives, was spurred by the case of an emergency room physician charged last month under federal law with performing genital mutilation on two 7-year-old girls at a suburban Detroit medical clinic.

Another doctor and his wife who ran the clinic also have been charged in that case, believed to mark the first U.S. criminal prosecution of its kind. The three defendants could face prison terms of up to five years if convicted.

Genital mutilation of girls, typically involving removal of all or part of the clitoris, is banned by several international treaties but remains a common cultural or religious practice in some African countries, including Somalia, Sudan and Egypt.

State Senate Judiciary Committee Chairman Rick Jones, a sponsor of the legislation, cited recent expert testimony before his panel describing Michigan as a “hotspot” for genital mutilation due to its large community of immigrants from countries where such surgery is still routinely performed.

“It’s been hidden. But now that we’re aware, we want to make a very strong statement to the world – never again in Michigan,” he said.

Aside from carrying tougher penalties than federal statute, Michigan’s legislation would allow arrests and prosecution by local law enforcement.

It also would close a federal loophole by outlawing transportation of girls under age 18 within state boundaries for purposes of undergoing genital surgery, Jones said. Parents or guardians who bring children to Michigan from abroad or are found to have taken them overseas for such procedures could likewise be charged.

The federal law, enacted in 1996, targets practitioners of female genital mutilation as well as individuals who carry a child across state lines to undergo the procedure.

The package of four Republican-sponsored Michigan bills cleared the state Senate unanimously, and Jones said he expects swift House passage and enactment by the governor in a matter of weeks.

Jones said female genital mutilation bans have been passed or were under consideration in several other states, including Minnesota and Texas, but he believed Michigan’s would be the toughest.

The World Health Organization has estimated that more than 200 million girls and women alive today have undergone genital mutilation, which can cause lasting health problems.