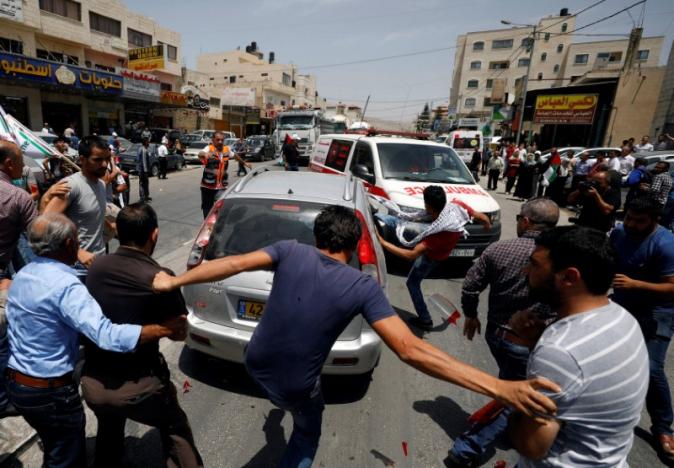 Palestinians attack a passing vehicle belonging to an Israeli settler near the Hawara checkpoint, near the West Bank city of Nablus/Reuters

WEST BANK ― A Palestinian man was killed in the occupied West Bank on Thursday when an Israeli settler opened fire as protesters crowded around his car and pelted it with rocks, according to multiple accounts.

A Reuters photographer and other witnesses said hundreds of Palestinians had gathered near the city of Nablus to show support for Palestinian prisoners on hunger strike in Israeli jails. During their demonstration, they blocked a main road used by both Palestinians and Israeli settlers.

The Israeli military said the Palestinians began throwing rocks at passing vehicles, including one belonging to a settler.

Video footage showed a gray four-door car being forced to a halt in the middle of the road, next to an ambulance, and being bombarded with rocks. The driver can be seen inside, drawing a handgun and firing at least three shots toward the sides of the road, although the target is not clear.

Yossi Dagan, head of the settlers’ Samaria regional council, said he had spoken with the settler, who told him he had been in fear of his life when he fired. “He pulled his gun out to defend himself, in order to stop them from lynching him. He fired.”

Majdi Mohammed, a Palestinian photographer for the Associated Press who was wounded by the gunshots, described what he saw.

“When the army arrived, he (the settler) started shooting. I had my back turned to him. I put my hand on my head. The one next to me was hit by a bullet in his head, and people said he was killed,” he told reporters.

An Israeli army spokeswoman said soldiers had arrived to disperse the demonstration. She said the settler in the car had acknowledged firing his gun, and confirmed that one man had been killed and one injured.

The army said it was investigating the incident. The Palestinian Health Ministry said the dead man was a 23-year-old Palestinian.

There have been several clashes in recent days between settlers and Palestinians.

Nickolay Mladenov, the United Nations special coordinator for the Middle East, said that “this deplorable incident must be promptly and thoroughly investigated and all suspected of being involved must be prosecuted”.

At least 245 Palestinians and one Jordanian citizen have been killed since a wave of sporadic violence began in 2015 in Israel and the Palestinian territories.

Israel says the Palestinian leadership is inciting the violence. The Palestinian Authority, which exercises limited self-rule in the West Bank, denies incitement and says that, in many cases, Israel has used excessive force in thwarting attackers armed with rudimentary weapons.