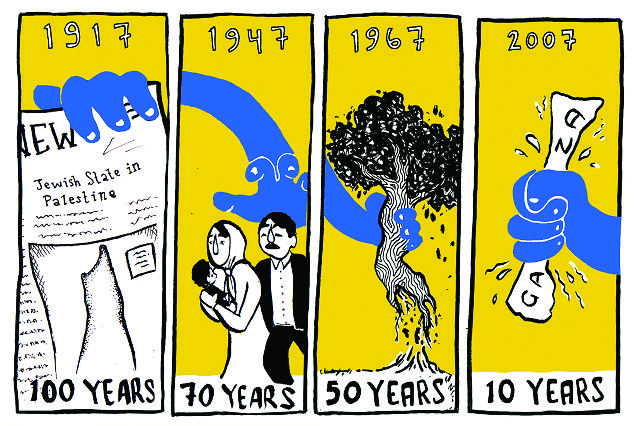 May 15 marked the 69th year of systematic expulsion and pillaging of Palestinian communities, in addition to the centennial of the Balfour declaration that began the travesty.

In May of 1948 alone, after the Israeli militiamen of the Haganah, Irgun and Palmach liquidated entire villages via massacres, forcing the spared from their villages and preventing them from right of return to their stolen homelands, more than 700,000 were displaced, 531 villages destroyed and dozens of massacres took place in an ethnic cleansing campaign that was not an isolated incident limited to the Nakba, but rather a catastrophic catalyst for seven ensuing decades of injustice.

Despite Palestinians’ refugee status, which applies to two-thirds of them worldwide, they continue to be denied the most basic right of return as guaranteed by the U.N. Charter.

Refugees, alternatively entitled to compensation, no longer even receive their dues, as cash assistance to Palestinians ran out in 2015.

The Palestinians are continuously denied their birthright, denied even from claiming the most inalienable aspects of their personhood.

Even in the countries to which they’re exiled, such as Lebanon, Iraq or Jordan, Palestinians have remained second class citizens for decades. Residing in overcrowded camps, refugees are not able to gain citizenship of hosting countries, barred from owning property, the right to vote or even to hold significant jobs.

The Palestinians— too often permanently displaced— who have remained in their lands are far from the exemption of exploitation and oppression. Conditions within their homeland are far worse today than they had been at the time of the Nakba.

Gaza today is the largest open-air prison with conditions unthinkable to even the most deplorable of state-run penitentiaries.

Gaza is isolated off from any food, supplies or materials that may give them an ounce of dignity or chance at a semi decent life.

Gaza has endured numerous assaults and bombardments and is on the brink of collapse at every given moment, as Israel continues to siphon it of any semblance of economic stability.

Tens of thousands sleep on the floor of U.N.-run schools. The area is without electricity and faces an extreme shortage of clean water.

Gazans, in terrible health from these conditions, are isolated from access to hospitals or basic medical care.

Even in the countries to which they’re exiled, such as Lebanon, Iraq or Jordan, Palestinians have remained second class citizens for decades. Residing in overcrowded camps, refugees are not able to gain citizenship of hosting countries, barred from owning property, the right to vote or even to hold significant jobs.

The West Bank isn’t any better; in fact, it is afflicted with worse poverty than in Gaza. It remains in the same critical condition, likewise suffering from the rapid deterioration of the settlements. More than eight in 10 communities in the West Bank lack food, while segmentation and displacement prevent Palestinians from restructuring and rebuilding their schools, roads and water systems— all of which are in terrible condition and further jeopardized by settlements expansion.

All the while, Arab governments’ priorities remain with their donors and the Arab people remain hopelessly divided, pitted against each other with conflicting sectarian allegiances preventing them from standing together on Palestine, rendering them ineffective.

The Gulf’s depravity showed itself again recently when in exchange for a unspecified “peace deal”, they would promise to normalize “relations” with Israel, business as usual.

It was another artillery exchange of empty rhetoric for maintenance of economic power between equals in oppression.

Even here in Dearborn, numerous calls to stand with the Palestinian prisoners and support Palestine in commemoration of its Nakba exemplified our unfortunate apathy. Our own community could not even muster up the manpower and physical support to commemorate the suffering of the Palestinians.

Yet the Arab communities— local, national and international— must stand with Palestine and with the Palestinian people as a nation facing not a national crisis, but systematic humanitarian oppression.

Just as the hunger strikers in Israeli prisons, famished and deteriorating, enter their first month of steadfast striking, the Arab community must also stand and resist the oppression of a nation that is, too, wasting away at the yoke of oppression.

It is a shame that Arabs have done otherwise.