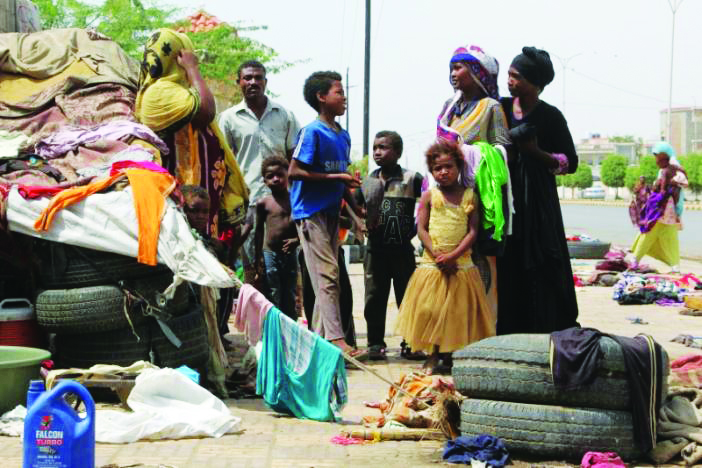 People displaced by the war in northwestern Yemen next to their makeshift hut on the street in the Red Sea port city of Hodeidah, Yemen

The escalating outbreak of disease and displacement of tens of thousands by recent fighting has inflamed one of the world’s worst humanitarian crises, pushing Yemen’s war-pummeled society ever nearer to collapse.

Cholera — a diarrheal disease spread by food or water tainted with human feces — has killed 180 people in less than three weeks, according to the Geneva-based International Committee of the Red Cross (ICRC).

Samira Ali, a teacher and worried mother, expressed shock at the scene at Sabaeen Hospital in Sanaa, the ancient capital in the north held by the armed Houthi movement since late 2015.

“My young son suddenly started suffering from severe diarrhea,” she told Reuters. “We went to the hospital and found it full, we couldn’t find a place. Only with difficulty were the doctors able to give him the medicines which saved his life. This situation is tragic.”

The United Nations now estimates that in Yemen a child under the age of 5 dies every 10 minutes from preventable causes, 2 million people have fled fighting near their homes and only half of the hospitals have staff and supplies to function normally.

Health system hanging by a thread

More than ever before in the war, state institutions are losing their ability to withstand the spread of pestilence and the mounting death toll.

A battle for control of the central bank has left salaries in Houthi-held lands in and around Sanaa largely unpaid for six months, ruining the lives of hospital and sanitation workers.

Pumps to sanitize the water supply sit idle for lack of fuel, while maintenance agencies tasked with chlorinating aquifers go without salaries and supplies.

“The health system has been hanging by a thread,” UNICEF’s spokesman in Yemen, Rajat Madhok, said.

“Wages haven’t come in,” Madhok told Reuters. “Humanitarian workers and doctors are trying their best, but some leave their work to seek jobs where they can get paid. Declining value of the currency hurts and all this has a cascading effect that is badly hurting the sector.”

A streak of misery runs the length of Yemen’s western Red Sea coast — from fighting in the north along the border with Saudi Arabia to a new coalition-backed offensive working its way up to the main port of Hodeidah from the south.

The campaign has forced around 50,000 to flee for safety from the area this year, according to the United Nations, many of whom had already escaped homes affected by fighting there.

Clutching her young son on Hodeidah’s streets, 19-year-old Saleha Ahmed Ali recounted her weary trek down the coast from the northwest.

“We’re from Haradh, but because of the war we fled to Bajel to be safe there,” she said. “But when the air strikes got worse in Bajel, we fled to Hodeidah.

“There’s no food or milk for our children,” she added. “We can’t even find a mat to sleep on or a bucket to wash our children. They haven’t given us tents and it rained yesterday. We don’t know where to hide. We’ve lost our homes. This war has dragged us from place to place.”

Speaking to Reuters by phone from Sanaa, Shabia Mantoo of the U.N. refugee agency UNHCR wondered why the scale of the suffering had not spurred more peacemaking efforts.

“It was already catastrophic, how much worse can it get?” Mantoo asked. “Nineteen million people are going through real suffering. Yemen now is an inventory of misery. What more will it take to get the world’s attention?”

In the U.S., Yemeni Americans in Dearborn and Hamtramck, where a large percentage reside, are no strangers to the struggles of relatives in their homeland.

Wali Altahif, a Yemeni American activist, told The AANews the contamination is not isolated, but impacts almost every city and town throughout the country.

He said his family— like almost every Yemeni family in town— has relatives in Sanaa, who report that the majority of families are equally afflicted.

“It’s not like one family is doing better than others,” he said.

Altahif added reliable reports regarding poisoning point to consequences of chemicals from bombs dropped across the country. He called for an independent body in Yemen to investigate the allegation.

Moreover, the activist said there is a total embargo on Yemeni airports, which have either been damaged or shut down by Saudi collation forces.

The “exiled government” has also moved Yemen’s central bank from Sanaa to Aden, an area controlled by the Saudi-backed forces.

As a result, more than 2 million Yemenis have not received their salary in nearly a year, Altahif said. Those 2 million employees often have to look after an average about 9 million others, including family members.

“You’re seeing starvation and disease,” he said. “The health system is in total collapse, there is a shortage of medicine, fuel, and no electricity for the last three years.”

Businesses, hospitals and residential buildings get their electricity from solar energy, because the main electric plants were bombed, he said.

Travel between cities is unsafe and Al-Qaeda controls parts of Southern Yemen.

Altahif continued to describe his family’s conditions as “miserable.”

Most Yemeni Americans’ relatives still in Yemen await responses to applications to travel to the U.S. submitted five to seven years ago.

Because the U.S. embassy in the country is closed, family members have to travel to outside Yemen, to Jabuti, Algeria or Tunisia to get to an embassy, Altahif said.

He said his nephew, a legal U.S. citizen, is in Yemen now.  He had to travel for 28 hours by sea on a fishing boat with his wife from Aden to Jabuti, in order to get to a U.S. embassy for an interview with his wife.

“These are situations we hear from every Yemeni Americans,” Altahif said. “Pretty much every family in the community will tell you the same thing.”