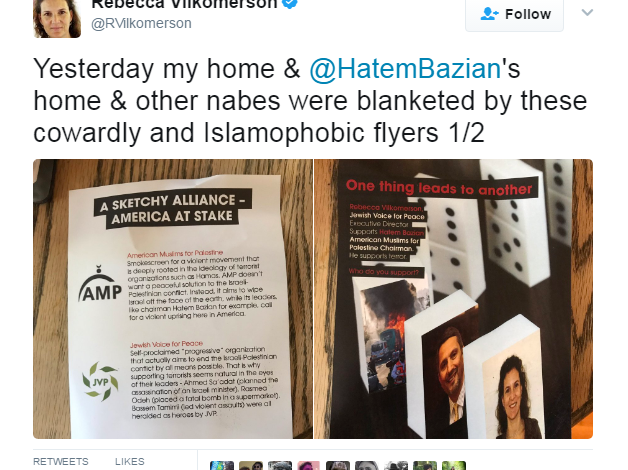 Berkeley, CA-University of California lecturer Hatem Bazian noticed a flyer placed on his winsheild when he went to drop off his daughter at school the morning of May 10.

He was appalled to confront an image of himself on a flyer that claimed he “supports terror.”

Pictured alongside Rebecca Vilkomerson, executive director of Jewish Voice for Peace, a national organization that mobilizes for Palestinian rights. Bazian himself is the chair of American Muslims for Palestine.

The back of flyer calls the organization, Americans for Muslims for Palestine a “smokescreen for a violent movement” and claims that Bazian made calls for a “violent uprising here in America.”

The flyer also accuses Jewish Voice for Peace of “supporting terrorists” and claims that American Muslims for Palestine’s ideology is “deeply rooted in terrorist organizations like Hamas.”