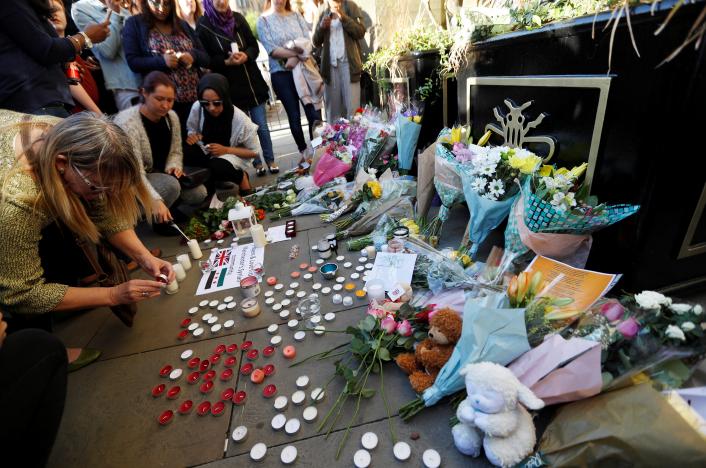 Courtesy of REUTERS
MANCHESTER- British police on Tuesday identified the suicide bomber who killed 22 people, including children, in an attack on a crowded concert hall in Manchester, and said they were trying to establish whether he had acted alone or with help from others.

The man suspected of carrying out Britain’s deadliest bombing in nearly 12 years was named as Salman Abedi, aged 22, but police declined to give further details about him.

U.S. security sources, citing British intelligence officials, said he was born in Manchester in 1994 to parents of Libyan origin. He is believed to have traveled by train from London before the attack, they said.

“Our priority, along with the police counter-terrorism network and our security partners, is to continue to establish whether he was acting alone or working as part of a wider network,” Manchester Police Chief Constable Ian Hopkins said.

The attacker set off his improvised bomb as crowds streamed out of the Manchester Arena after a pop concert by Ariana Grande, a U.S. singer who is especially popular with teenage girls.

“All acts of terrorism are cowardly,” Prime Minister Theresa May said outside her Downing Street office after a meeting with security and intelligence chiefs.

“But this attack stands out for its appalling sickening cowardice, deliberately targeting innocent, defenseless children and young people who should have been enjoying one of the most memorable nights of their lives.”

ISIS claimed responsibility for what it called a revenge attack against “Crusaders”, but there appeared to be contradictions in its account of the operation.

While claiming responsibility on its Telegram account, the group appeared to contradict the police description of a suicide bomber. It suggested explosive devices were placed “in the midst of the gatherings of the Crusaders”.

“What comes next will be more severe on the worshippers of the cross,” the Telegram posting said.

It did not name the bomber, as it usually does in attacks it has ordered, and appeared also to contradict a posting on another ISIS account, Amaq, which spoke of “a group of attackers”. That reference, however, was later removed.