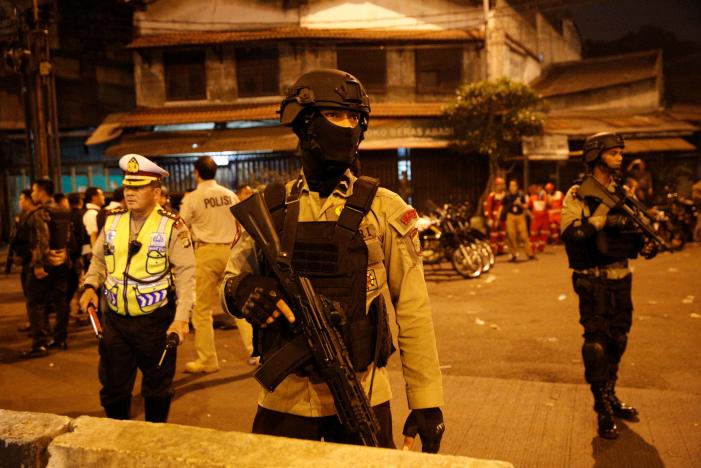 Indonesia has suffered a series of mostly low-level attacks by ISIS sympathizers in the last 17 months, but Wasisto said police had not confirmed any Islamist motive for Wednesday’s bombing.

“The police officers were on duty to guard a group of people who were holding a parade. The parade hadn’t passed yet when the blast happened,” Wasisto told a news conference.

“The two suspects were both male. Their identities will be released later,” he said.

Authorities in the world’s biggest Muslim-majority nation are increasingly worried about a surge in radicalism, driven in part by a new generation of militants inspired by ISIS.

In January 2016, four militants killed four people in a gun and bomb assault in the heart of Jakarta.

While most of the attacks since then have been poorly organized, authorities believe about 400 Indonesians have gone to join the militant group in Syria, and could pose a more lethal threat if they come home.

On Wednesday night, heavily armed police cordoned off the area around the bus station with tape to hold back hundreds of onlookers while bomb disposal officers with protective suits examined the area.

Transport Minister Budi Karya tweeted that he had asked staff to increase vigilance on the city’s transport network.