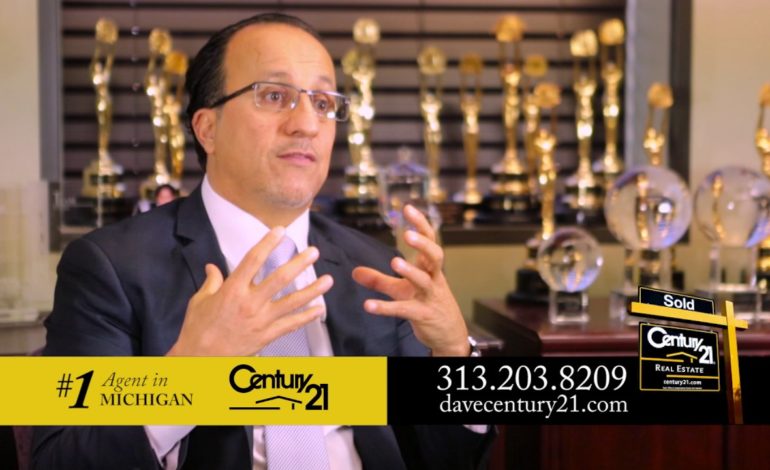 DEARBORN HEIGHTS — Dearborn native Dave Abdallah is a well-known name in the Metro Detroit area. His real estate agent team within Century 21 Curran & Christie has been first in the ranking in Michigan since 2001. In November 2015, he also became a member of the Dearborn Heights City Council. The tapestry of Abdallah’s story is woven with a willingness to overcome all possible barriers.

All these successes did not grow out of a vacuum, however. Abdallah was born in Beirut, Lebanon and emigrated to the U.S. in 1976 in the middle of the fifth grade, where he started learning English at Maples Junior High School in Dearborn. He went on to graduate from Fordson High School in Dearborn in 1984, and then from the University of Michigan-Dearborn in 1989 with a double major in finance and marketing. “I started real estate back in 1989 because my parents had their house on the market and entered into the field despite my parents being against it,” he said, “I used my marketing background to promote myself in the area. My mindset was to run this like a business.”

Abdallah also hired a real estate coach to assist him in getting his business off the ground.

His story is that of an immigrant who was able to cultivate a place in a society that may not always be the most welcoming.

“When you come to this country as an immigrant, you realize the opportunities and take advantage of them,” he said. “You do not presume that success is inevitable. Your success is only based off your willingness to work hard and use your intelligence.”

In regard to his real estate business, Abdallah said a lot of his success comes from spending money on advertising to widely market himself.

His real estate team was given second place nationally in 2016.

“When I first met Dave in 1989, he was just graduating from U of M, and I knew he was destined for great success,” said Bob Curran, president/CEO of Century 21 Curran & Christie. “He was, and continues to be, driven, passionate and honest. The consummate professional, Dave is extremely dedicated to his family, his business and his community, which proved my instincts, almost 30 years ago, spot on.  We are truly blessed to have him.”

Abdallah has been involved in the Dearborn Heights City Council for the past two years, but has been concerned with politics for 12-15 years. He views it as a chance to give back to his community and city as well as the country as a whole. The advantage of being a councilmember is being able to maintain his day job. He can still serve his society while furthering his business prospects.

The seven-member Dearborn Heights City Council meets on Thursday nights to discuss the infrastructure and budgeting of the city. They ascertain that services within the city, such as street cleaning and filling in potholes, are handled properly. They also work with the local police and the community to make sure relations between the two are upheld and remain healthy and fruitful.

Abdallah remains a respected and recognizable figure in the local community and government, but also nationally, with regard to his real estate team.