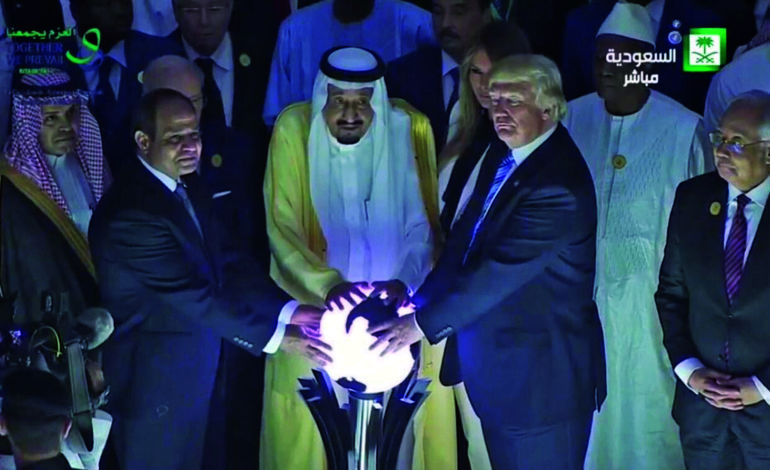 Trump’s affinity for all things “yuge” and slathered in gold was manifest in his choice of visits.

Instead of taking the opportunity to make a diplomatic stride through his first foreign visit since taking office, Trump rather reinforced the commitment to power and money shared between the two warmongering governments through a ceremonious convenance with Saudi Arabia.

In a meeting that resembled a bizarre initiation ritual, the entire summit was rife with symbolism that demonstrated the U.S.’s and Saudi Arabia’s longstanding commitment to perpetuating terror and error.

The spectacle of hypocrisy was superficial in the bizarre sword dance that, for once, exempted dancing as a haram act in the puritanical nation in which Secretary of State Rex Tillerson, Trump and White House Chief Strategist Steve Bannon awkwardly joined along.

The irony of the president, whose campaign ran on Islamophobia, choosing to meet with the regime connoted with Islamic fundamentalism, made sense through the nexus of this shared commitment. King Salman ritualistically awarded Trump his dues, following the U.S.’s $110 billion package to the Kingdom, by basically knighting him with a dog collar that epitomized the continuation of decades of unconditional American loyalty.

It is an even greater irony that the president, who scored loyalty points among Americans disenchanted with foreign policy and security by swearing to “beat ISIS”, indicting the Kingdom, in the throes of his private citizen days, as the “world’s biggest funder of terrorism”, found himself not short of praises for the now-apparently “Magnificent Kingdom.”

A brief review of the history of Western imperialism in the Middle East will remind us that Winston Churchill, British prime minister from 1940 to 1945, recognized that while Saudi Arabia’s British-backed brand of Wahhabism was “bloodthirsty and intolerant”, the Kingdom was a “vital prize for world domination.”

This cynical motto became the template for the ensuing U.S. relationship with Saudi Arabia, the longstanding quest for “world domination” emblemized by the eerie photograph of Egyptian President Abdel Fattah al-Sisi, King Salman and Donald Trump gathered around a glowing orb in a display that garnered references to the occultish undertones of the image.

The irony was that the image, while appearing to show that the sinister world leaders were summoning demons, the heads-of-state were actually launching Saudi Arabia’s Global Center for Combating Extremist Ideology.

The nation that exports billions to open up madrassas — schools that perpetuate radical Salafist ideology overseas —
was now pressing the U.S. and Donald Trump to rehash anti-Iran fear mongering rhetoric.

Next on Trump’s agenda was a straight-shot trip to Israel, another country with a comparably atrocious human rights record, stopping to place his tiny hands on the Western Wall, once again feigning religious reverence and unity despite his character marked by divisive rhetoric.

From Saudi Arabia to Israel, it appears as a brash and comedic contradiction that the xenophobic president finds such amiability in the nation housing Islam’s most holy sites.

Yet it makes more sense to recognize that Saudi Arabia, a nation whose atrocious human rights record at home and abroad renders its government in practice no farther from Islam, is part and parcel with Trump on the shared value of the almighty dollar.