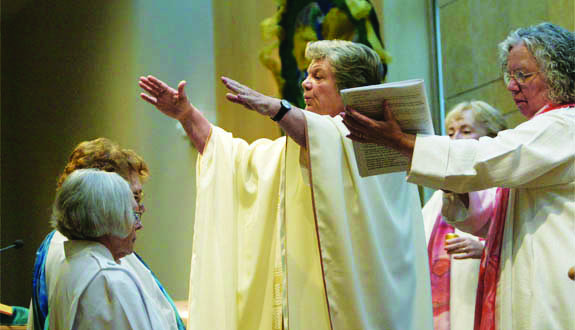 DEARBORN — “Qali’bu Maryam”, translated as “the Heart of Mariam”, became the first U.S. women’s mosque when it opened up in northern California in April.

Describing the mosque as an “inclusive space”, founder Rabi’a Keeble opened up a center where men and women pray side by side.

“What is important to me is not, necessarily, to see men and women praying together,” Keeble said in an interview. “Men and women should never have been separated.”

Report No. 3 from the 2011 U.S. Mosque Study quantified the discrepancies around women in public arenas and institutions. Less than one-fifth of women— holding steady in the past decade at 18 percent— attend public Friday prayer sermons at the mosque, and a two-thirds majority at 66 percent use dividers to separate women’s spaces from men’s.

Noha Beydoun, a member of the board of trustees and the Ladies’ Board at the Islamic Center of America, disagrees that separate spaces or different roles necessarily categorize religious spaces like hers as being inherently unequal.

“There are a lot of women active at the ICA,” she said. “they run throughout the mosque, taking on these issues part and parcel to the mission of Islam.”

Her experiences at the ICA were generally positive, with no shortage of opportunities and platforms for women’s engagement and dialogue.

“The Ladies Club is one of the most important committees advocating for women’s issues around the mosque,” she said. “Whether it’s domestic violence or women in the workforce. I’ve never felt like I’ve been sidelined when it comes to advocating for these issues. My vote is as equal on the board of trustees as the man who has been there for 30 years.”

This committee specifically makes women’s issues central—yet it is not the only space in the ICA where women’s voices are heard. Women participate in all other facets of the mosque and are at the forefront of other committees that are integral to running the center.

“The Ladies Committee shouldn’t be characterized as the only committee for women’s involvement in the mosque,” Beydoun clarified. “Rather, it is considered an emphasis on the extra attention and prioritization of issues that affect women, mothers, daughters, sisters, wives, in the community because they are central to the community and the mosque.”

Nidhal, a Coptic orthodox woman living 20 minutes from Detroit, said she finds that many of the cultural aspects of her church seldom practice what they preach.

“I’m not a religious expert or anything,” she said, “but the Judeo-Arab tradition of separating Muslim and Christian women in the church is not in line with what Christ preached.”

She said she believes that not only are some of the physical practices concerning, but the patriarchal orientation of these spaces engenders practices she finds unjust and unfair.

“For example, very strict divorce laws within the Coptic church discourage women from leaving a marriage that may be abusive, for instance,” she said.

However, she stressed that culture is separate from faith.

“These are things we could look more into our religion, which advocates justice and equality, to check our cultures with,” Nidhal said. “The misogyny I criticize has no bearing on my faith as a Christian, which also teaches me to call out injustice as I see it.”

Like Nidhal, Beydoun said she believes misogyny is a problem of society, not an inherent issue of religion.

In turn, old world role-delegation has an effect on how women’s issues and voices in the church and mosque are represented.

“It’s a religious obligation to make [women’s issues] central,” Beydoun said, acknowledging that when women’s issues are not respected, “it’s a symptom of the society as a whole, not of the religion in the institution.”

The Antiochian Orthodox Basilica of Saint Mary in Livonia, which is part of the Greek Orthodox Church of Antioch, boasts a 90 percent Arab population. The church has no shortage of social groups. It hosts a parish council, or board of directors, as well as a ladies society and a men’s fellowship. It also has an Arabic school, a Montessori school and a senior heritage.

While women in the Orthodox Church are barred from the priesthood, Father George Shalhoub, St. Mary’s founder and pastor, said that women in his congregation, consisting of many professionals such as lawyers, teachers, nurses, doctors and pharmacists, assume a “great deal” of public roles.

“Women are equal to men in our church in every aspect of life, [they] do not take a secondary role,” he said.  “The women in our church give great support for the mission of the church. They do teach, they do sing in the choir…[and] the ladies society takes care of the church, serving the need of the church for functions such as fundraising, fashion shows, bake sales, teaching, helping with the refugees, and they do a great deal of outreach to a few places that support single mothers.

“You have to look at it as created being equal,” he added, stressing that equality does not imply identicality between the sexes. “We have different functions, [and] each [sex] has to give his or her gift.”

Many evidently agreed that the cultural dynamics in religious institutions, as well as their proposed solutions, reflect society, not necessarily doctrine.

Sheikh Ibrahim Kazerooni of the Islamic Center of America said he believes that “Islam doesn’t distinguish on gender basis.” He added that “the rationale [shouldn’t] be to marginalize half the community.”

He cited “cultural reasons” as a cause for the disparities and said no leadership role or space in Islamic institutions or Muslim societies says to exclude women.

“If you see any hindrance, it is cultural rather than theological,” he said.

Kazerooni said that through education and encouragement, the equality that is hailed in his religion can manifest in society.

“Not only [should we] educate power handlers,” Kazerooni said, “[But] our sisters also need to be informed that they shouldn’t take this lying down and accepting how it is back home. We need to be encouraged to come forward. We have doctors, professors, lawyers, and these [women] are members of our community that contribute to the well-being of society.”

Beydoun, too, agreed that religion should be a guide for the community rather than the community dictating the orientation and social structure of religious institutions.

“We don’t have to think of [misogyny] as an Islamic problem,” she said. “But the people running these religious institutions are humans, and this is a symptom of a greater societal problem.”