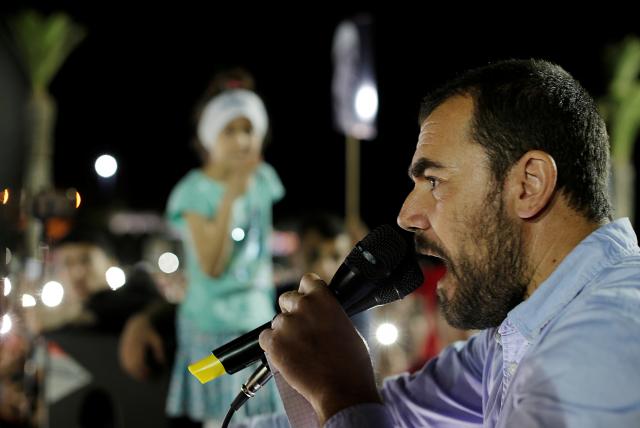 Moroccan activist and the leader of ''Hirak'' Nasser Zefzafi gives a speech during a demonstration against injustice and corruption in the northern town of Al-Hoceima, Morocco/ Reuters

RABAT — A leading Moroccan activist was arrested on Monday alongside other protesters caught up in a wave of rallies against official abuses and corruption in the north, state media said.

Nasser Zefzafi, who has helped organize months of protests, would be investigated on charges of “threatening national security” and other crimes, state news agency MAP said, citing the general prosecutor.

Protests are rare in the North African kingdom. But tensions have been simmering in Zefzafi’s home city of Al-Hoceima since October when a fishmonger died after being crushed inside a garbage truck while trying to save his fish confiscated by police.

The Al-Hoceima protests have been some of the most intense since the 2011 “Arab Spring”-style unrest that prompted the King to devolve some of his powers to an elected parliament, though the palace still holds ultimate authority.

Authorities first tried to arrest Zefzafi after he interrupted a sermon during Friday prayers in Al-Hoceima, a government official said. But supporters poured onto the streets and clashed with police as he left the city.

He was detained on Monday and transferred with other arrested protesters to the judicial police bureau in Casablanca, MAP said.

Authorities say they have arrested 20 people since Friday. Activists say 28 have been detained. Charges against them include receiving “foreign funding and logistical support to undermine the Kingdom’s integrity”.

Protests in solidarity with Zefzafi’s “Hirak” movement were held across the country on Sunday night, including in Rabat and Casablanca, and other urban areas.

The public anger over the fishmonger’s death echoes Tunisia’s 2011 uprising when a young street vendor set himself on fire after police confiscated his fruit and vegetables. That uprising swept Tunisian President Zine El-Abidine Ben Ali from power and triggered “Arab Spring” revolts across the region.

But protests in Morocco are calling for greater freedoms and reform of the system and not directly against the king. Morocco has a deeply rooted monarchy – the Muslim world’s longest-serving dynasty.

The unrest comes at a sensitive time, nevertheless, as the kingdom presents itself as a model of economic stability and gradual change and a safe haven for investment in a region torn by violence, Islamist militancy and upheaval.