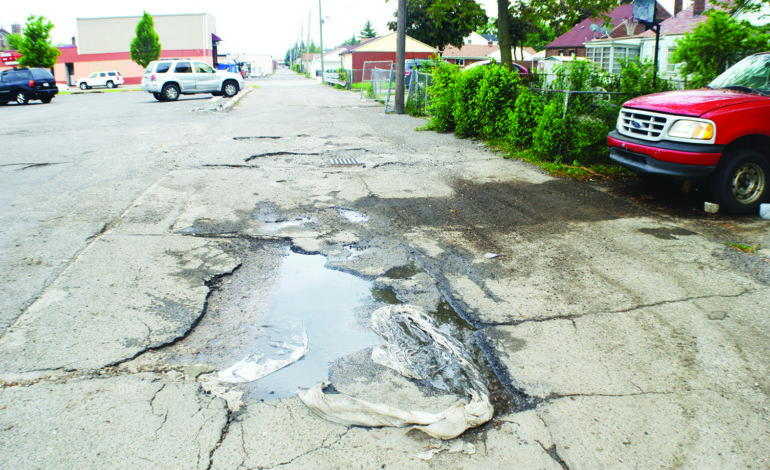 DEARBORN — Amid significant plans to pull the city into the future, forgotten remnants are driving it back to a history paved by segregation.

Explicit disparities between Dearborn’s west side and the east side have long been the proverbial elephant in the room.

Michiganders contend that infrastructure conditions vary greatly between poor and more wealthy communities throughout the state, and the disparities are even more apparent on a smaller scale in Dearborn.

The state’s deteriorating infrastructure, including aging roads and pipes, have recently placed the issue on an international stage, especially after cost-cutting measures forced residents of Flint to drink water contaminated with lead from corroded pipes.

While roads throughout the city are incrementally being replaced and maintained, some Dearbornites complained to The AANews that alleyways — vital avenues for their businesses and homes — have been neglected for too long to the east of the Greenfield Road, while conditions are superior in the west.

“It looks like the worst part of Lebanon,” an irritated resident who wished to remain anonymous said as he looked onto a deep pothole in the alley behind his home. “I have to drive through the potholes every day to get to my house. We’re not asking for regular maintenance; this is an urgent situation.”

Another resident, Jamil Almoussa, echoed his frustration with the inconsistent municipal services in his neighborhood.

Almoussa said he was content with the quality of life after immigrating to the States from Lebanon in 2000. However, he noticed a drop in the city’s attentiveness in upkeeping his neighborhood about two years ago.

Portions of the alley behind his home, which provides access to his garage as well as a local business, is comprised of crumbled asphalt. Other alleys are unpaved, leading to potential damage to cars.

“Why have they forgotten about us in the east?” Almoussa asked. The city’s approach is to tackle areas with a vital commercial presence, followed by surface repairs to the most damaged portions and a long-term scheme to update the alleys, along with the infrastructure underneath, Mayor Jack O’Reilly told The AANews.

Sheppard-Decius added that the city’s engineering department is trying to determine the best short and long-term solutions to repair alleys, although funding continues to be a determining factor. Once the budget is allocated for those repairs, it can take several months to prioritize alleys, plan repairs, hire contractors and finally begin patching or construction.

The city’s engineering department has already rated the state of every road and alley, although repairs have not yet been scheduled.

However, some alleyways that require immediate attention in the east end are already slated for a complete renovation later this year, according to Michael Bewick, executive director of the East Dearborn Downtown Development Authority. Namely, alleys behind the Arab American National Museum, Dearborn Fresh and Midwest Vision Center are slated for reconstruction later this year.

“It looks like the worst part of Lebanon. I have to drive through the potholes every day to get to my house. We’re not asking for regular maintenance; this is an urgent situation.”

Even as alleys in the city’s prominent business districts see imminent upgrades, the question remains: When will attention turn to those in other parts of the city? Will development of the east side’s residential areas continue to stifle even though Dearborn’s earned a $9 million budget surplus from the state in January?

On May 23, Dearborn’s City Council approved a budget for the 2018 fiscal year, with a half-million dollars allocated specifically for alleyway repairs in east Dearborn, primarily in the downtown area.

Councilman Mike Sareini told The AANews that alleyways used to be upgraded annually before they were taken off a regular maintenance cycle several years ago due to funding constraints. The city has been touching up the alleys as needed with the money allocated to fix roads, he added.

Sareini also said a federal mandate requiring that sewage water does not spill into rivers means the city needs an upgraded system that supports the separation of sewage flow and drained rain water — a costly and timely undertaking. Primarily, most alleyways cannot be immediately repaired due to the need for a comprehensive gutting of aging pipes — a network of sewer lines and drainage systems — buried beneath alleys and roads, according to Mary Laundroche, Dearborn’s public information director.

“It doesn’t make sense to reconstruct the alleys and later find out we need to go back and tear them up,” Laundroche said.

Currently, sewage from homes and businesses run from smaller pipes that meet with larger ones underneath alleys and roads. The combined drainage is then collected and sent to the Detroit Wastewater Treatment Plant, which purifies the water before it’s dumped into the Detroit River.

That method is costly, however, and a more efficient separation process can be achieved by replacing current pipes with different ones especially designed to carry either sewage or rain water, Dearborn’s engineering director, Yunis Patel, told The AANews.

He said the city will implement a combination of the two-pipe system and other areas will keep sending sewage to Detroit for treatment.

Patel said that mandate was implemented more than a decade ago and that most cities are still looking for the resources to upgrade their systems. To fully implement the two-pipe system, per an update to the mandate in 2009, and redo the alleyways above them could take until 2025, he added.

Simply put, the city cannot come up with the money to redo the alleyways – from pipe, to concrete to asphalt — for about another decade.

For the short haul, Patel said a limited $500,000 budget can fix a total of approximately 6,000 linear feet of eroded asphalt in alleyways. For example, the city will patch 200 feet here and 400 feet there,
prioritizing the worst portions, beginning later this year or early in 2018. The fixes would be completed close to the end of next year. Then why are west Dearborn’s alleys in considerably better shape than in the east?

The ones in the east were constructed decades earlier, Patel said. West Dearborn’s business corridors were built in the 1940s to 60s, while construction of much of east Dearborn’s alleyways began in the 1920s.

He added that asphalt can stay intact for up to 12 years, but usually deteriorates more quickly with harsh weather conditions and salt.

The city has reconstructed only a handful of alleys in recent years. Some of them have been turned into city-owned gravel alleys. Patel said that if residents want them paved, they must pool the money and the city will commission a contractor for the job.

In the meantime, residents can expect sporadic temporary fixes and can report potholes to the city’s Public Works Department at 313-943-2107.