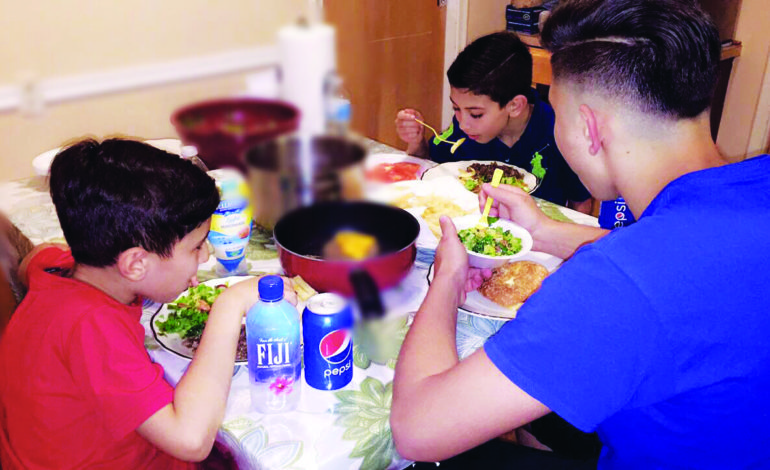 DEARBORN — With more than 17 hours until sunset each day during Ramadan, it may seem impossible for children to complete their fast, but that’s not the case.

Many children have chosen to observe the holy month, which began on May 27 this year, with their parents and teenage siblings. Some adults, on the other hand, struggle to complete their fasts.

According to local parents and the children themselves, their strength stems from the spirituality, gratitude and familial atmosphere they feel during the month— which they truly say they don’t want to miss out on.

Twelve-year-old Mariam, a pro, has been fasting since the age of 9— the age girls are usually required to fast— and shared what she’d learned about the holy month over the years.

“We fast for many reasons,” she said. “We discipline ourselves and we control our body and our mind… The second reason is that Ramadan gives us an opportunity to be with our family; not just our family that we live with, but also relatives outside the house. The third reason is it makes you grateful for what you have.”

When Mariam eats a date and picks up the water bottle, about to drink after a long day of fasting, she said she immediately thinks of those starving and thirsty on the streets.

“They don’t have anything,” she said. “We should be grateful for what we have, Alhamdillah (Thank God).”

Her mother, Rema, admitted that she worried for her daughter when she started fasting at 9.

“But, Masha’Allah (God has willed) she had more energy than 10,000 of us adults did,” Rema said, adding that just as her daughter said, the main point of Ramadan is to discipline yourself.

“You make sure that your mind is able to control any outside factor, any worldly factor,” she said. “Refraining from drinking and eating is a mindset.” Rema said this teaches children how to control anything in life and also allows them to feel a sense of community, which is very powerful and can undeniably prevent them from doing drugs and engaging in other harmful acts later in life.

As for fasting while attending school, Mariam said her focus on her work in the classroom distracts her and keeps her occupied.

She said 90 percent of her class at Bryant Middle School is fasting and are allowed to sit and watch their classmates during gym— depending on how they feel.

“She tells us to answer the questions without having to explain, so we don’t get thirsty from all the talking,” he said. “And, all the kids who are fasting can sit at their own table during lunch.”

He and his brother Mohamad, 11, are not required to fast, but only do so to practice for when they reach the obligatory age— which tends to vary for boys— and also because they want to feel with the less fortunate.

They said the practice makes them feel grown up like their 15-year-old brother and teenage cousins, as they are just as strong handling the long days.

To waste time, the brothers said they play with their friends during gym and even play basketball before Iftar, the Ramadan mealtime, every day.

“We only get thirsty, not hungry,” they both said, adding that they drink lots of water after they break their fast to remain hydrated the next day.

Mohamad said their favorite thing about Ramadan is spending time with family at iftar and Suhoor, the pre-dawn meal — when they all wake up to eat.

Their mother, Leila Chaban, said she only allows them to fast because they want to, but doesn’t mind if they don’t— not until it’s expected of them.

Dalia Arkoub, a 10-year-old Henry Ford Elementary School student, also shared her experience of fasting since she was 9.

She said that she loves it because it makes her feel happy and powerful, especially when she successfully completes the month.

Even though not all of her classmates fast, Arkoub said it doesn’t affect her or make her feel left out.

“The hardest thing about it is just gym because you have to run and you get thirsty,” she said.

Arkoub said her favorite part is going out for ice cream every day after iftar with her family.

Ramadan is the ninth month of the Islamic calendar and is observed by Muslims around the world as a month of fasting to commemorate the first revelation of the holy Quran to the Prophet Muhammad.