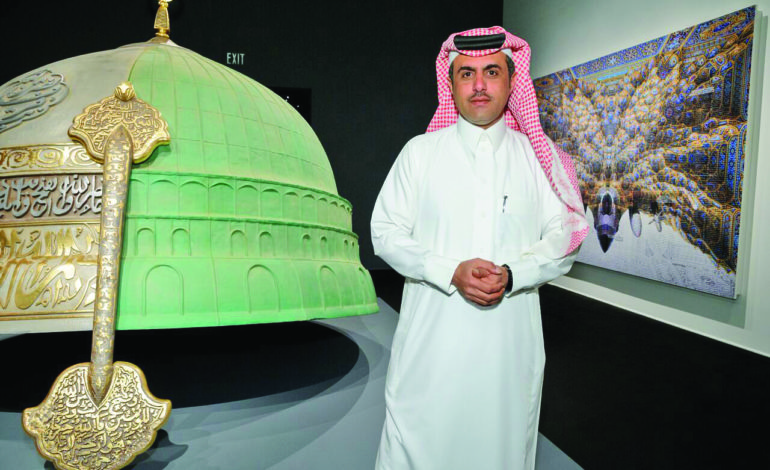 Gharem next to some of his art

RIYADH — Saudi artist Abdulnasser Gharem spent years pursuing his passion on the side, working a government job as a lieutenant colonel in the Saudi Arabian army.

Like his art suggests, he, too, is a diasporic duality of conflicting cultures, identities and ideas.

“I went into the army because it was hard to be an artist at the time,” Gharem, 43, said. “It was 1991 or something…there was no art scene or museums and there were a lot of army bases in the south of Saudi Arabia.”

An artistic identity, under said circumstances, was unknown to the young student and, later, soldier.

He attended the King Abdelaziz Academy, graduating in 1992, before attending the Leader Institute in Riyadh for college.

Yet Gharem credits the Internet to opening his eyes to a world— and a perspective— that helped him tap into his inner creativity.

“In the 90s the Internet just appeared,” he said, “I remember sitting in front of it for hours because it’s like you are discovering a new source of knowledge.”

It was at this time, he recognized, that his exposure to an outside world through the virtual medium helped him come to terms with the “inside” world within himself.

And this is where Gharem identified the start of his true pursuit of education. Audience members at the showing

In 2003, Gharem went on to study art at the Al-Meftaha Arts Village in Abha; and the following year he staged his first group exhibition, “Shattah”, which showcased new manifestations of interpretive art in Saudi Arabia.

His turning point, evidenced by both his creative timeline and themes in his sculptures, came following the September 11, 2001 terrorist attacks.

Learning that a few former classmates were involved in carrying out the attacks, Gharem felt as if his world underwent a pause. As a result, “Pause” became the title of his newest instillation.

It was unfathomable to Gharem how having grown up in the same environment, he and his classmates could have chosen such different paths.

“That question appeared in my head— ‘What if it was me?” he told The AANews. “It was crazy…and that’s what affected me to do this artwork.”

Many tragedies and events in his local as well as the global community come together with the common theme illustrating the tensions between hope and progress and between faith and identity.

His 2007 instillation, “Al Siraat”, depicts a bridge with that word, which means “the path”, spray painted all over it.

The piece, like many of Gharem’s instillations, is meant to illustrate how the fragmentary components of a fragile society fall whim to disintegration into a divergence of paths.

“I had to find my own path,” he said of his own story.

Gharem’s most recent instillation, “Pause”, showcased 11 works of sculpture, print and film which articulate the paralyzing stillness that defined his thoughts as he worked to reconcile and digest the harrowing impact of terrorism.

Many of his works in his most recent show at the Los Angeles County Museum of Art (LACMA) illustrate themes of juxtaposition and conflicting identities and ideologies.

For example, two of his art pieces, “Camouflage” and “Hemisphere”, integrate military and army symbols and themes into heavily Arabic and Islamic styled modern art.

“Camouflage” depicts a tank amidst a stamped and printed backdrop of Islamic art patterns and hidden messages.

Stamps reflect another trope in Gharem’s work; a sculpture of a giant stamp is imprinted with an emblem that reads, in Arabic and English, “In accordance with Sharia law.”

His art, particularly in “Pause”, mingles together the mundane, daily deluge of monotony and blind obedience with interpretive elements meant to subliminally promote free thought and expression.

Signifying his successes each time a viewer of his art appears to be mentally “activated” by his messages, Gharem said he hopes his platform can serve as a catalyst for change in his stringent and strict society and culture.

“The most important thing to me is just to be myself and just try to create speech that the people couldn’t say,” he said. “The media is very hard and is controlled very well, so the art gave you that space and channel to reach that idea.”

Gharem continuously works to educate and encourage youth into embracing and expressing their own inclinations towards art education.

Five years ago, he put together a small studio where 11 students now hone their own artistic or technological assets into platforms for expression and creative communication.

“I don’t want them to just be an artist, but to be a player in society,” Gharem said of his students. “There are a lot of talented people, [but] they just need the right knowledge.”

After Gharem’s Los Angeles exhibition, his art will be featured in a July 8 group exhibition at the Arab American National Museum, alongside works by other Saudi artists.

Opting for highly interactive, multimedia displays that exaggerate and integrate elements from his audiences’ everyday life, Gharem said he believes the most poignant of lessons are transmitted through familiarity.

“I think my most important thing is to activate my people as much as I can and have them be a part of everything,” he said about being a figure that introduces himself as “an example, not an authority.”

“All intellectuals at the end of the day became guards of ideas,” Gharem said.