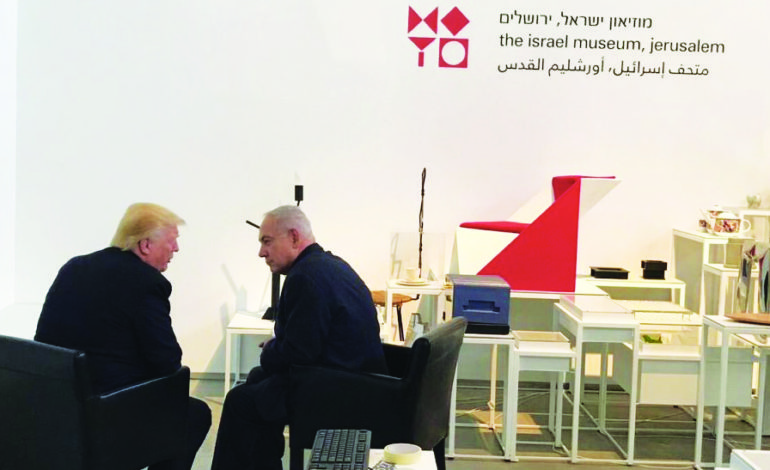 President Trump and Prime Minister Benjamin Netanyahu speak at the Israel Museum in Jerusalem on May 23, 2017

As if he has, overnight, been transformed into a master politician, Donald Trump’s 27-hour trip to Israel has left many analysts mystified.

Quoting former Israeli political adviser Mitchell Barack, the New York Times referred to Trump as the “Liberace of world leaders”, in reference to flamboyant piano player Wladziu Valantino Liberace. The latter, known as “Mr. Showmanship”, was, at times, the highest paid entertainer in the world and his successful career lasted more than four decades.

“Either Trump’s visit was substance-free — or he “is being uncharacteristically subtle” in planting the seeds for a new round of peace negotiations,” NYmag quoted and paraphrased Shapiro’s tweets.

“Liberal” U.S. media, which has stooped to many lows in its attacks on Trump — including his family, his mannerism, his choice of words, even mere body language — became much more sober and quite respectful in the way they attempted to analyze his short trip to Israel and the very brief detour to Bethlehem, where he met with Palestinian Authority leader Mahmoud Abbas.

“Mr. Trump’s speech at the Israeli Museum was so friendly and considerate of Israeli emotions,” reported the New York Times, “that one right-wing Israeli legislator described it as deeply expressive of the ‘Zionist narrative.'”

Palestinian emotions, however, were of no consequence— neither to the Trump entourage, nor, of course, to the New York Times or others in the mainstream media.

The Washington Post, on the other hand, still found faults, but, certainly not because of Trump’s lack of balance and his failure to deride the Israeli occupation and Israel’s mistreatment of Palestinians.

Despite the fact that Trump has, indeed, fully embraced a “Zionist narrative” and a rightwing version of it (for example, he made no reference to a Palestinian state), he still fell short. His performance at Israel’s national Holocaust Memorial (Yad Vashem) did not impress.

Max Bearak wrote in the Post: “Trump’s entry in the guest book at Israel’s National Holocaust Memorial was strangely upbeat, self-referential and written in his signature all caps: ‘IT IS A GREAT HONOR TO BE HERE WITH ALL OF MY FRIENDS — SO AMAZING & WILL NEVER FORGET!'”

Bearak found such choice of words and the style in which it was written sort of offensive, especially if compared with the supposed thoughtfulness of former President Obama.

In contrast, Obama wrote a significantly longer note, which partly read: “At a time of great peril and promise, war and strife, we are blessed to have such a powerful reminder of man’s potential for great evil, but also our capacity to rise up from tragedy and remake our world.”

Neither then, nor now, did the Washington Post bother to examine the historical context in which this particular sentence was written and find the hypocrisy of the whole endeavor.

If they bothered to ask Palestinians, they would have found a whole different interpretation of Obama’s words.

Indeed, wherever occupied Palestinians look, they find “man’s potential for great evil”: A 400-mile Israeli wall being mostly built over their land; hundreds of military checkpoints dotting their landscape; a suffocating military occupation, controlling every aspect of their lives. They see the holiest of their cities, Bethlehem and Al-Quds — occupied East Jerusalem — subdued by a massive military force; thousands of their leaders thrown into prison, many without charge or trial. They see siege; an endless war; daily deaths and senseless destruction.

But since none of this matters to the “Zionist narrative”, it subsequently matters so very little to mainstream American media as well.

Trump’s trip to Israel, however short, was, indeed, a master stroke by the ever-unpredictable Liberace of world politics; although it takes no particular genius to figure out why.

From an American mainstream media perspective, to be judged “presidential” enough, all U.S. presidents would have to commit to three main policies. They are, in no particular order: Privileging the economic business elites, war at will and unconditionally supporting Israel.

So far, U.S. media, which have been otherwise polarized based on political allegiances, have taken a break from their raging conflict over Trump’s presidency, and rallied behind him on two separate occasions: When he randomly bombed Syria and during his visit to Israel.

Ironically, the man has been often judged for lacking substance on numerous occasions in the past. In fact, his trip to Israel was the most lacking and most divisive. However, the fact that he, time and again, reiterated Israeli priorities was all that the media needed to give the man a chance. Their collective verdict seems to rebrand his lack of substance as his unique “subtle” way of making politics.

Israeli media, which are often more critical of the Israeli government than U.S. media ever dare, needed to keep up with its “democratic” tradition. But Trump’s groveling also gave them little room for criticism. The often-impulsive Trump stuck to the script this time and followed his repeatedly rehearsed speech and media comments to the letter.

But Josefin Dolsten insisted on finding a way to nitpick, composing for the Times of Israel the “seven awkward moments from Trump’s Israel trip.”

One of these awkward moments, Dolsten wrote, was “a White House statement listing Trump’s goals for the trip included a hilarious (and juicy!) typo: ‘Promote the possibility of lasting peach’ between Israel and the Palestinians. Yes, we get it — it meant to say peace, but who’s to say the two sides can’t bond over some delicious fruit?”

For Palestinians, it must not be easy to find the humor in these tough times. Hundreds of their prisoners, including their most popular leader, Marwan Barghouti, were enduring a prolonged and life-threatening hunger strike in which they were making the most basic demands for better treatment, longer visitation hours with their families and ending of arbitrary detentions.

More telling, on the day Trump, along with rightwing Israeli Prime Minister Benjamin Netanyahu, lectured Palestinians on peace, 17-year-old Tuqua Hammad was shot for allegedly throwing stones at Israeli military vehicles at the entrance of her village of Silwad, near Ramallah.

Tuqua “was shot in the lower extremities and Israeli troops prevented a Palestinian ambulance from accessing the victim to treat her,” Ma’an news agency reported.

Merely a few miles away, Trump was writing his remarks after visiting Israel’s Holocaust Museum. Regrettably, he failed to meet the expectations of the Washington Post, for unlike Obama, he was not poignant enough in his language and style.

The irony of the whole story is inescapable; but American media cannot see this, for they, too, seems to follow a script— in which Palestinian rights, dignity and freedom are hardly never mentioned. γ