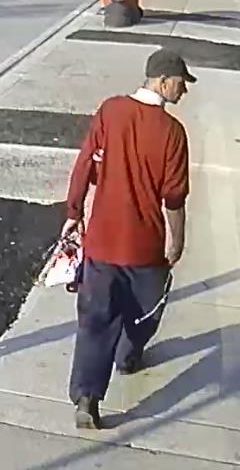 Dearborn — Police are still looking for a man who stole a 13-year-old girl’s cell phone on Saturday, May 27 near Michigan Avenue and Middlesex Street.

The suspect, described as a white or Arab male 25-40 years old with a thin build, walked up to the girl at around 7:30 p.m., forcibly stole her cell phone and fled the scene on foot.  Surveillance footage in the area showed the suspect fleeing the scene northbound across Michigan Avenue toward Middlesex.   He was last seen wearing a red shirt and a green baseball hat.

The victim was not injured. The public is asked to call 313-943-2241 with information or they can call Crime Stoppers at 1-800-SPEAK-UP.  Crime Stoppers is offering up to $1000 in reward money for information leading to the arrest of the suspect responsible for this crime.  You may remain anonymous when reporting information.

“This crime is disturbing because the suspect deliberately chose a young child to victimize,” Dearborn Police Chief Ronald Haddad stated. “Our number one priority is citizen safety. When that becomes jeopardized, we will do everything in our power to ensure the perpetrator is brought to justice.”