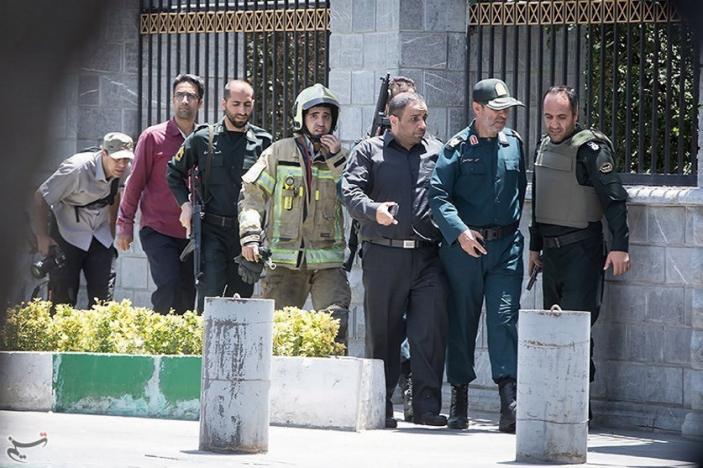 Members of Iranian forces seen during an attack on the Iranian parliament in central Tehran
TEHRAN- Suicide bombers and gunmen attacked the Iranian parliament and the Mausoleum of Ayatollah Khomeini in Tehran on Wednesday, killing at least 12 people in a twin assault which Iran’s Revolutionary Guards blamed on regional rival Saudi Arabia.

ISIS claimed responsibility and released a video purporting to show gunmen inside the parliament building. It also threatened more attacks.

One of them detonated a suicide vest in the parliament, he said. About five hours later, Iranian media said four people who had attacked parliament were dead and the incident was over.

At least 12 people were killed by the attackers, the head of Iran’s emergency department, Pir-Hossein Kolivand, was quoted as saying by state broadcaster IRIB. Some 43 people were wounded.

The assault took place at a particularly charged time after Saudi Arabia and other Sunni Muslim powers cut ties with Qatar on Monday, accusing it of backing Tehran and militant groups.

The attack was the first claimed by ISIS inside the Shi’ite Muslim country, one of the powers leading the fight against ISIS forces in neighboring Iraq and Syria.

The powerful Islamic Revolutionary Guard Corps accused Saudi Arabia of being behind the action.

“This terrorist attack happened only a week after the meeting between the U.S. president (Donald Trump) and the (Saudi) backward leaders who support terrorists. The fact that [ISIS] has claimed responsibility proves that they were involved in the brutal attack,” a Guards statement said.

Saudi Foreign Minister Adel Al-Jubeir, speaking in Berlin, said he did not know who was responsible and there was no evidence Saudi extremists were involved.