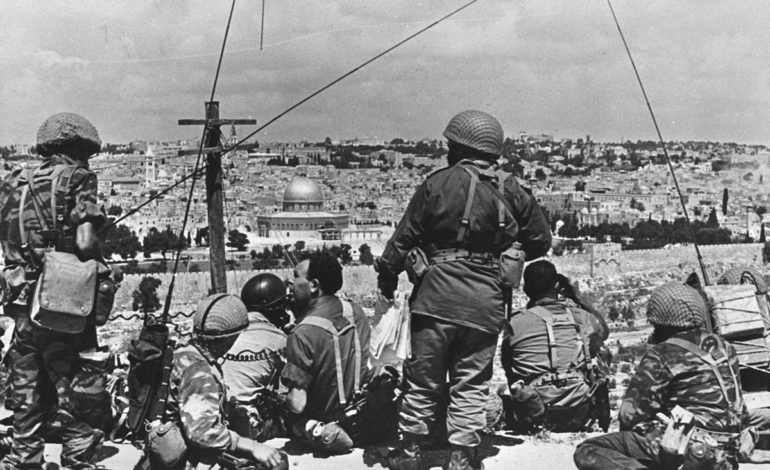 DEARBORN — The 1967 Six Day War was one of the most salient events of the Arab-Israeli conflict, its effect evident through its shaping of Israeli and Arab political discourse.

While its byproducts continue to resonate, the events of the Six Day War are solidified largely through oration and narrative.

“There’s historical revisionism and revisionism of the revisionism,” Roane Carey, managing editor of The Nation, told The Arab American News. “I’m not certain where we as a country stand.”

Before 1967, recruitment was the key strategy of armed forces on both sides. In Israel, this translated into systematically transforming a consistent stream of nationalized immigrants into prospective military operatives, poised to defend the budding nation state.

On the other side, Arab nationalism, emboldened by then Egyptian President Gamal Abdel Nasser, served as the emboldening political patriarch whose appeals to Arab unity, self-determination and socialism remedied the crippling realities of ethnic division, imperialism and weak leadership that plagued the Arabs in the throes of a post Ottoman Empire, Sykes-Picot rationed Arab world.

When Egypt, Jordan and Syria were defeated post 1967— resulting in a completely occupied West Bank and Gaza as well as capturing both Egypt’s Sinai and Syria’s Golan Heights, destroying Egypt’s air fleet and obliterating nearly tens of thousands of Arab soldiers— a significant blow was levied on Arab morale.

“On the Israeli side, it really did cause some deep changes in not just their attitudes towards Arab-Israeli relations, but also the promise and potential of Zionism,” Carey said. “It led to a ‘millennialist’ optimism about reconquering the land.”

The expansion of settlements and mobilization of territorial expansion further into the remainder of Palestinian land were catalyzed by the militaristic and territorial Israeli victories. It emboldened Israel’s settlement-oriented mentality that propelled the nation all the way to the far right.

It was also post ’67 that U.S. attitudes towards the Middle East became aggressively pro-Israel.

“Before 1967, the U.S. was edging towards an alliance but was not fully on board,” Carey said, alluding to both the Truman administration in 1948 and the Kennedy administration as aiming for balance. “Ever since 1967, relations between the U.S. and Israel became tightly cemented. U.S. governments saw Israel as a regional military power which they can depend on…Therefore, [it became a] regional hegemony.”

Egypt sought vengeance and reclamation of its occupied peninsula during the War of Attrition (1969-1970), where a swift recovery, aided by the backing of the Soviet Union, helped Nasser muster up the military might and confidence to substantiate an effort that failed to produce a land transfer back to Egypt. Following Nasser’s death in September of 1970, this land transfer did not resume under his successor, Anwar Sadat. When the Nixon administration brokered “the Rogers plan” between the Arab states and Israel that put limits to aggression and missiles for the maintenance of territory.

Israeli and Egyptian overconfidence in the lead up to the 1973 Yom Kippur War, where the element of surprise and joint efforts between Egypt and Syria helped Egypt move into the Sinai and reclaim territory, signified early gains for the Arabs that would resonate psychologically for both Arabs and Israelis. Feeling threatened, the Israelis brokered the gun-and-olive branch disengagement accords in 1974. The 1978 Camp David Accords, a deal brokered by President Carter, which gave Egypt back its coveted Sinai while reinforcing the commitment to political compliance on the part of both Sadat and Israeli Prime Minister Menachem Begin, also rewarded Israel with military aid packages from the U.S. that continue to this day.

1971’s Black September involved a bitter entanglement with the Jordanian Hashemite Kingdom that resulted in the deaths of many Palestinians and the expulsion of the PLO from Jordan into Lebanon.

Nonetheless, the PLO was recognized in 1974 as the unofficial representative of the Palestinian resistance. It mainly operated in exile and, after being kicked out of Jordan, began operating in areas of Lebanon.

The narrative of visceral antagonism between the Lebanese and Israelis was not a steadfast reality before the early ’80s. When Israelis began to march into Lebanon, some Lebanese actually welcomed their presence as a counterbalance against the influx of Palestinian fighters.

The escalation followed an attack on a bus on Israel’s Coastal Highway that killed 38 civilians by Fatah, a subgroup of the confederated multi-party Palestine Liberation Organization. In response, Israel occupied Lebanon all the way up to the Litani river and launch a full scale invasion whose heavy bombardment displaced the Lebanese and destroyed many of their homes and villages.

The Arab-Israeli conflict was officially brought within Lebanon’s borders, spurring sectarian divides that would serve as the precursor for the internal strife of its civil war and its external battles that laid the groundwork for the 1982 Israeli invasion.

Obliterating the PLO presence in Lebanon only continued during the 1982 war, when subsequent military occupation and destruction eventually engendered resentment among the mainly Shi’a Southern Lebanese, some of whom showered the troops with flowers and candy upon removing the PLO operatives before overstaying their welcome.

Israel’s participation in the massacre at Sabra and Shatila, in which a right wing Lebanese militia assaulted and killed at least 800 people in those camps, was a catalyst in changing opinion and narratives. In addition, the historical marginalization of the Shi’a people, coupled with a reiteration of Israel as a sworn political foe, formed the ideological basis for the birth of Hezbollah militia in 1983. Building support among disenfranchised Shi’a within Lebanon, they were able to amass a well organized and led political organization that, aided and supported by Iran, served as a counterweight against the U.S. and Israel.

In occupied Palestine, too, frustration mounting from the brutal occupation and settlement expansion post 1967 culminated into a unified movement of civil disobedience and resistance. 1987’s Intifada also could accredit some of its successes to its defensive position unifying Palestinians to resist on their own territory. Rabin, Clinton and Arafat on the White House lawn on September 13, 1993 – Archive

The Camp David accords of 1978, important in fostering an albeit peaceful message of military status quo, extended its aims by facilitating a body of law enforcement, the U.S.-funded Palestinian Authority, to contain Palestinians and quell out-of-line dissent during 1993’s Oslo Accords, which was signed in the White House in the presence of President Clinton, Israeli Prime Minister Yitzhak Rabin and PLO Chairman Yasser Arafat, on September 13, 1993. During that same year, Israel launched an attack (Operation Accountability) against the Southern Lebanese Shi’a insurgency led by Hezbollah. The resulting cease fire was broken by continued shelling that led up to Israel initiating military Operation Grapes of Wrath, also known as the Qana massacre (1996).

The 15-year-long conflict in Lebanon (1985-2000) ended when Hezbollah drove out the military occupation in the south from Israeli self proclaimed “Security Zone”, making the Hezbollah led Islamic Resistance, a popular movement among Arabs. Their popularity and role as liberators and strong Arab opponents to Israel was highly revered in 2006, where many considered Hezbollah’s steadfastness a victory for Lebanon that the West and Israel wouldn’t admit.

Unfortunately for the Palestinians, the precedent of aggressive settlement expansion defined by ’67 carried on into the new millennium. A”Land for Peace” proposal, offered by the Arab leaders in 2002 during the Arab Summit held in Lebanon, continued to be ignored by Israel.  Following Yasser Arafat’s death in 2003, Israel still showed no indication of ceasing the occupation. A second intifada was waged in 2000 and lasted until 2005. This had the diplomatic result of forcing Israel to withdraw from Gaza. However, settlements carried on and expanded into the West Bank across through successive Israeli governments, left or right, Likud or Labor, into the new millennium.

Yet, as Ronald Stockton, professor of political science at UM Dearborn puts it, the current settlement crisis can always be traced back to Israel’s post 1967 policy.

“Had [Israel] offered the West Bank and East Jerusalem back, and had they allowed the refugees of 1967 to return, the world would be a different place,” Stockton said.