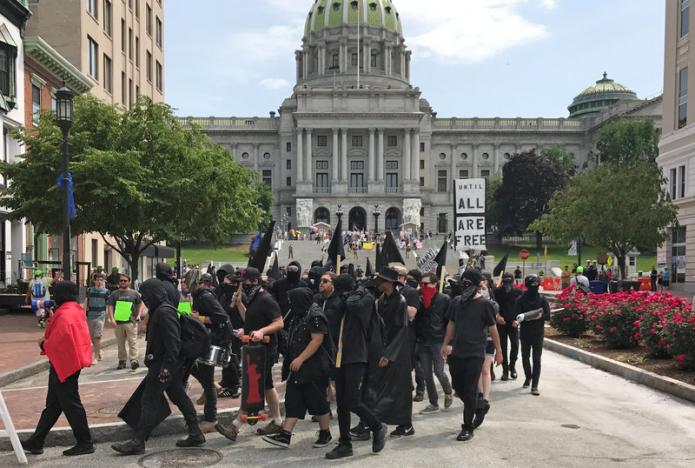 Courtesy of Reuters
SEATTLE- Protesters held rallies across the United States on Saturday to denounce sharia law, the Islamic legal and moral code that organizers say poses a threat to American freedoms, but critics believe anti-Muslim hatred is behind the condemnation.

ACT for America, a self-described grassroots organization focusing on national security, staged rallies in New York, Chicago, Boston, Denver and Seattle, as well as many smaller cities. Hundreds of people pledged on social media to attend an event that ACT billed as “March against Sharia.”

On the steps of the Pennsylvania state capitol in Harrisburg, barricades and a heavy police presence, including officers mounted on horses, separated about 60 anti-sharia demonstrators from an equal number of counter-protesters. Many of the latter were dressed in black masks and hoods and chanting “No Trump, no KKK, no Fascist USA.”

The atmosphere was tense but the protest went off with no violence and only one arrest, police said.

More than a dozen men belonging to the anti-government Oath Keepers were on hand, invited by ACT to provide security. Most of them carried handguns.

Chris Achey, 47, of Allentown, Pennsylvania, said he did not hate Muslims but believes that much of Islam is incompatible with Western culture.

“The Constitution is the law of the land,” he said. “We have to be careful with who we let in the country.”

On its website, ACT described sharia, which covers many aspects of Muslim life including religious obligations and financial dealings, as incompatible with human rights. It said sharia justifies the oppression of women and homosexuality, and advocates female genital mutilation.

But critics say the organization vilifies Muslims and has repeatedly equated Islam with extremism. In their view, the rallies are part of a wave of anti-Muslim and anti-immigrant sentiment fueled by President Donald Trump, who called for a ban on Muslims entering the country during his election campaign.

Molly Freiburg, 33, of Philadelphia, was one of the counter-protesters but not part of the larger group clad in black.

“America is not in danger from sharia law,” she said. “This manifestation at the Capitol is actually a way to make our Muslim neighbors feel uncomfortable.”

In Seattle, about 75 anti-sharia protesters were outnumbered by counter-protesters at a rally that was moved from Portland, Oregon. Tensions are running high in Portland after a man yelling religious and racial slurs at two teenage girls on a commuter train fatally stabbed two men who tried to stop him.

The Council on American-Islamic Relations (CAIR), the country’s largest Muslim advocacy group, urged Americans to participate in one of several local educational events being organized in “a peaceful challenge to Saturday’s hate rallies.”

It also warned Muslims to take extra precautions against potential violence over the weekend.