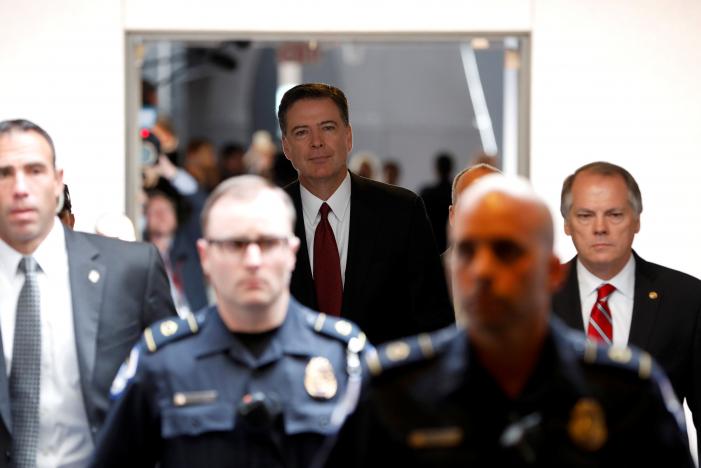 WASHINGTON- Former FBI Director James Comey accused President Donald Trump on Thursday of firing him to try to undermine the agency’s investigation of possible collusion by Trump’s campaign with Russia’s alleged efforts to influence the 2016 presidential election.
In the most eagerly anticipated U.S. congressional hearing in years, Comey told lawmakers the Trump administration had lied and defamed him and the Federal Bureau of Investigation after the president dismissed him on May 9.
During more than two hours of testimony, Comey told the Senate Intelligence Committee he believed Trump had directed him in February to drop an FBI probe into the Republican president’s former national security adviser, Michael Flynn, as part of the broader Russia investigation.
Comey would not say whether he thought the president sought to obstruct justice, but added it would be up to special counsel Robert Mueller, who is now investigating the Russia allegations, “to sort that out.”
“I don’t think it’s for me to say whether the conversation I had with the president was an effort to obstruct. I took it as a very disturbing thing, very concerning,” Comey testified.
Sitting alone at a small table facing a bank of senators who fired question after question, Comey gave short, deliberative answers. He painted a picture of an overbearing president he did not trust and who pressured him to stop the FBI probe of Flynn.
Trump critics say any efforts by the president to hinder an FBI probe could amount to obstruction of justice. Such an offense potentially could lead to Trump being impeached, although his fellow Republicans who control Congress have shown little appetite for such a move.