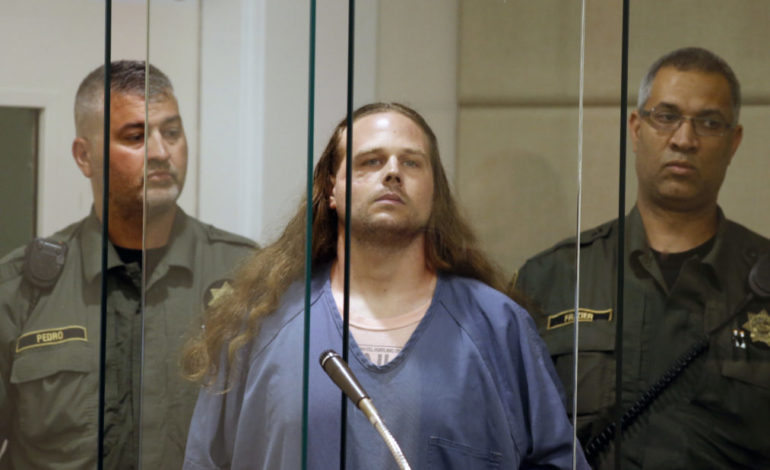 PORTLAND- The man accused of murdering two men and wounding a third on a Portland, Oregon, train was led away from a courtroom on Wednesday by sheriff’s deputies as he shouted that he had acted in self defense.
Jeremy Christian, 35, had stood quietly in a glass-walled holding cell in the courtroom throughout a brief appearance until its conclusion, when he blurted out that he was “not guilty of anything but defending myself against violent aggression by Micah Fletcher,” the surviving victim of the attack.
Fletcher was in court for the hearing.
Christian was charged with murder in the May 26 stabbing deaths of two men who intervened on a commuter train when he shouted religious slurs at two African-American women, one of whom was wearing a Muslim head scarf. Fletcher, who tried to intercede, was also stabbed.
Christian did not enter a plea on Wednesday to charges of aggravated murder, assault, unlawful use of a weapon, intimidation and menacing.
Prosecutors have said that Christian, who had served a prison sentence for a 2002 armed robbery, slashed the men in their necks before fleeing the train when it stopped. One victim stumbled to his death on a station platform and another died in the rail car where he was stabbed.
The Federal Bureau of Investigation has said it was investigating the incident as a possible federal hate crime.
The attack became an undercurrent in dueling rallies staged in Oregon’s largest city on Sunday by supporters of President Donald Trump and counter-demonstrators who accused Trump of divisive political rhetoric that was encouraging acts of racial and ethnic hatred.
Prosecutors have said that Christian confessed to the train stabbings in a profanity-laced rant recorded in the back of a police vehicle after he was taken into custody.
In an initial appearance before a judge days after the attacks, he entered the courtroom shouting, “Free speech or die, Portland … This is America – get out if you don’t like free speech.”