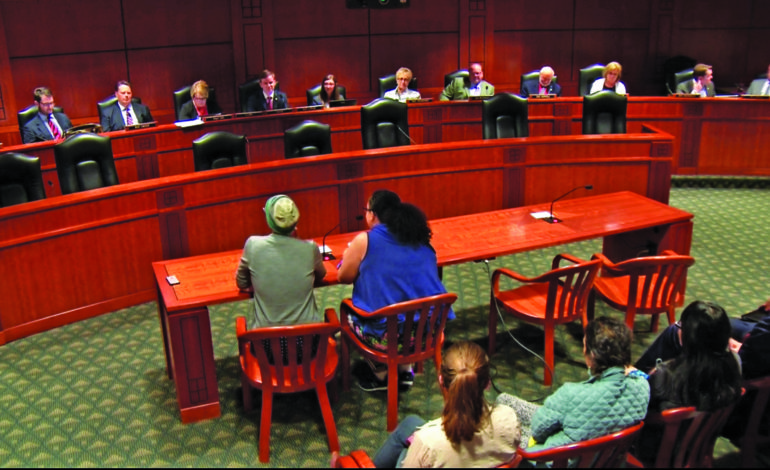 LANSING — Activists and local officials made their final impassioned plea before a Michigan House committee passed bills on Wednesday, June 7 that prevents any city or county from passing “sanctuary” laws.

Its proponents say the bills seek to ensure local governments do not enact mandates that clash with federal immigration laws. Opponents charge that the bills unreasonably force city employees to act as federal agents and widen the trust gap between immigrant communities and law enforcement.

Both bills include the same language, but one deals with municipalities and cities, while the other discusses legislation in counties. The bills are now set to be considered by the entire House.

Opposition at the House

Outside the meeting chamber at the Anderson House Office Building, across from the Capitol in Lansing, a group of lobbyists and advocates against the anti-sanctuary bill awaited their chance to fill the seats. Almost all at the standing room only meeting traveled from other cities and bashed the measures.

One of them is Kururama Sanchez, an intern in the offices of Detroit City Councilwoman Raquel Castaneda-Lopez, who said she has been working to update the language in city policy to ensure Detroit is as welcoming to immigrant communities as possible.

Sanchez told The AANews that the bills represents the continual undermining of local law enforcement and their vital relationship with the communities they keep safe.

She said some local governments and representatives hesitate to implement sanctuary and welcoming policies, especially as the White House has threatened to cut already thin federal funding to cities that chose to do so.

However, there is currently no plan and funding source to make it happen, she said.

She added that there is an ever-increasing support across the state for implementing sanctuary and welcoming policies, while evidence supports that no negative impact would come out it.

“I continue to always place those that are living in fear of separation with families, above all else,” Sanchez said.

Chris Hackbarth, the Michigan Municipal League’s director of state and federal affairs, testified before the House committee members in opposition of the bill. He raised an issue with the bill’s vague terminology. Like that its title includes the word sanctuary, while the text does not include or define the term anywhere.

By mixing local law enforcement and the enforcement of federal immigration law, these bills would substantially increase the need for training in local jurisdictions and likely staffing. Local budgets are under constant downward pressure and these mandates would dilute already scarce law enforcement resources.

The league represents 522 cities and townships around the state. There are no sanctuary cities in Michigan, but there are at least three cities that call themselves “welcoming” and have enacted sanctuary policies for about a decade, all while the federal government has not raised any concerns about their operations, he said.

He labeled the proposed bills as a “poorly crafted solution in search of a problem.”

The bill ultimately restricts local municipalities from enacting polices or ordinances that limit cooperation with federal officials, as made clear at the meeting by the committee chair, State Rep. James Lower (R-Cedar Lake).

But Hackbarth said many cities have enacted policies against asking for someone’s immigration status, as it would not be part of a local officer’s duty or training. He pointed to a 2016 State Department report that about 40,000 individuals failed to display a valid license at a traffic stop.

“That’s 40,000 people who may have left their wallet at home,” he said. “Are we now saying every single one of those individuals has to be asked their legal presence by police?”

That would place any of the communities with a policy against asking the immigration status at a traffic stop at risk for violating the law, he concluded.

Ann Arbor Mayor Christopher Taylor, who also testified against the bills, echoed that the bills seek to create a problem that does not exist. He stressed that Ann Arbor’s welcoming city legislation is carefully calibrated to comply with federal law and proper police practices.

For the households in Ann Arbor, Taylor said the bills would increase profiling, discrimination and break apart hard working families. For the city as a whole, the bills would threaten public safety.

“By mixing local law enforcement and the enforcement of federal immigration law, these bills would substantially increase the need for training in local jurisdictions and likely staffing,” he said. “Local budgets are under constant downward pressure and these mandates would dilute already scarce law enforcement resources.”

Taylor added that the bills would also drive a wedge between police and immigrant communities and discourage victims from reporting crime. As a result, criminals would go free.

Both Hackbarth and Taylor said crime rates were not affected as a result of a city’s welcoming policies. Taylor said Ann Arbor has historic crime lows; this year saw double digit decreases in crime.

State Rep. Jeremy Moss (D- Southfield) echoed those crime statistics, adding that Southfield is among the top 10 cities nationwide that has accepted immigrants and refugees, while enjoying its ninth year of a decrease in crime.

Washtenaw County Sheriff Jerry Clayton said in his testimony that strong law enforcement relationships with community members is vital for fighting crime and, if the bills become law, increases liability and oversteps the knowledge and responsibilities of already trained local officers.

When Suhaila Amen, international student and scholar adviser at the University of Michigan-Dearborn, was growing up during the ’80s in Dearborn, Warren Avenue was barely dotted with stores and restaurants that provided the Arab American community with their needs.

But today, Dearborn is a flourishing community, thanks to the successful businesses of large immigrant populations over the decades.

Amen said the anti-sanctuary bills fail to address the strained immigration situation on a case-by-case basis.

Instead, she said legislation enacts blanket laws while marginalizing communities and shuts the gates on individuals who fled unstable countries.

Amen said lawmakers should be attempting to overhaul the immigration system and identifying where real problems lie.

“People would be more than happy to go through the appropriate channels, if they saw that there was an opportunity for them to find success in doing so,” she said.

She added the country is facing worse domestic issues than immigration.

State Rep. Sylvia Santana (D-Detroit) told The AANews she is concerned that the term “sanctuary” has become taboo. She is a proponent of her district becoming welcoming to immigrants, whom she said would boost economic development and job creation and provide tax benefits to the economy.

She added that many immigrant students lead in research and academic success at local universities and stay to become vital parts of American society.

Santana, whose district covers parts of east Dearborn and who serves on the House Appropriations committee, stressed the importance of connecting resources to people so that they are provided the opportunity to be part of the American Dream.

Rep. Abdullah Hammoud (D-Dearborn) aimed at taking a preemptive jab at anti-sanctuary legislation in the State House, just a few hours before the bills passed.

He introduced a package of 14 bills and two resolutions aimed at expanding immigrants’ civil rights by enacting welcoming policies in the state.

Hammoud attributed the need for the legislation to a spike in hate crimes against minorities and Muslims.

Several of the bills, which received bipartisan support, speak to strengthening community relationships with law enforcement; others seek to affirm that no registry will be upheld that lists residents based on their country or origin, religion or sexual orientation.

He added that 35 percent of all Fortune 500 companies in Michigan are owned by immigrants or children of immigrants.

“The data is on the side of his bill package,” he added.

Aside from thriving communities that embrace diversity, Hammoud’s bills are an attempt to spur a change in perception of immigrants that often stem from some legislators’ fear-mongering rhetoric.

Ultimately, it’s no secret even among elected officials that some capitalize on fear-mongering tactics for political gain, which translates into money and votes.