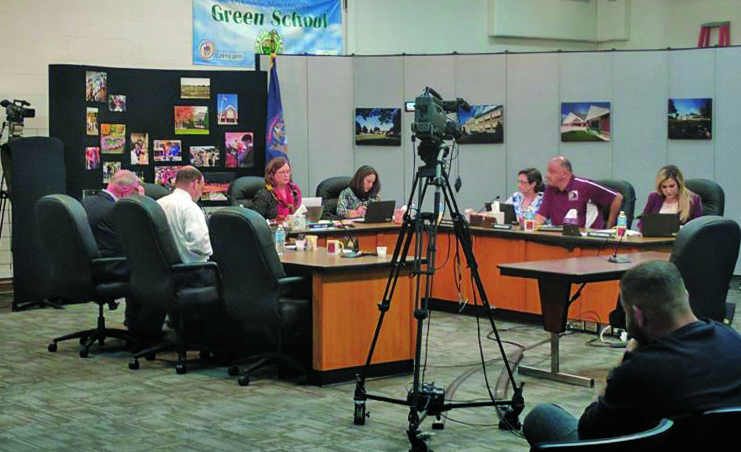 Dearborn School Board of Education

DEARBORN — Despite expectations from the community at large and more than 100 people in attendance, the Dearborn Board of Education did not appoint a new trustee on Monday, June 12. Instead, the board tabled the decision until the June 19 meeting at Henry Ford College.

The board recently interviewed candidates to replace former President Mariam Bazzi, who resigned last month after Governor Snyder appointed her as a Wayne County Circuit Court judge. The remaining six board members were unable to come to a consensus regarding a replacement during Monday’s meeting, which exceeded three hours.

Prior to the vote, a series of speakers took to the podium advocating for a particular applicant.

None of the applicants received four votes, the majority sought by the board. The most applicant received was three votes with another applicant receiving two votes.  Trustee Hussein Berry opted not to participate in the selection process. He didn’t say why.

Initial voting started with Thorpe, who recalled being interviewed two years ago by the board for a then-vacant seat.

“It’s a lot easier in that seat than up here,” he said.

Thorpe based his pick on the fact that the appointed trustee would only be seated until the November 2018 election— which is a very critical period.

“We’ve got some really big decisions to make in that amount of time,” he said, referring to the selection of a new president of Henry Ford College and the possible change of school boundary lines. “So, experience is something that’s very important to me. Because of that, I believe Roxanne McDonald should be appointed.”

Meade said he supports Nasser because she is a “product of the Dearborn Public Schools”, is a substitute teacher and has children in the district.

“She has a master’s degree in public health and a bachelor’s degree in business administration,” he added. “She’s an entrepreneur, so she has gone through the process of determining what is going to work and what isn’t going to work.”

Meade noted that recommendation letters from Bazzi and former trustee Joe Guido also played a role in his decision.

Lane said Nasser is her choice because she has “the written recommendation of the people who preceded her” and “the operational business experience.”

Petlichkoff said she chose McDonald because she brings five years of board experience to the table. She said the only reason McDonald left the board was to serve the community on a larger scale.

“She wasn’t successful,” Petlichkoff said, “but this came about… and she is volunteering her services to step back in [with] full board experience, understands responsibilities, knows her obligations and duties and is fully prepared to move us through the next few months of a college president search and boundary line changes, which she has been involved with before.”

McDonald stepped down last year to run for state representative, but lost to Abdallah Hammoud.

Trustee Hammoud agreed with Thorpe that voting is much harder than being in the candidate’s seat.

She said she chose Nasser because she’s a product of the district, has substituted as a teacher and is invested in the education of children even while launching her own businesses. She added that Nasser also proved to be “proficient in allocating limited resources that accomplish maximum results.”

Hammoud then moved to nominate Nasser, a motion seconded by Meade and Lane.  The motion passed with three yes votes and two no votes with Berry not participating.  Seeking four votes, the trustees continued the discussion, but those supporting Nasser were unable to convince either of their colleagues to change their votes. Nor were Thorpe and Petlichkoff able to persuade the others to reconsider and vote for McDonald.

The members eventually agreed on tabling the discussion.

Allegations that the board is being improperly influenced by the Arab American Political Action Committee to elect Nasser have surfaced on social media. According to Hammoud, the board has been “subjected to serious bullying” online over the past few weeks and each trustee’s integrity has been questioned.

“I was not and will never be pressured by anyone to vote a certain way,” she said at the meeting before casting her vote. “My decisions are guided by my integrity, my respect for this office and my own moral compass.”

Hammoud added that board members are here to make the tough decisions and that it would be a dereliction of their duties to pass this decision on to anyone else.

“AAPAC has a sincere, longstanding commitment to this district and its schools,” she said. “We believe in an open, transparent and fair process. We have confidence in your ability to carefully consider every candidate and ultimately make the best choice for the district.”

She said she felt obligated to clear up the misinformation being spread, but to also be clear about AAPAC members’ rights to lobby and support candidates.

She said AAPAC will respect the board’s decision and continue to work with the school district.

“Our schools and our students come before anything else,” she said.

As determined by state law, if the board does not appoint a trustee within 30 days from the date of the vacancy, the five member Wayne County Regional Educational Service Agency (Wayne RESA), the county’s intermediate school district, will take over the process and appoint a replacement.