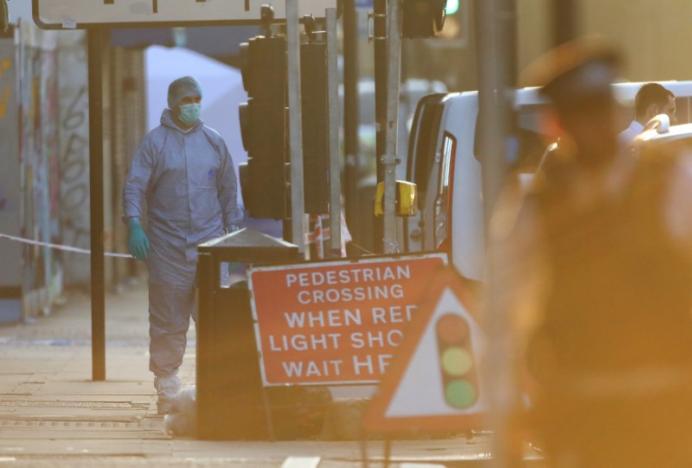 Forensic and police officers attend to the scene after a vehicle collided with pedestrians in the Finsbury Park neighbourhood of North London, Britain June 19, 2017/REUTERS

LONDON ― A van plowed into worshipers near a London mosque in the early hours of Monday, injuring 10 people, two of them seriously, in what Prime Minister Theresa May said was a sickening, terrorist attack on Muslims.

The vehicle swerved into a group of mainly North and West African people shortly after midnight as they left prayers at the Muslim Welfare House and the nearby Finsbury Park Mosque in north London, one of the biggest in Britain.

The driver, a 47-year-old white man, was grabbed at the scene by locals and pinned down until police arrived.

The man was not named by police. He was held on suspicion of attempted murder which was later extended to preparing or instigating terrorism, including murder and attempted murder.

After being seized, he said he had wanted to kill “many Muslim people,” one witness told journalists.

A man, who had earlier suffered a heart attack, died at the scene but it was not clear if his death was connected to the van attack.

“This morning, our country woke to news of another terrorist attack on the streets of our capital city: the second this month and every bit as sickening as those which have come before,” May told reporters outside her Downing Street office.

“This was an attack on Muslims near their place of worship,” said May who later visited the mosque.

The attack was the fourth since March in Britain and the third to involve a vehicle deliberately driven at pedestrians.

It came at a tumultuous time for the government with Britain starting complex divorce talks with the European Union and May negotiating with a small Northern Irish party to stay in power after losing her parliamentary majority in a snap election that backfired.

The mosques’ worshipers, mainly from North and West Africa, had just left special prayers during the Muslim holy month of Ramadan.

Usain Ali, 28, said he heard a bang and ran for his life.

“When I looked back, I thought it was a car accident, but people were shouting, screaming and I realized this was a man choosing to terrorize people who are praying,” he told Reuters. “He chose exactly the time that people pray, and the mosque is too small and full, so some pray outside.”

Another witness Yann Bouhllissa, 38, said he had been tending an old man who had suffered a heart attack when the van was driven at them. The driver was then seized by locals.

“One guy caught the guy and brought him down,” Bouhllissa told Reuters. “When he was on the floor, the guy asked ‘why do you do that?’. He said ‘Because I want to kill many Muslim people’.”

Mohammed Mahmoud, the imam from the Muslim Welfare House, stepped in to ensure the van driver was not hurt until he was bundled into a police van.

“We found that a group of people quickly started to collect around him … and some tried to hit him either with kicks or punches. By God’s grace we managed to surround him and to protect him from any harm,” Mahmoud told reporters.

“We stopped all forms of attack and abuse towards him that were coming from every angle.”

In addition to the man who died, 10 people were injured, with eight taken to hospital, two in a very serious condition, police said.

The driver, who Security Minister Ben Wallace said was “not known to the authorities in the space of extremism or far-right extremism”, was arrested on suspicion of attempted murder.

Police, who believe he was acting alone, were searching addresses in Cardiff, Wales, where the vehicle hire company that the van was rented from is based.