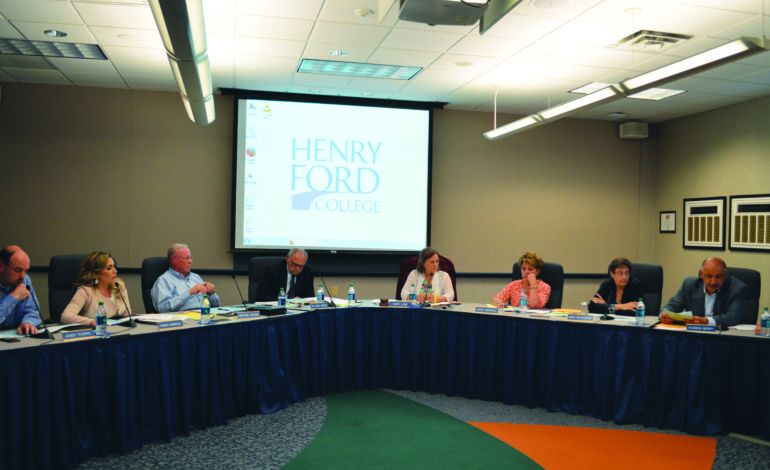 Dearborn Board of Education members discussing the appointment of a new trustee at their meeting, June 19 - Photos by The AANews

DEARBORN — The process to appoint a successor to replace former Dearborn Board of Education President Mariam Bazzi, who resigned on May 22 after she was appointed by Gov. Snyder as a Wayne County Circuit Court Judge, took a dramatic turn Monday night.  At the beginning of a packed meeting held at Henry Ford College, Board President Mary Lane announced that Celia Nasser was the new trustee since she had received the majority of the votes of the board during the June 12 meeting.

This came as a surprise to all in attendance, including some board members, since the board was expected to continue discussing the appointment until one candidate received a majority of four votes.

Lane, along with the board’s attorney, Tim Currier, explained how the 3-2 vote in favor of Nasser became a 4-2 vote thanks to trustee Hussein Berry’s abstention on June 12. They referred to Michigan law and the Dearborn Board of Education bylaws (See sidebar). Currier cited a section of the board’s bylaws, enacted in 1990, regarding the duties of a member to vote. It states that a member’s abstention from voting counts as a vote toward the majority. Since the board’s action needed a majority of four votes, Berry’s abstention achieved the required votes to appoint Nasser.

The board had already conducted interviews on June 6 with the six candidates who’d applied. Then, during their June 12 meeting, the trustees voted on the candidates they thought best fit for the job. President Lane and Trustees Fadwa Hammoud and Michael Meade selected Nasser, a local businesswoman, as their choice to fill Bazzi’s seat; Trustees Jim Thorpe and Mary Petlichkoff chose former trustee Roxanne McDonald. Trustee Hussein Berry said he was abstaining from the entire process. Berry said during the June 6 meeting that he was not going to participate in the process based on the “advice of counsel.”

But during the June 19 meeting, and after it was announced that Nasser had won in part because of his abstention, Berry gave a long speech saying, among other things, that he’d recused himself from the selection process due to his belief that it was “tainted.” He also argued with the board’s lawyer about whether his non-participation constituted an abstention within the meaning of the bylaws. Attendees at the school board meeting

Berry’s comments got heated at times, especially as he was asking questions of the lawyer; then Dr. Michael Wilmot, president of the
Michigan Leadership Institute, the facilitator of the June 12 meeting; then Dr. Glenn Maleyko, the superintendent of schools; then trustee Fadwa Hammoud.

Berry was visibly angry and at some point yelled at a man in the audience, telling him sarcastically that he had no voice. Berry questioned why neither Lane Nor Wilmot explained the abstaining rule before the vote.

Lane said that after the June 12 meeting, she looked further into the bylaws provision regarding abstentions. Officials had examined district policy and state law regarding filling an empty school board position, but the abstention rule was in a different part of the bylaws than the one addressing the  replacement process.

Before Lane swore in Nasser as the new trustee, Thorpe and Petlichkoff said they would not mind if the process was left up to the five member Wayne County Regional
Educational Service Agency (Wayne RESA), the county’s intermediate school district, assuming what was thought to be a 3-2 deadlock on June 12 remained in effect.

The board’s attorney confirmed that the trustees had selected Celia Nasser at the June 12 meeting, according to their bylaws.

Thorpe said the process left a bad taste in his mouth and he felt the spirit of the appointment had been broken, even if the rules had not.

At one point, Petlichkoff made a motion to halt the process and not seat Nasser.

“Quite frankly, I don’t care if this goes to Wayne RESA or not,” she said.

However, Currier said that since Nasser had already been selected by way of the previous vote, the board would, in essence, be removing her, which is a power vested only in the governor. Nasser walks to her seat after taking the oath of office

Lane said that time was of the essence, since the board had a duty to seat a new member within 30 days of the resignation of a former member, otherwise they would be abdicating their responsibilities and turning it over to Wayne RESA.

“How do we make a decision in an open meeting without knowing we made a decision?” Berry argued. He also continued to argue he never said the word “abstain” and that he was never actually called on to vote at that meeting.

Hammoud reminded Berry that Lane asked at the beginning of last week’s discussion if he was going to continue to refrain from participating in the appointment and he said he was.

“You don’t have to utter the word abstain for you to abstain from the vote,” Hammoud said. “Our vote is our vote. We took an oath to follow bylaws.”

A few members of the audience heckled the board regarding their decision, until Berry alarmingly erupted in frustration at an attendee to “keep his mouth shut” and that he “didn’t get to vote.”

After more discussion, Lane called Nasser forward, verified that she had already signed the legal paperwork and swore her in as a trustee while Berry continued to yell. Nasser at her seat following her appointment

After Nasser took her seat on the board, audience members spoke mostly about how concerned they were with the appointment process and some still voiced their support for Adel Mozip, who did not receive any votes from the board.

Nasser will need to run in the 2018 general election to complete Bazzi’s term, which ends in 2020.

She is the owner of three businesses in the city. During her interview, she credited her vested interest in the district’s education system to her children and her administrative expertise to being in charge of budgeting, finance, policies and procedures at her stores. She also heads an
advertising company, which has given her experiences in marketing social media strategies.

Below are relevant portions of the Michigan Election Law, the Revised School Code, board bylaws, Robert’s Rules of Order and a transcript of a portion of the June 12 meeting.

(5) A general powers school district is a body corporate and shall be governed by a school board. An act of a school board is not valid unless approved, at a meeting of the school board, by a majority vote of the members lawfully serving on the board.

(6) The board of a general powers school district shall adopt bylaws. These bylaws may establish or change board procedures, the number of board officers, titles and duties of board officers, and any other matter related to effective and efficient functioning of the board. Regular meetings of the board shall be held at least once each month, at the time and place fixed by the bylaws. Special meetings may be called and held in the manner and for the purposes specified in the bylaws. Board procedures, bylaws, and policies in effect on the effective date of this section shall continue in effect until changed by action of the board.

380.1107 Removal of board member; procedures; eligibility for election or appointment; restriction.

(1) The governor may remove a member of a school board from office under this section if the governor is satisfied from the evidence submitted to the governor that the member is guilty of gross neglect of duty, corrupt conduct in office, or any other misfeasance or malfeasance in office.

BOARD BYLAWS REGARDING
VOTING AND THE ABSTENTION

All regular and those special meetings of the Board at which the Board is authorized to perform business shall be conducted in public. No act shall be valid unless approved at a meeting of the Board by a majority vote of the members elected to and serving on the Board and a proper record made of the vote. Meetings of the Board shall be public and no person shall be excluded therefrom. (M.C.L. 380.1201) Unless specifically authorized by Michigan conflict of interest laws, any board member’s decision to abstain shall be recorded and be deemed to acquiesce in the action taken by the majority. Failure to vote, absent a statutory exception, constitutes a breach of the board member’s duty as a public official…

§ 44 Bases for determining a voting result

As stated on page 4, the basic requirement for approval of an action or choice by a deliberative assembly, except where a rule provides otherwise, is a majority vote.  The word majority means “more than half”; and when the term majority vote is used without qualification – as is the case of the basic requirement – it means more than half of the votes cast by persons entitled to vote, excluding blanks or abstentions, at a regular or properly called meeting (starts at page 400).

THE MEANING OF ABSTENTION FROM BLACK’S LAW DICTIONARY

Abstain: 1. To voluntarily refrain from doing something, such as voting in a deliberate assembly.

Abstention: 1. The act of withholding or keeping back (something or oneself); esp. the withholding of a vote.

Board Pres – “I don’t know whether trustee Berry wants to participate, he indicated that he might not want to.”

Trustee Berry – “I made a decision last week.”

Right after that, the rest of the members voted.