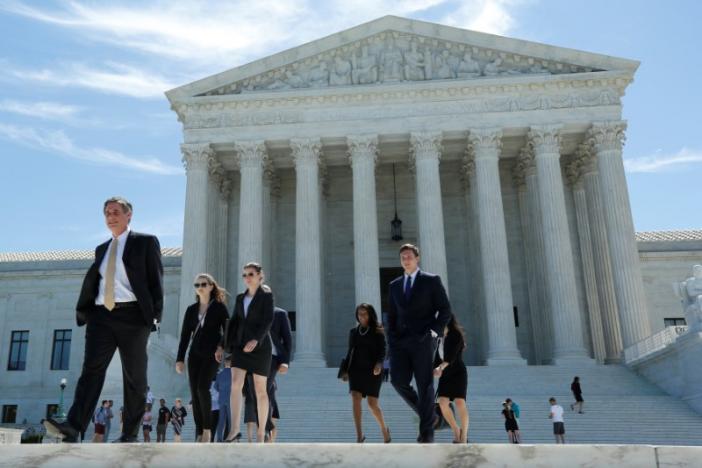 People walk out after the Supreme Court granted parts of the Trump administration's emergency request to put his travel ban into effect immediately while the legal battle continues, in Washington/ REUTERS

WASHINGTON ― The Supreme Court on Monday handed a victory to President Trump by reviving parts of his travel ban on people from six Muslim-majority countries and refugees and agreeing to decide its legality later this year in a major test of presidential powers.

The justices narrowed the scope of lower court rulings that had completely blocked his March 6 executive order that Trump had said was needed to prevent terrorism in the United States, allowing his temporary ban to go into effect for people with no strong ties such as family or business to the United States.

In a statement, Trump called the high court’s action “a clear victory for our national security,” saying the justices allowed the travel suspension to become largely effective.

“As president, I cannot allow people into our country who want to do us harm. I want people who can love the United States and all of its citizens, and who will be hardworking and productive,” Trump added.

The lower courts that had blocked the order said it violated federal immigration law and was discriminatory against Muslims in violation of the Constitution. Critics called it a Muslim ban.

There were no noted dissents among the nine justices in the unsigned decision, although three of the conservative justices said they would have gone a step further by granting Trump’s request to implement the bans fully while the legal battle continues.

The court did not give Trump everything he wanted.

His March 6 order called for a blanket 90-day ban on people from Libya, Iran, Somalia, Sudan, Syria and Yemen and a 120-day ban on all refugees to enable the government to implement stronger vetting procedures. It was blocked by federal judges before going into effect on March 16 as planned.

Both bans are now due to partly go into effect in 72 hours, based on a memorandum issued by the Trump administration on June 14. 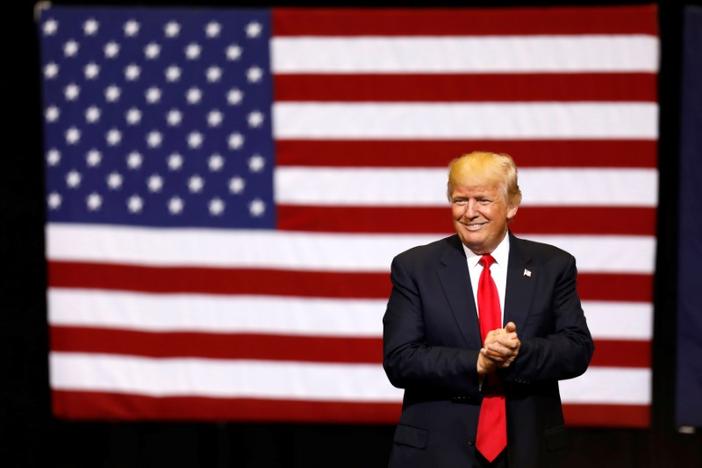 “The implementation of the executive order will be done professionally, with clear and sufficient public notice, particularly to potentially affected travelers, and in coordination with partners in the travel industry,” the Department of Homeland security said in a statement.

The decision endorsed the Trump administration’s contention that the president deserves greater deference from the courts on national security matters.

Trump signed the order as a replacement for a Jan. 27 one issued a week after he became president that also was blocked by federal courts, but not before it caused chaos at airports and provoked numerous protests.

The justices said that the travel ban will go into effect “with respect to foreign nationals who lack any bona fide relationship with a person or entity in the United States.” That means people from the six countries and refugees with no such ties would be barred from entry.

Trump’s order embodied his “America First” nationalist message and reflected his views of the dangers posed to the United States by certain immigrants and visitors.

There is likely to be further litigation over who is covered by the ban based on the Supreme Court action. Opponents of the executive order maintain that the court decision kept significant restrictions on the breadth of the travel ban because the vast majority of individuals seeking to come into the United States would have some sort of link to the United States.

“It’s going to be very important for us over this intervening period to make sure the government abides by the terms of the order and does not try to use it as a back door into implementing the full-scale Muslim ban that it’s been seeking to implement throughout the presidency,” said Omar Jadwat of the American Civil Liberties Union, which represents some of the challengers.

Even before the Supreme Court action the ban applied only to new visa applicants, not people who already have visas or are U.S. permanent residents, known as green card holders. The executive order also made waivers available for a foreign national seeking to enter the United States to resume work or study, visit a spouse, child or parent who is a U.S. citizen, or for “significant business or professional obligations.” Refugees “in transit” and already approved would have been able to travel to the United States under the executive order.

The case is Trump’s first major challenge at the Supreme Court, where he restored a 5-4 conservative majority with the appointment of Neil Gorsuch, who joined the bench in April. There are five Republican appointees on the court and four Democratic appointees. The four liberal justices were silent.

Gorsuch was one of the three conservative justices who would have granted Trump’s request to put the order completely into effect. Fellow conservative Justice Clarence Thomas wrote a dissenting opinion in which he warned that requiring officials to differentiate between foreigners who have connection to the U.S. and those who do not will prove unworkable.

“Today’s compromise will burden executive officials with the task of deciding – on peril of contempt – whether individuals from the six affected nations who wish to enter the United States have a sufficient connection to a person or entity in this country,” Thomas wrote.

The court said that Trump’s executive order distinguished between foreigners who have “some connection to this country” and those who do not, and said the government had committed to review cases for those with some connection to the United States on a case-by-case basis.

The Supreme Court left the lower-court injunctions against the ban in place, but only with respect to the challengers to the ban themselves and others in similar circumstances, meaning they involve people in the United States who have relationships with foreign nationals abroad and whose rights might be affected if those foreigners were excluded from entry.

Trump issued the order amid rising international concern about attacks carried out by Islamist militants like those in Paris, London, Brussels, Berlin and other cities. But critics have called the order a mean-spirited, intolerant and un-American “Muslim ban.”

The state of Hawaii and a group of plaintiffs in Maryland represented by the American Civil Liberties Union argued that the order violated federal immigration law and the Constitution’s First Amendment prohibition on the government favoring or disfavoring any particular religion. Regional federal appeals courts in Virginia and California both upheld district judge injunctions blocking the order.

The March order was intended to overcome the legal issues posed by the original January ban, which also included Iraq among the nations targeted and a full ban on refugees from Syria. The revised order also jettisoned language that gave preferential status to persecuted religious minorities, which critics said could be taken as favoring Christians and other religious groups over Muslims.