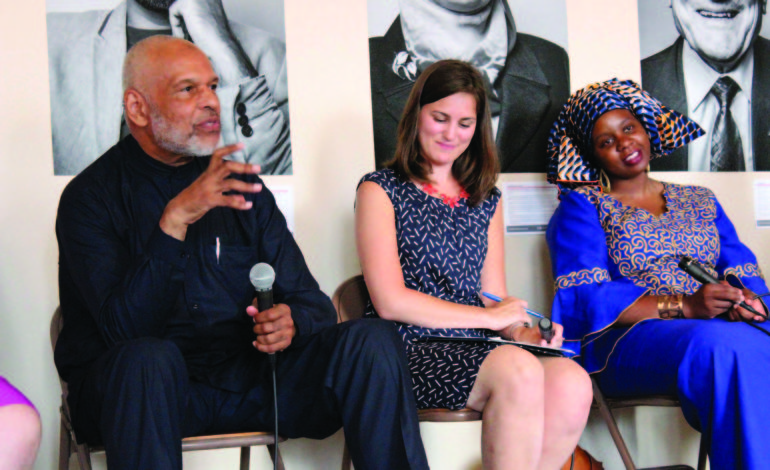 HAMTRAMCK — During the month of June, the Dearborn-based Institute for Social Policy and Understanding (ISPU) held four open viewings and one panel discussion at community space Bank Suey in Hamtramck regarding its portrait series of Michigan Muslims.

The portraits are a component of ISPU’s research titled “Muslims for American Progress” (MAP), which showcases the impact Muslims have had on Michigan in the fields of civics and democracy, education, sports, STEM, philanthropy and nonprofits, economic development and medicine.

In the style of Humans of New York, the series pairs written narratives with each photograph to give the viewer a humanized look at Muslims in America. ISPU, a Dearborn and Washington, DC-based nonprofit, is currently presenting at different locations inside and outside of Michigan to disseminate its research findings and photo narratives.

“The vast majority of media representation of Muslims in Islam is always in the context of terrorism,” said MAP Principal Investigator Rebecca Karam. “This project was to offer a very different portrait of Muslim American life and lived experiences.”

She said the portrait series brings another dimension to MAP and that the tagline of “hard facts on human faces” exemplifies the need for something more tangible regarding the Muslim population, since the majority of Americans don’t know, or think they don’t know, any Muslims.

“It was a mixed crowd,” Buageila said, “The discussion gave Muslims a platform to just share about who they are on a human level. It became very evident that night.”

ISPU provided a space for discourse among the public, some of the project team and those featured from the photo narrative. This facilitated the breaking down of barriers between those who may not know much about Muslims and specifically those featured at the event.

One of the attendees reflected on how everyone on the panel lived multi-faceted lives and that what they do overlaps with other minority groups.

“They asked, ‘What made you want to do Muslims for American Progress versus formerly incarcerated or being Black in America [for progress],'” Buageila said of one of the Bank Suey attendees.

She said that Imam Saleem Khalid responded by saying he doesn’t get to go outside and choose to be a Black man in America and he can’t step outside as anything other than 6’5.” There’s so much attention on Muslims.

By providing data on Michigan Muslims to the public, ISPU hopes the public will look to MAP for information which will help Muslims and not inhibit or harm them. If there is a collective shift in the view of Muslims due to MAP, Muslims may benefit as policymakers become more adept toward the Muslim American experience.

“This was an education project,” Buageila said, “We understand that half of all Americans have never met a Muslim and 80 percent of representations of Islam and Muslims in the media is negative. Once you have the numbers, who are the people behind the numbers?”

As the framing of Muslims in the majority of the media stymies the multi-dimensional experience of Muslims in America to the public, the participants in ISPU’s photo narrative were able to share stories about their professional contributions and life with their families. The participants were also able to be honest and raw about both current challenges and past struggles. Members of the photo narrative have also felt an impact since the unveiling of the series.

“Zaynab Salman had former students and parents of students contact her after they came across her photo narrative on social media,” Karam said.

The students and parents reconnected with Salman by informing her that they were grateful for her photo narrative, which illuminated their knowledge of her due to the personal details Salman had referenced.

Buageila said some of the public resonates with the personal interest stories. One such narrative was of Christopher Blauvelt, founder and CEO of Muslim crowdfunding site LaunchGood.com, who shared an honest account of his relationship with one of his family members.

“I believe it does a critically valuable job of humanizing Muslims and bringing us closer to our neighbors of other faiths,” Blauvelt said.

He also said he personally has not felt much change in his life from being featured, but that he loves the MAP project.

“I feel like it [MAP] helps create our inner-community diversity as Muslim Americans and expose that we are part of this country’s fabric in all ways,” said Zain Ali Shamoon, family therapist and founder of Narrative of Pain. “In many ways, this includes being in the front lines of medicine, mental health, transportation, engineering, etc.

“We are also at the center of wellness and expression,” Shamoon added.

He also recognized that improvements can be made to MAP.

Simultaneous to ISPU’s national presentation tour of the MAP project, it is in the beginning stages of doing the same quantifying data collection on Muslims in New York City. This new phase of the project is in its infancy and will use the same model the Michigan phase used. γ