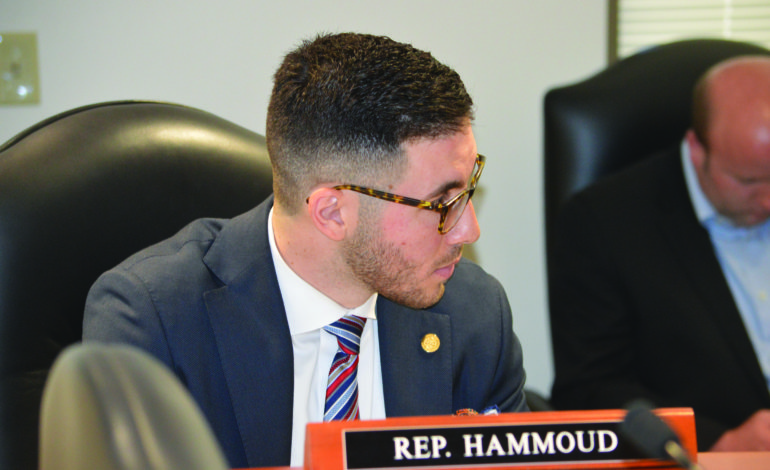 He told The AANews he felt relieved to win the race, but knew that struggle still lay ahead because “Trump might win Michigan.”

Donald Trump not only won Michigan, but the presidency, and Hammoud has found that his tone of crucial vigilant activism has become the core of his tenure in the State House.

The AANews spent a day with Hammoud in June, and observed the promising representative at work.

In his office in the Anderson House Office Building, across the street from the capitol, Hammoud underscored his aim at tackling divisive rhetoric that continues to permeate American political discourse and media.

He seeks a more welcoming approach – starting with the state legislature. 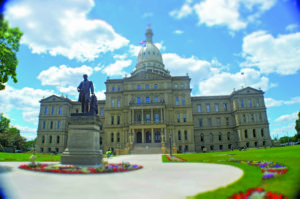 Hammoud began his morning on Wednesday, June 7 by taking a preemptive jab at an anti-sanctuary legislation set to be heard in the State House that day.

He stood before a press pool at 9: 30 a.m. to introduce a package of 14 bills and two resolutions aimed at expanding immigrants’ civil rights by enacting welcoming policies in the state.

He attributed the need for the legislation to a spike in hate crimes against Muslims and other minority groups.

Several of the bills, each cosponsored by a fellow representative, speak of strengthening community relationships with law enforcement, and one affirms that no registry will be upheld that lists residents based on their country or origin, religion or sexual orientation.

Other bills seek to support immigrant, minority and women-owned businesses.

He added that 35 percent of all fortune 500 companies in Michigan are owned by immigrants or children of immigrants.

“The data is on the side of his bill package,” he said.

Aside from thriving communities that embrace diversity, Hammoud said the bills are an attempt to spur a change in perception of immigrants that often stem from some legislators’ fear-mongering rhetoric.

“A culture change that greets my mother’s hijab with reverence, not rebuke; that welcomes my father’s accent with curiosity, not caution,” Hammoud said.

In light of the passage of the anti-sanctuary bill that day, Hammoud acknowledged his colleagues’ hesitation to support or cosponsor some components in his bill package based on value disagreements. But for himself, the bills represent American values of opening doors to sustain equal opportunity for prosperity.

The good news is that not all of his bills need to pass together; those with enough backing to pass individually could see their way into law.

Hammoud said some bills might more easily get popular support, like one designed to codify a seemingly sound law that protects against discriminatory stop and seizure practices. Michigan law is still ambiguous on the issue.

He also advocated that Democrats and Republicans alike be more explicit in supporting welcoming policies, despite the potential cost in political points.

He urged opponents of pro-immigrant policies to review the declining crime rates of cities like Ann Arbor and Southfield, both which have recently enacted welcoming measures – all the while remaining aligned with federal law.

Following President Trump’s travel ban, Gov. Snyder touted Michigan as “one of the most welcoming states for legal immigration and properly vetted refugees” but said the controversial order has prompted a “much-needed national dialogue” on immigration policy that he plans to be a part of.

Hammoud pointed to Dearborn’s questionable history with respect to minority groups. Former Mayor Orville Hubbard campaigned to “Keep Dearborn clean”, a slogan now understood to mean to keep out Arabs and African Americans, and former Mayor Michael Guido sent a flyer to every home in the city headlined “Let’s talk…about the Arab problem.”

“We have to do better,” Hammoud said. “We have to put in place policies and procedures that really showcase we’re a welcoming state. Words mean nothing these days.”

While there is opposition against welcoming efforts, Hammoud said the tides are turning enough for Republican representatives to embrace them. He foreshadowed that the 2018 mid-term elections will reveal the crucial results from reinvigorated energy about civic engagement.

“We’ve seen all the protests for science, environment for healthcare, against the travel ban, and now I’m really excited to see how that translates into the election process,” he said.

That morning, Hammoud participated in committee meetings, listening to testimonies about various bills and voting on them.

Around noon, officials and a group of lobbyists and advocates against the anti-sanctuary bill waited their chance to fill the seats in the House chamber. Almost all at the standing-room-only meeting bashed the measures.

Back at his office that afternoon, Hammoud said legislation that seeks to punish cities calling themselves sanctuary cities, or those who do not allocate municipal funds to enforce federal immigration protocol, If enacted, would mean that any city employee would be required to follow federal orders without proper funding to endure they are properly carried out.

He also said it’s no secret that some people capitalize on fear-mongering tactics for political gain, which translates into money and into votes.

When considering and voting on proposed policies beneficial to his district, but which might carry a financial burden, Hammoud said he first aims to seek reliable information regarding the short and long-term gains and losses. They key is finding common ground between what is best for the state and the weight his decisions have on the residents of his district.

For many of his colleagues, Hammoud is the first and only Muslim they’ve met, he said, adding that he does hear occasional indirect or direct racial slurs. Still, he said the majority in the House sees him as driven, with a vision.

He and some colleagues are bringing some of their fellow legislators to Dearborn, so they can see for themselves how thriving a diverse community can be. So far, about 35 of 109 House members have visited Dearborn with Hammoud.

He called for a legislative body that is more reflective of the people they serve, with more minorities and women running for office.

The only other Arab American in the state house is Yousef Rabhi (D-Ann Arbor). Rashida Tlaib, a Palestinian Muslim, represented Detroit from 2009 to 2014.

As a Muslim, Hammoud fasted during the holy month of Ramadan. He said not eating during Ramadan has kept him energized and opened opportunities for questions about why or how he fasts.

That’s partly why he hosted an iftar for all House and Senate members a week later in Lansing.

Hammoud and his staff of five are well aware of the tenacity needed to overcome the challenges of undoing intolerant policies and bureaucracy. That’s why they’re set on changing some colleagues’ and constituents’ minds through awareness and taking a more grassroots approach.

Joseph Sullivan, Hammoud’s policy director, told The AANews he is amazed by the representative’s ability to forge friendships with fellow House members, even though he’d only been in office for about six months.

Sullivan, who’s worked with four previous representatives, said his job is to help turn Hammoud’s goals and ideas into reality. He also oversees the managerial aspects of the office and helps organize town hall meetings.

He added that Hammoud, being one of the youngest representatives he’s worked for, is uniquely motivated and energetic.

While some of Hammoud’s colleagues initially dismissed his qualifications because of his age, he said that attitude changed, “once you start showcasing your tenacity and your ability and willingness to understand policy.”

That motivation is inspiring other youth to become more civically engaged, including students who visited him that day and through organizations like Emgage, a group works to get Muslims politically engaged.

Legislative intern Jeffrey Franklin said he’s worked with Hammoud for two months and that he’s shown him that it’s possible for him to pursue his dream of policy work.

“He’s given me the opportunity to make a lot of change in people’s lives,” Franklin said. “Or just bring him ideas that he actually seems excited about. He treats me as a valuable member of his team. Because of this, it’s just made my passion for this type of work grow. Representative Hammoud has already become a figure I really, really look up to and I just am really inspired by the work he’s done in such a short time.”